5 soldiers killed in collision between train and truck 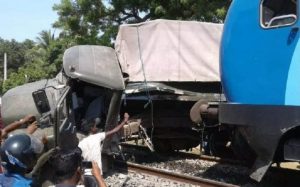 Five soldiers were killed in an accident today involving a collision between a military truck and a train in Kilinochchi today (25).

The Yal Devi train which was on its way from Jaffna to Colombo had collided with the truck while it had attempted to cross the railway line.

December 6, 2019 byTSM Web Desk No Comments
The finance ministry has issued a gazette notification banning the import and re-export of garbage.

Tourists to be subject to 3 PCR tests from Aug