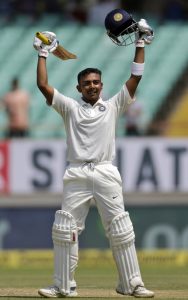 Teenager Prithvi Shaw became the youngest Indian to make a century on his Test debut on day one of the first Test against West Indies in Rajkot.

Shaw, 18, reached his hundred off just 99 balls to surpass the record of Abbas Ali Baig.

The opener is also the fourth youngest player of all time to hit a debut ton and the second youngest Indian to make a Test century after Sachin Tendulkar.

Shaw’s success on his international debut is “no surprise” to former England bowler Lucy Pearson, who was head of Cheadle Hulme School when Shaw came over to play for the school near Manchester in 2012.

“He was just stellar from the outset – you can see a lot of quality cricketers at schoolboy and schoolgirl level but he really was a world apart,” she told BBC Sport.

Aged only 12, Shaw was put straight into the first team, scoring 1,446 runs during his three-month stay, despite also having to adapt to the climate and the cuisine.

“He constantly looked like a mini Michelin man because he wore as many jumpers as he could possibly put on,” said Pearson.

“The food was beyond tasteless for him – he couldn’t understand what was the point of a jacket potato.”

She added that first-team schoolboy players saw Shaw arrive “wearing four jumpers, complaining about the food, smiling sweetly at people and thought they’d get him out no problem.

“But then he started to bat.”

‘He will be a forced to be reckoned with’

For Pearson, who played 12 Tests, 62 ODIs and the inaugural women’s Twenty20 international for England, what marked Shaw out was as much his resilient personality as his “phenomenal” ability.

Shaw, whose mother died when he was four, dedicated his maiden Test ton to his father, who would travel two and a half hours to take Shaw to training in Mumbai from their home in Virar.

“He had a real maturity for a young lad but he was also incredibly warm, good-humoured and quite cheeky,” said Pearson.

“He has very strong values, he is ambitious, tenacious and he will certainly be a force to be reckoned with over the years. This no surprise – we knew he was going to play for India one day.”

She added Shaw had “forged very good relationships” with the family he stayed with, the staff and his school team-mates because he is a “really genuine, humble, affable young man”.

Shaw, who was the first Indian cricketer to join Cheadle Hulme School on a partnership scheme set up by Samir Pathak and John Wilson, returned to play club cricket in England the next two years after his initial stay, also hitting a record 546 in a Harris Shield match back in India in 2013.

Some of Shaw’s school friends met up with him when he was an unused member of the India Test squad this summer and Pearson said her “only regret” is she did not get to see him score his debut century in England.

“But he will be back and scoring runs – sadly – against England in the years to come,” she added. “If he’s playing, I will definitely be finding a ticket.”

All-time leading Test run scorer Tendulkar, to whom Shaw has been compared, was 17 years 112 days old when he hit his first Test century against England at Old Trafford in 1990 – on his ninth Test appearance.

Tendulkar said it “lovely to see such an attacking knock” and told Shaw to “continue batting fearlessly”.

India head coach Ravi Shastri said it was a “free and fearless performance on debut” and that there was “a bit of Viru and the Master there” referring to former opener Virender Sehwag and Tendulkar.

Shaw said he was “nervous” at first but grew in confidence after he started hitting boundaries early on.

“I wanted to dominate them as much as I could – I like dominating the bowlers and I was trying that by waiting for the loose balls and they bowled many boundary balls,” he said.

Bangladesh batsman Mohammad Ashraful is the youngest debut Test centurion, with Zimbabwe’s Hamilton Masakadza and Pakistan’s Salim Malik the other two players to achieve the feat at a younger age than Shaw.

After KL Rahul fell lbw to Shannon Gabriel for a duck, Shaw and Cheteshwar Pujara (86) added 206 for the second wicket.

Grenada fast bowler Sherman Lewis, also making his international debut, had Pujara caught behind for his maiden Test wicket before Shaw was caught and bowled by Devendra Bishoo.

India captain Virat Kohli and Ajinkya Rahane then shared a century stand until the latter was caught behind off Roston Chase for 41.

Kohli batted through to the close to finish unbeaten on 72, with Rishabh Pant 17 not out.

India are hosting West Indies in a two-match Test series.

Reverse Sweep by Revatha S. Silva: ANALYSIS ACROSS PERIODS IN HISTORY OF CRICKET

April 12, 2021 byRevatha No Comments
… and what would the future hold for world cricket

September 14, 2018 byRevatha No Comments
Asia Cup cricket will begin in Dubai on Saturday, 15 September when Sri Lanka take on Bangladesh in the curtain-raiser