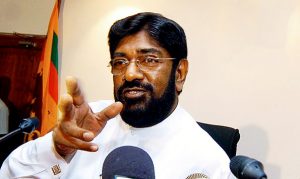 The Government has approved a $ 900 million project with Shang Properties, a sister company of the Shangri-La Group, The Sunday Morning learnt.

State Minister for Investment Promotion Keheliya Rambukwella said that the company had already invested $ 100 million on the land for the project. Rambukwella said  the land was located near the Beira Lake and would be used for a mixed-use development project.

He said that six acres of land had been allocated on lease for the foreign company for the project.

The land had been given on a 99-year lease similar to other properties given to foreign companies.

“The total investment is $ 900 million of which $ 500 million will be allocated first once we sign the deal,” he said.

The deal had been discussed with the former Government but did not move forward.

Phase I will include a high-rise residential tower and Phase II will comprise residential and retail components. The entire project will take eight to nine years to develop.

The development is to be complemented by integrated podium feature jogging tracks, a clubhouse fully equipped with swimming pools and other facilities, a garden, and car parking floors.

This is the second biggest deal approved by Sri Lanka with a foreign company after the new Government took office in November last year.

March 16, 2021 byNews Admin No Comments
The Government of Sri Lanka would be rejecting the final Resolution presented by the Core Group of Countries on Sri Lanka, which was tabled at the 46th Session of the United Nations Human Rights..