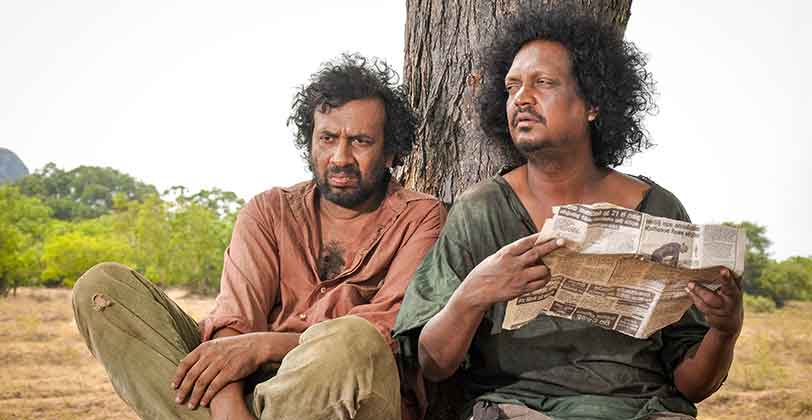 The Newspaper, co-directed by Sarath Kothalawala and Kumara Thirimadura who are also featured in the main cast, was screened at a special screening at PVR Cinemas last week at the theatre in One Galle Face and was attended by President Gotabaya Rajapaksa and Prime Minister Mahinda Rajapaksa.

The film tells the story of an unwavering friendship between two individuals on a journey to right a wrong; it is the story of two men from rural parts of Sri Lanka wading their way into the city to request a correction be printed on a newspaper which falsely accuses one of them to be a terrorist and the turbulent passage they endure along the way.

The movie premiered on 2 July and the first show at 10.30 a.m. was made open to the public free of charge. Healthcare services, tri-forces, Police, and media personnel who had been actively engaged in eradicating the Covid-19 virus are allowed to watch the movie once, using their office IDs.

We spoke to both Kothalawala and Thirimadura about the film and this intriguing time in which they are screening their movie. 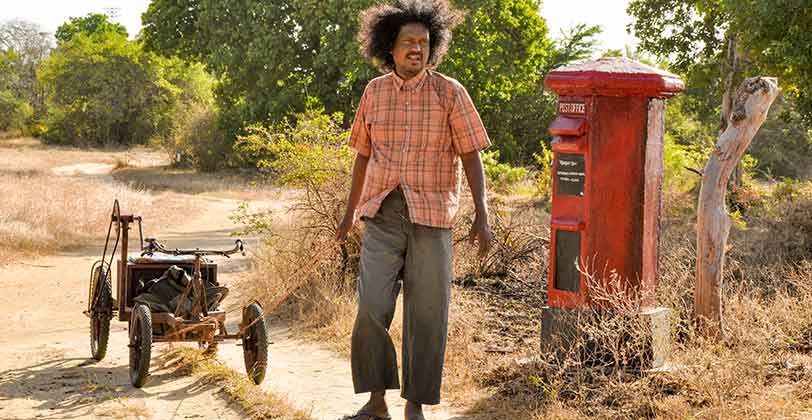 Household names in the Sri Lankan cinema circuit, especially well-known as comic actors and theatrical performers, the duo stated that they screened the film very briefly prior to Covid-19 and once the pandemic hit; like all other films, they were forced to shut down distribution. However, now with the Government having given the go-ahead for cinema halls to reopen to the public, they said it is their responsibility to provide content that would entice the public to come to the theatres.

They shared that there really is no purpose of cinema halls reopening if there are no films to be screened particularly, as certain films are being withdrawn from cinemas because it would be a loss-making move to keep it up during these times where people are less likely to come see their film.

Thirimadura stated that they have chosen to screen their film in this way because they do not mind biting the bullet if it means it would encourage people to visit the cinema halls to watch the movie, thereby keeping the local cinema industry alive as well. 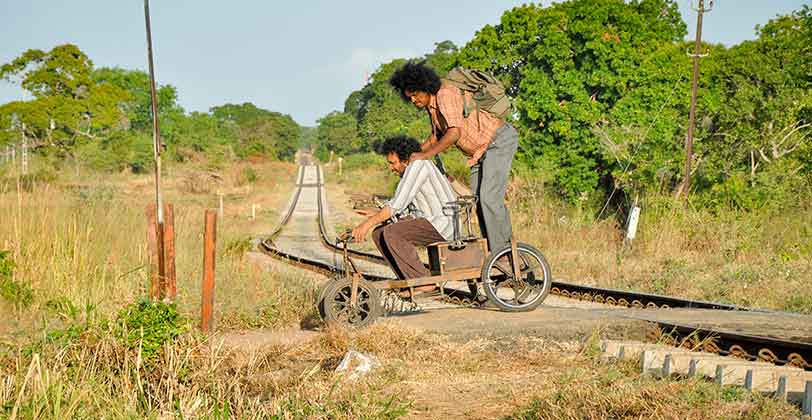 The duo also stated that as they do hail from the theatre background and are theatre people at heart, there is an underlying hope of success of cinemas reopening, lending itself to the eventual opening of stage dramas to the public as well. Their wish is that in contributing to the reopening of cinemas and hopefully providing for crowds to make their way to the cinema hall, they would in turn make it so that stage dramas too get back to normal and open up.

According to Thirimadura, while globally the entertainment industry is at an all-time high in terms of progression, Sri Lanka is still lagging behind; this is particularly due to the lack of collaboration and involvement on the part of the audiences in the island with the growth and sustenance of the cinema industry. Of course, there are numerous alternatives available now and unless the industry comes up with an extraordinary product, there is no need for the general public to spend their hard-earned money and precious time in a cinema hall.

Noting the fact that there are only 117 cinema halls in this country, which is shockingly low, he said live theatre and cinema are a dying art as technology and streaming has made it so that people would rather stay at home to watch new releases at home. 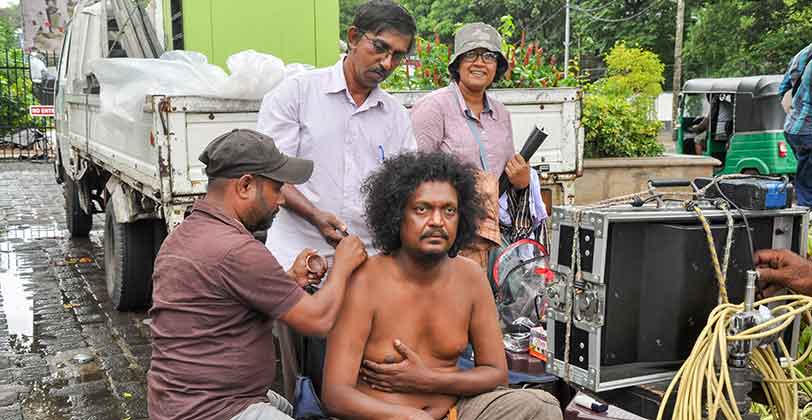 Thirimadura further shared that in Moratuwa, where he spent his childhood running from one film to the other, there was a total of six halls – namely, Tower, Emess, Manel, Vijitha, Odeon, and Padma – out of which four have been closed down. He said when he first heard that Odeon might close down, his heart skipped a beat and he was overcome with a melancholic feeling because that is where he has caught so many cinematic masterpieces that have inspired him to this day; it had been a place that holds a special place in his heart.

“I was devastated when I heard it would close down. It is a shame that this is the state the local cinema industry has come to,” he emphasised.

While The Newspaper has been highly anticipated, there was another element that was cause for intrigue even before its release – it was co-produced by Co-Cabinet Spokesperson Dr. Bandula Gunawardana, Ravindra Guruge, and H.D. Premasiri.

We asked both Kothalwala and Thirimadura about the involvement of a prominent political figure in the country, particularly at such a time when the election is coming up and the political sphere is charged up. They both stated that they are not and have never been the type of people who wish to be entangled with politics, and while the nature of our country is such that one cannot speak or think entirely in isolation without the involvement politics, their film is not a piece of propaganda and you are sure to know this when you watch the film. They said they see no reason to either hide the involvement of a political figure or distance themselves in anyway.

They added that, however, if ever there was anyone who should be recognised for their contribution to cinema, they would have to say it is Minister Bandula Gunawardana as he has been a part of some of Sri Lanka’s cinematic masterpieces and facilitated the creation of them. 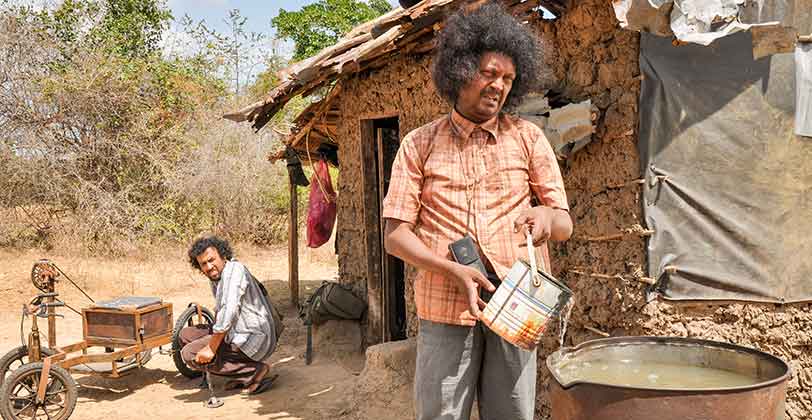 With regard to the co-production credit on the film, The Sunday Morning Brunch reached out to Minister Gunawardana. “I have been making efforts to be a part of good cinema in Sri Lanka for about 37 years now. At first, I wanted to help make Dharmasiri Bandaranayake’s debut film Hansa Vilak, but I was unable to do so. However, in 1987, I was able to make his film Suddhilage Kathawa which went on to become the Best Film in Sri Lanka that year. Then in the case of Siri Medura, I brought down Parakrama Niriella to direct it, which went on to win nine awards that year including the Best Film. I gave Ayoma starring Swarna Mallawarachchi to Parakrama as well because I have already seen what he can do.”

Speaking about the current film, he said: “As for this particular script, Thirimadura is an old student of mine and I saw that he has written a great script and that they were making rounds trying to find someone to produce it for them. They were told that since they are theatre folk coming from the theatre background, they should bring in somebody else to direct it. But I felt that if they wrote the script and will be acting in it, then they are best to direct it too. The concept in their heads cannot be executed better through an outside perspective.”

The Minister went on to add that he has cared deeply about local cinema for years and hopes only to contribute quality productions that we as people can be proud of, through which it will gain worldwide recognition while being entertaining to all.

“I have made my best efforts to support good local cinema; back in the day, there was a system where the (National) Film Corporation would provide funds for filmmakers to produce films. However, that is no longer available. In order to support work such as this, I brought Ravindra Guruge and H.D. Premasiri and created the company which will function not as a profit-making entity, but one that will aid filmmakers in a corporative way. If there is a profit to be made, then that will go into a trust to be used for other good films,” he said.

He added that with the accreditation those involved in the film have received, he is glad to have been a part of something that could contribute significantly to Sri Lankan cinema.

Co-directors and stars of the production Kothalawala and Thirimadura stated that they believe their part of the deal is now complete; it is now up to the Sri Lankan audiences to show their support and play an integral role in reviving the local cinema industry. They said that they have created a piece of art they are proud of and hope it will be well received. They invite all Lankans to go and see the film in theatres and have an enjoyable time. 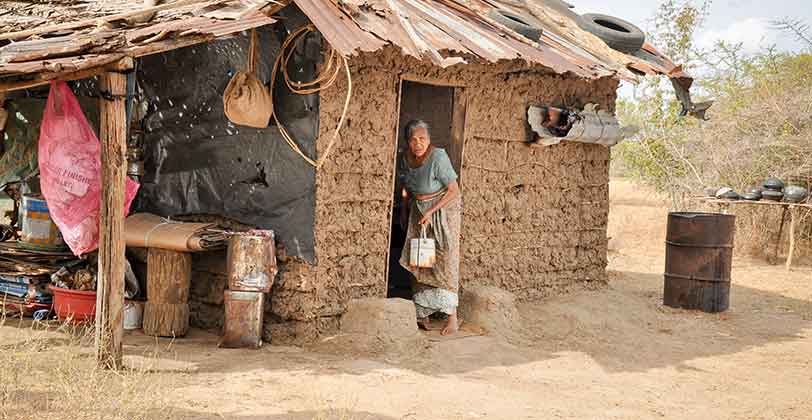 June 11, 2021 byNews Admin No Comments
Ruwantha Dhananjaya is just 21 years old, and yet he has done more travelling than most of us I’m sure. After the first lockdown, Ruwantha seized the opportunity, when tourism was non-existent and hot