A chat with Buddhilini De Soyza, the Lankan shortlisted for the BBC Wildlife Photographer of the Year Award

September 15, 2021 by Venessa Anthony No Comments

Buddhilini De Soyza, an investment banker by profession, has an avid love for wildlife photography. In her spare time, she travels the world, taking pictures of whichever animal piqued her interest on the day. She was recently shortlisted for the BBC Wildlife Photographer of the Year awards. 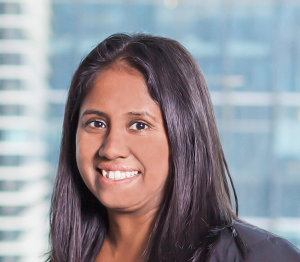 De Soyza has been visiting wildlife parks in Sri Lanka since she was a kid with her dad, who is a big wildlife man as well. So photography, a hobby she embarked on 10 years ago, just seemed like a natural extension of her love of nature.

The picture worth a thousand words

The picture that got her shortlisted for the award was of a cheetah swimming; a photo that was taken in January 2020 in Masai Mara, Kenya. Talking about the day of this capture, De Soyza described: “That was my eighth trip to Kenya; my main reason for going back was the five cheetahs found in the town of Bora. We’ve seen them and photographed them before, but we wanted to do so again.” Setting the scene for us, she explained that in January, the weather conditions are quite nice and the area is lush and green, but on this trip, once they landed in Kenya, there was incessant and unseasonal rain. “The rainy period hadn’t ended; it usually fades in December. When we got to the Mara river, the banks had broken and flooded all the villages; it was an absolute mess,” she informed us. Shortly after, they learnt that the five cheetahs that they specifically wanted to photograph were stuck on the other side of the river and they gave up hope that they would get to see them. On the second day, their guide, who was also their friend, got news that the five cheetahs were approaching the river. “They had done this the previous days as well, obviously trying to cross and get off the side of the river.”

Upon hearing this, they went up to the rice to check how rough the waters were; they were greeted with the site of extremely rough waters with bed sheets and mattresses floating on the river as the camps nearby had also gotten flooded. 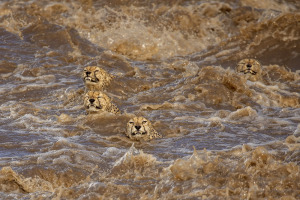 “We didn’t think they’d cross, but the thing about wildlife photography is that we never know what the animals will do. We found them mid-morning and spent the whole day watching them go up and down, patrolling the river,” De Soyza informed us. The lead cheetah waded into the waters a couple of times, she told us, but never actually started the journey; he would always turn back and go back. They spent seven hours watching them and then late afternoon, once they had actually given up hope, the lead cheetah jumped into the water and the other followed in quick succession. One cheetah hesitated, so she could only get four cheetahs in the shot. De Soyza dubbed this as the reason why that particular shot was highly commended. The cheetahs drifted about 100 m downstream before they hit land, and De Soyza told us that this particular shot was taken once they hit a particularly turbulent part of the river, where they are pictured grimacing with the effort to get across. “We never thought they’d make it, but we were left overjoyed when they did,” she exclaimed.

This photo is also really special because it depicts the repercussions of human-induced climate change.

Sharing her thoughts on being shortlisted for this award, she informed us that she was incredibly happy, since it’s such a competitive award. It’s actually known as the Oscars of the wildlife photography world, and is that one competition where everyone wants to win the award. She also commented that the awards are dominated by professional photographers in the industry; so De Soyza qualifying, despite not being a professional, is quite an impressive feat.

“I’ve never submitted before, because I never thought my images were good enough. But when most of my mentors, especially Rukshan Jayawardena, got in touch with me and told me to submit it, I decided to go ahead with it,” she further added. Jayawardena is the only other Sri Lankan that has been commended at this competition. De Soyza told us that when she submitted the capture, she wasn’t expecting much, but she knew it was an inspiring click, so she hoped it would at least make the top 100, which is the number of photographs that are usually chosen for the exhibition.

The road of a wildlife photographer 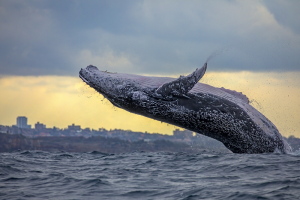 Apart from this picture, another that she holds close to her heart is again a picture she took on the same trip. She spent an entire day with a super tusk, who passed away six days after she saw him. That was a special moment for her because there are only a few super tusks remaining in the wild. She also told us that during lockdown, she spent a lot of time whale watching humpback whales in Australia. These whales are known as acrobats of the sea, and for her, watching a 40-tonne animal jump out of the water is an unbelievable feeling; one that makes her heart sing every single time.

She also spoke to us about some challenges that photographers in her field face. Unlike other photography, your models are animals and you can’t direct them; they will usually do what they want. “When photographing, we try not to interfere with their natural behaviour so it’s an extremely rewarding act, but it’s also extremely frustrating,” De Soyza stated, adding that sometimes you can wait for hours and still not get the shot you want. Despite that, it’s still amazing since you get to watch something very special because they’re showing you a part of their lives. This is why she finds her photography to be extremely rewarding, even though it can be so frustrating.

According to De Soyza, in the field of photography, practice makes perfect. “You don’t have to travel to exotic locations to get really good shots. The best example of that is Gagana Wickramasinghe’s shot of a parakeet that he took from his balcony. This shot was also highly commended in the 10 and under category.” She emphasised that photography is all about being aware of what’s happening around you and being ready. As a wildlife photographer, something she always tells other people off the bat is to be an ethically responsible photographer. Unfortunately, she observed that there is a breed of photographers out there who will do anything for the shot. “They don’t think twice about disturbing animals or think about what the impact of their actions is on a particular animal. I’ve seen photographers get in the way of animals hunting, and as a result those animals go hungry, I’ve seen photographers disturb nests, which puts the hatchlings in danger.” She highlighted that it’s extremely important that photographers be an animal lover and a conservationist first.

Breaking down stress the Ayurveda way

June 21, 2021 byNews Admin No Comments
Stress has become an inevitable and the most unwanted companion of society. When our lives become full of desires, demands, workloads, deadlines, frustrations, irritations, and squabbles we push ours