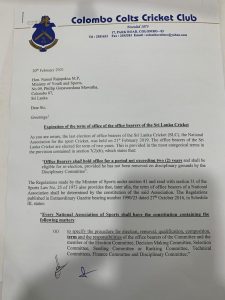 The Colombo Colts Cricket Club’s request from the Minister of Sports Namal Rajapaksa to appoint an interim committee, in a letter dated 20 February 2021 (see inset picture), may understandably have an effect on the 15 March Appeal Court hearing of the plea of a group of people, including former SLC administrators, to make major changes on the national cricket administration, citing a downfall in the game in recent times.

A source said that on a previous instance too, under Sports Minister Faszer Musthapha of the previous Government (2015-19), a Competent Authority (Kamal Padmasiri) was appointed to run the affairs of SLC after the term of the SLC elected body, under President Thilanga Sumathipala, ended in June 2018.

Sports Minister Musthapha, who held office as Sports Minister from April to November 2018, appointed Sports Ministry Secretary Padmasiri as the Competent Authority to take over SLC after President Sumathipala’s term came to an end in June.

The cricket board elections had been delayed that time following a court order. Musthapha then assured reportedly that he would be taking steps to hold election before 31 July the same year.

How the present Sports Minister is going to react to Colts’ request looks interesting particularly in a context where one of the said letter’s signatories, Nishantha Ranatunga, is allegedly a close confidante of the present dispensation holding Chairman’s post of the present National Water Supply and Drainage Board.

Overtly, Minster Rajapaksa has aired his displeasure over appointing an interim committee to run cricket in Sri Lanka expressing his reasons as they (interim committees) are not responsible bodies and have caused massive loss of funds of the cricket board during their previous tenures.

Our effort to contact a senior SLC cricket official to get to know their response to the matter failed last evening.

A Timeline: The glorious rise of Afghanistan’s cricket

August 18, 2021 byRevatha No Comments
The swift development of Afghan cricket to the top