A great achievement by a young team – Timothy Nithushan 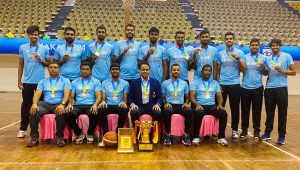 Introduced in 2002, the SABA Championship had been held eight times now, including the 2021 event which was staged at Shaheed Suhrawardy Indoor Stadium in Dhaka, Bangladesh from 15-19 November.

Won two out of three

Four countries out of eight regional federations took part in the tournament this year. They were Bangladesh, India, Maldives, and Sri Lanka.

At the start of the tournament this year, India had the best world country ranking out of the four participating countries. They were ranked 78 as Sri Lanka (132), Maldives (142), and Bangladesh (146) followed consecutively.

Overall, there were six matches this time. Sri Lanka played three. They beat Bangladesh on 15 November to a score of 67-56, lost against India 114-48 on 17 November, before beating Maldives 77-45 on 18 November.

In fact Sri Lanka had won the SABA Championship when it was held last time, also in Dhaka, in 2018. That time hosts Bangladesh were the runners-up.

In 2013, Bangladesh won the title beating Pakistan in the final. 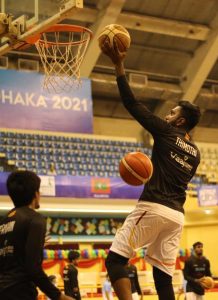 Timothy Nithushan in practice session at the SABA Championship in Dhaka

Following are excerpts from an interview with Sri Lanka national basketball team’s Timothy Nithushan, mainly on the country’s achievement at the recent SABA Championship. Born in 1991, the Batticaloa-based forward played a key role in Sri Lanka’s campaign.

Q: Can you explain briefly your basketball background and your involvement with the Sri Lanka team?

I am from Batticaloa and I played for St. Mmicheals college in my college years. In 2014 i was first selected for the srilanka mens national team. I also represented SL Navy and Hambantota sports club in the locat tournaments. I was also a member of the Sri Lanka 3×3 mens team in 2017 and 2018

Q: Please explain about the importance of the SABA Championship runners-up achievement this time

SABA Championship is only played between South Asian nations. The tournament is considered as a qualifier for FIBA Asia Cup. So it was very important for us to be among top two in the region.

Q: How has Sri Lanka faired in the tournament in previous years?

Sri Lanka always played really well in the South Asian region. We never missed an opportunity to place in the top three since 2014 in SABA Championship. Only India gives us a tough time.

Q: How was the campaign this time? A word on how Sri Lanka performed against the other nations

This time was very different from previous other tournaments we had participated in. That is because we had to leave our loved ones behind and got into a bio bubble due to Covid-19 fears.

It wasn’t an easy task but as a team, we stayed together and overcame the tough times. We performed really well in this tournament since we had good practice. Our only loss came against India. We beat Bangladesh and Maldives to get the silver medal. All the youngsters stepped up and showed their character which is a good sign going forward.

Q: A word about the team and coaches. What from here? What are the challenges coming up in near future?

This team is very young. There are very, very experienced players too who have been in the scene for many years. Their contribution in this tournament was superb and they always helped the younger players by sharing their experience.

The main challenge is to play well in the next qualifiers and get into the next round. We have already started our individual training sessions. Therefore we all are expecting a better result in the coming tournaments.

January 1, 2020 byRevatha No Comments
Sri Lanka team will leave for India on 2 January to play a three-match T20I series