A liquid gold potential: Discussing Sri Lanka’s need for a vision for kithul with Chanchala Gunewardena

June 13, 2021 by Jennifer Anandanayagam No Comments

Big picture people are known to be creative, strategic, and visionary. When I came across The Washington Post article on Sri Lanka’s kithul produce and its potential in the global market, and the insightful comments from Kimbula Kithul Founder Chanchala Gunewardena, it was apparent that she was a big picture thinker. Perhaps it’s her past experience of working in communications, advocacy, rights, and education, or perhaps it’s something more inbuilt, but with her venture she started in 2017 – Kimbula Kithul – Gunewardena is trying to put Sri Lanka on the map in a big way. Named in honour of the crocodile in her mother’s native southern district of Matara, Kimbula Kithul’s low GI (glycemic index)-certified and vegan kithul is tapped, refined, and bottled in its purest form. 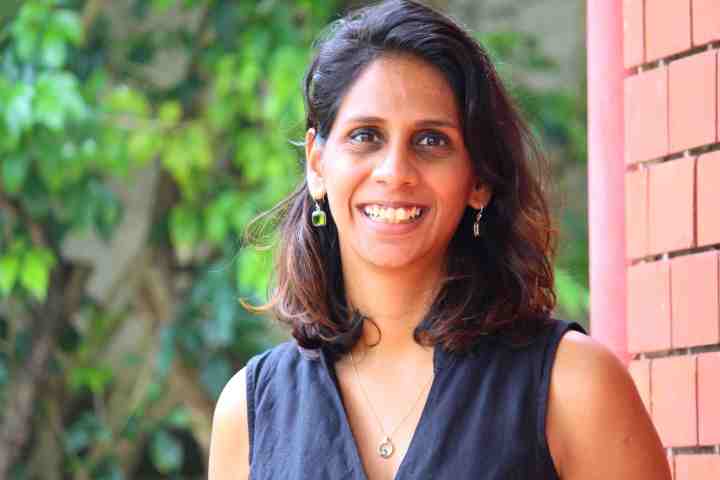 “I realised that not a lot of people knew that story. We have been tapping kithul the same way we’ve been doing for centuries since the trade has existed” Kimbula Kithul Founder Chanchala Gunewardena

The kithul industry in Sri Lanka has a long history. Essentially a family affair, kithul tappers have preserved and eventually passed down the craft that goes into making this island secret to their children for generations. Once the masterful tapper climbs a nearly-40-feet-tall kithul (fishtail palm) tree on a handmade ladder, sometimes three to four times a day, he uses his knife to make sharp incisions at the base of a cluster of flowers. He then ties a jute sack to the base and leaves it there to collect the droplets of sap trickling down. Over the next several days, he will climb back up to collect the sap. The womenfolk in the family then spend hours turning this translucent yellow sap to form a syrup by dehydrating it over heat. What’s left – in its purest form – is a syrup of woody, floral, smoky, and even savoury notes.

Protecting and offering this purest form of kithul is something Gunewardena holds close to her heart. Although Kimbula Kithul products are made using 100% pure kithul tree syrup, this cannot be said of most others in the kithul-making industry in Sri Lanka. Mass sourcing and production of the syrup has resulted in adulterating the original syrup by adding refined sugar to it. A tapper’s job is one that involves high risk, braving insects, and a steep climb. The standardisation of its taste to “sugary” has, although resulted in bigger quantities of the produce made available in the local market at cheaper prices, undervalued the craft of kithul-making.

Gunewardena wants to maintain authentic produce, and although this means a higher price of product, she is hopeful if a higher demand can be created for the unadulterated kithul primarily in the global market, Sri Lanka can reinvest into the industry and take care of its kithul farmers. What Gunewardena and some other authentic kithul vendors in Sri Lanka are trying to do is return to the roots of this rich syrup and work with farmers directly to select, refine, and craft small batches of pure kithul.

It would be apt to observe that Gunewardena is an impact-oriented person. “The business or anything I’m involved in tends to draw me and hook me in because I see it in that way,” she shared, speaking to Brunch. Talking about how Kimbula Kithul started, she said that upon tasting some unadulterated and pure “incredible bottles of kithul”, she asked the all-important question: “Why isn’t this out there?” Only when she went searching for the story behind it did she find the challenges associated with the craft. “I realised that not a lot of people knew that story. We have been tapping kithul the same way we’ve been doing for centuries since the trade has existed.” Looking at the Kimbula Kithul Instagram page, it was clear that Gunewardena wanted to share the story behind the industry as well.

Although there have been some interventions in the industry, Gunewardena feels that the fundamental issues that the tappers face haven’t changed in any significant way. “One of them is actually the value of the craft and also the craftsmanship of the skill.” Infrastructure for tappers is another area where nothing much has changed over the years. Although there’s been small developments like new ladders for tappers and some safety equipment, in reality, there is a big disconnect in knowing if these small interventions are actually things tappers can successfully use. According to Gunewardena, what will move the needle is the actual valuing of the craft.

From being a royal delicacy centuries ago, kithul has, today, largely become a product that has been scaled by adulteration to meet demand. Instead of taking the route of building the right infrastructures to preserve the value of the craft, we’ve responded by trying to meet the demand as quickly as possible – by adding sugar and diluting the product. “So the product becomes cheaper and cheaper because essentially you’re trading off having pure kithul with having sugar. You’re also fundamentally crippling the ability of the people who make it to sustain a livelihood.” 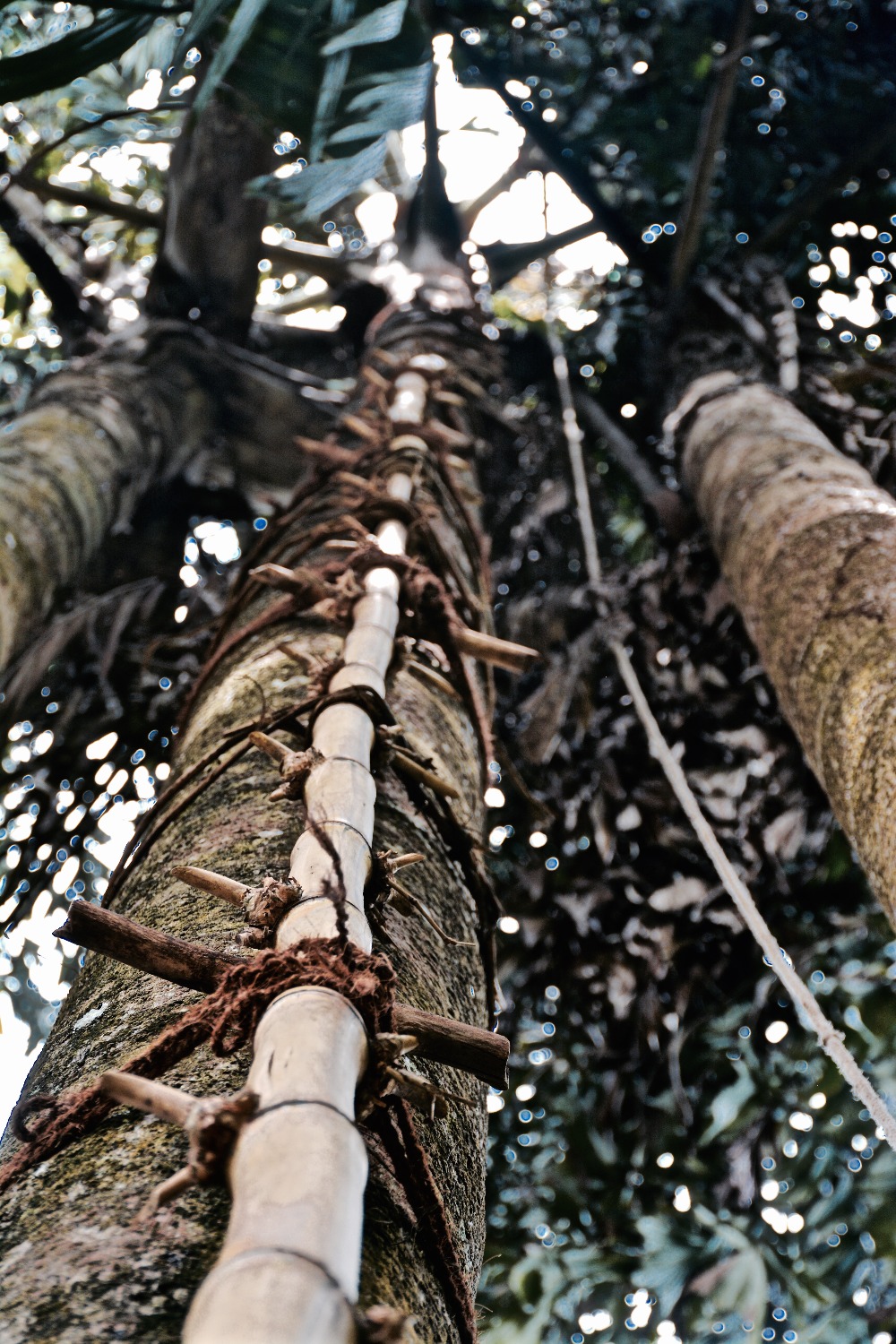 Gunewardena stressed that this is a large-scale and long-term problem. “When you don’t put the right systems in place at the get-go, down the line, it definitely faces the repercussions of falling apart.” She also feels that we’ve never really had a vision for this product. “I think it was definitely one that wasn’t seen for its potential.”

Canada dominated over four-fifth of the total global sales ($ 392.8 million) for maple syrup in 2019, with 62 other nations selling much smaller amounts of maple syrup-related products in global markets. The country has very successfully marketed the slogan within the maple syrup-consuming public in western countries: Without maple syrup, one cannot have a complete breakfast – essentially pancakes, a very popular breakfast item on their menus.

As also observed by scientist Dr. Premakumara, the glucose and fructose content in the kithul syrup is extremely low and as a result, in the GI, this syrup is ranked as a low GI food. Unrefined sugar syrups such as kithul, coconut, palmyrah, sugarcane, or maple, according to Dr. Premakumara, are better than refined white sugar. In addition to being a low GI food, kithul also contains many health-promoting minerals and acids – polyphenols which are antioxidants, organic acids which are bioactive, amino acids which have many functions, beta carotenes that produce vitamin A, and ascorbic acid or vitamin C that improves immunity.

“There’s a 10-year potential window in which we can preserve, rescue, and rehabilitate this product and its community before we lose it forever,” shared Gunewardena. She explained that there is a decline in the craft being passed down generationally as well. “If we do not do the hard work, or the reimagination of this now, then we also lose the ability to have the opportunities to do all the things that we can with it.” 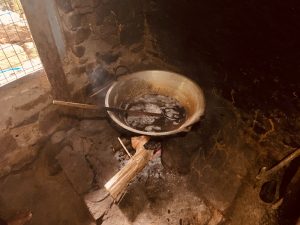 A craft in need of urgent resurrection

Risk and high investment are inherent in kithul cultivation and tapping. There’s also the fact that it takes time to yield returns. Changing social norms within the community of farmers have resulted in families wanting their children to pursue professions that are more stable. Despite the potential of the product, which Gunewardena seems to see more so than most, kithul tapping is becoming somewhat of a vanishing craft. Tappers are, for good reason, turning to more lucrative professions. It is not uncommon to see kithul tappers engaging in a few other cultivations like tea, rubber, vegetables, etc. to make ends meet.

Initiatives like the Good Market, where Gunewardena herself has met like-minded entrepreneurs, are doing their part to preserve the quality of the craft and produce. Speaking about what the Sri Lankan Government can be doing for the industry, Gunewardena shared that what she’d like to see is a secure international certification of pure kithul’s low GI and other properties based on the years of hard-won research already done by Sri Lankan scientists. She added that “accessibility to better packaging for entrepreneurs, so you don’t have to be only an established or well-funded enterprise to design a well-packaged and more premium product and brand” would also be a welcome intervention by the Government.

“I definitely know that my vision for this product has to exist in Sri Lanka, but also elsewhere just for it to sustainably come back around to a point one day when I hope Sri Lanka can scale this product so that it’s much more accessible locally,” shared Gunewardena.

“Our price point is pretty artificial to me. It’s just a number; it really doesn’t have a full covering of any of the things we do. We’re also a small batch production and we’re essentially shortcutting all the things that we don’t have, which in a way also makes it expensive. So only in a market outside can we actually have something where I can save and reinvest into this – to pay the tappers what I actually think they need to cover up the value.”

Outside of Sri Lanka, Kimbula Kithul products are available in the UK and a limited supply can also be ordered through their website for delivery in the US. The product is also heading soon to Australia and Singapore.

I asked Gunewardena what her hope for the kithul industry is 10 years down the line. “I hope it’s still there. I know that sounds bleak, but that’s really the bitter truth of this sweet story,” she said. Kithul, according to her, is either believed in and invested in, in a thoughtful way today – particularly in terms of its craftspeople – or it will no longer exist.

“If in 10 years kithul tapping is ongoing, it’s been passed to a new generation, and that pure kithul is celebrated globally, it will only be because we have done the right thing by the people who are fundamental to crafting it. I hope we get there. I know I’m definitely going to try.”

The bitter truth with Kapila Rasnayaka

November 25, 2018 bythemorninglk No Comments
“I believe we are all members of this planet and that’s it,” Founder of Voices of Humans Kapila Rasnayaka

Sri Lanka’s mastery in the art of cooking