A look at the unique Kandy Esala Perahera

The Kandy Esala Perahera is considered to be the oldest cultural event in the world with its colourful, glamorous splendour, making it an out-of-this-world experience. The Kandy Esala Perahera Casket, which is considered as the living Lord Buddha, is paraded in the streets and worshipped by the divinity, humanity, and the elephants during this event. For many decades, the perahera has been held continuously, with thousands of spectators from around the world coming to view this cultural event. This year, due to Covid-19 pandemic rearing its head once more, the perahera is to be held virtually from 13 August and will last till 23 August in the Kandy Sri Dalada Maligawa, with about 100 elephants and about 5,600 traditional artists including dancers to perform at the procession. 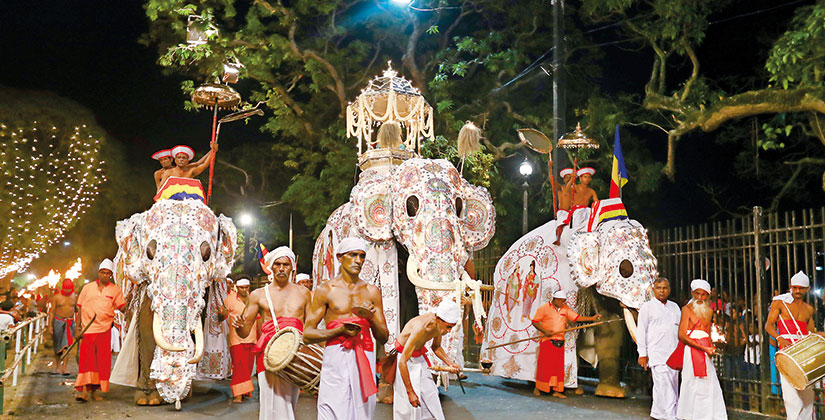 The Sacred Tooth Relic, which is housed at the Temple of the Sacred Tooth Relic in the city of Kandy, is considered and worshipped as the living Lord Buddha. For this very reason, there are daily, weekly, and annual poojas and rituals. The Dalada Perahera, famously known as the Kandy Esala Perahera, held in the month of Esala (July) annually is among them. It is considered as the epitome of the country’s Buddhist celebrations and is blessed with divinity.

According to Maha Parinibbana sutta of Deegha Chapter, among few other sacred relics, the four sacred tooth relics remained intact following Mahaparinirvana. Lord Buddha’s left canine tooth out of the four tooth relics which was blessed with Sri Saddhamma for 45 years was brought to Sri Lanka due to the continuous conflicts during the reign of King Mutaseewa in the kingdom of Kaalinga.

As important and cultural as this event is, we must ask ourselves if it is worth risking the lives of those performing, which by way, could lead to another outbreak of Covid-19. Many debates have sparked online whether it is absolutely necessary to host the perahera this year, when the country is once again crippled with a surge of Covid-19 cases, only to be met with every typical Lankan’s argument of “it’s tradition”. This mindset of culture and tradition has been the downfall of Sri Lankans many times before, is this going to be yet another time?

Brunch spoke to some medical professionals to find out.

In conversation with Sri Lanka Medical Association (SLMA) Council Member Dr. Surantha Perera, he noted that culture and traditions must be compromised to adhere to the health guidelines. With that said, he also commented that as Sri Lanka is a country that is big on traditions and the Esala Perahera being one of the major cultural events of the country, it was improbable to think it wouldn’t be held. Thus, there must be strategies in place for the participants in order to avoid a cluster being formed. He suggested that we limit the number of people that would have the privilege of attending the perahera, and limit it only to special invitees. There is also the question of whether it is necessary to host the full pererhara or only a segment. “The participants should also socially distance themselves while performing. An easy way to worm out positive participants is to perform RAT tests beforehand, again lowering the chances of a spread.”

As the participants need a location to eat and sleep, special areas should be allocated so they have the space required to maintain social distance, “Since schools are closed, classrooms can be offered to the participants and limit the room to maybe five people per classroom,” he suggested.

He also informed us that there were a few people that wanted to protest against the perahera, which is completely redundant because the protest itself may cause another spread. “Adults need to be more responsible and think things through before they act on it.”

Dr. Perera stated that there is a chance that the positive cases post perahera will be high, but if organised properly, this can be prevented. “What should’ve happened was that the whole group should have been given both doses of the vaccine, and waited two weeks for it to kick in and then have RAT tests performed to ensure that there will be no spread.”

Health Service Office Kandy Regional Director and Medical Officer of Planning Dr. Nuwani Weerathunga stated that so far, what is expected is that a similar procedure to last year will be followed.

She said that what was recommended and was implemented previously was that the performers and all of the artists will be housed together entirely for the 10-11 days, during which they will be participating in the festival. They will be kept in their own separate bio bubbles, in allocated spaces, and will not interact with the other troupes. During the procession, as it is similar to a queue, she said that they will maintain the required physical distance from each different group and participate. All of these performers, dancers, musicians, etc. will all be vaccinated. Additionally, she said that they have all received the first dose of the Covid-19 vaccine, and on 29 and 30 July, they will be receiving the second and final dose.

As for the decision as to whether they should allow the public to visit and view the procession, Dr. Weerathunga stated: “The health sector’s official stance is that we advise and oppose the allowing of the public to come and witness the procession”. She added that experts have speculated and forewarned the potential of a fourth wave and we must take all precaution to soften this blow.

Last year they did block all the streets that were on the perahera route, and did not allow anyone to crowd to the sides of the streets. Commenting on this, Saman Jayawickrama of Charlton Kandy Rest said: “If there used to be a thousand people on the road, it seemed like only 40 watched the perahera last year, most of whom were residents from the nearby apartments and business owners,” he said. He added, however, that while nothing official has been announced, the Police shared with them that it is likely that they will be allowed to watch the perahera this year.

We can only hope that the right procedures will be strongly enforced and followed, taking into consideration that Kandy is currently a hotspot for Covid-19, and that no spread will take place from there at the end of the perahera.

October 3, 2021 byNews Admin No Comments
Friday, 1 October, marked Children’s Day in Sri Lanka, an event that raises public awareness about child rights and protection. This week, Brunch decided to focus on the situation children have faced

Danceworld – dancing their way onto the global stage

April 7, 2019 bythemorninglk No Comments
Danceworld is a school of modern, jazz, and ballet situated in Colombo, dedicated to inculcating the passion of dance in young girls in the island.