October 6, 2021 by Venessa Anthony No Comments

As the number of infections and deaths brought forth by the pandemic began to rapidly rise, a group of like-minded Sri Lankans noticed that the ways deaths were being reported had become even more abstract than before. Whereas early in the pandemic the government press releases gave out more specific details of some of the people who died each day like their age, gender, hometown, and causes of death, after June 2021 this changed to just numbers and tables. 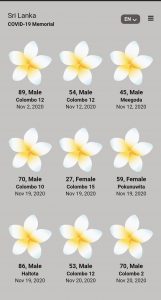 In conversation with two members of this group – De Sayrah and Perera – they noted that this is something they’ve seen happen in the past as well, with the war, tsunami, and other crises, and they wanted to try and challenge this to show that behind each number is a person with their own identity and story. So together with a team of people that empathised with these feelings, they put together a memorial to honour the victims of Covid-19.

Through this memorial, they hope to remember them as more than numbers; they are civilians and healthcare workers – spouses, siblings, parents, children, friends, and loved ones. Each individual has their own story, and leaves behind a unique legacy.

When talking about the reason that this memorial was created, they explained that upon realising that grieving has also become an isolated and isolating experience given the lockdowns and other restrictions, this felt like a way to reclaim some collective catharsis over what is going on.

They also realised that even though people kept track of the daily count of deaths, citizens weren’t really getting a chance to grapple with the scale and enormity of what is going on, and consider which areas and communities are most affected by the state response to the pandemic. So several of them who had been thinking about the possibility of a memorial came together – many connected only through social media – to create this.

The memorial uses flowers to symbolise people; we asked them what is the significance and inspiration behind this design. “We thought the araliya flower was a simple and also powerful visual that many Lankans could immediately identify. In addition, flowers are a key element of mourning rituals, rituals that many of the families who lost loved ones to Covid were not able to perform due to health guidelines,” they explained.

They further added that Thilini Perera, who helped create it, tried a few options before they collectively decided on the araliya flower. The idea for this symbol drew inspiration from a design by Rochel Canagasabey, who created an infographic that was one of the first digital memorials to the lives lost in the pandemic.

The lack of thorough data is an enduring obstacle that the team behind the memorial was faced with. They thought of doing this first stage of the memorial using just the data that is publicly available, which meant matching the daily death count recorded by Our World in Data and matching those daily numbers against the deaths recorded in the press releases by the Department of Government Information (DGI).

They drew out all elements from these sources that allowed them to present each death as the passing of an individual person – where they were from, their age and gender, where they passed away, and what has been officially recorded as their cause of death. The team also noted down whenever people in prisons were reported to have died from Covid-19. We were informed that this required going through the DGI press releases and manually entering details into the database, because the DGI releases are stored on their website as jpeg-formatted scans of the actual releases.

However, the publicly available data is quite limited and covers less than 6% of the total number of people who have died from Covid-19 in Sri Lanka. So as a next step, they want to try and access data that the Government has not released yet and also depend on other sources like news reports about deaths of health workers so that the public can keep adding to the memorial. They added: “We also want to invite submissions from people who have lost loved ones and want to add them to the memorial and we’ve created an option on the website for them to connect with us while we figure out that process.”

Another factor they noted as a challenge was that they found the government press releases were presented in an inaccessible format as jpeg image files which meant in order to add that information to their database, they had to read through these images and manually enter the data. They had a great group of volunteers doing this task and as they entered data, they noticed that often there were discrepancies. “The quantitative number of deaths for a certain date would be different to the more qualitative data gathered from several press releases. For example the total number of deaths recorded for 14 March 2021 is just one but as we went through press releases, we found three more deaths that happened on the same date, bringing the total to four instead of one,” they commented.

Impact of the memorial

The way that the daily death count is reported very quickly allows the loss to be reduced to a number, which fluctuates from day to day. As numbers reduce, it can also lead many to believe that the loss is somehow “less” – some media outlets even reported a reduced number as “only” a certain amount of deaths. For those who are left behind, these are beloved family members, and each loss is felt very deeply. They hope this memorial serves to remind people that this loss is more than the statistics.

We asked the pair if they think this memorial will help bring a feeling of closure for the loved ones of the departed, to which they responded that they can’t speak for them or know the depth of their grief to know how they will perceive this simple website, but they would be happy if, at the very least, this attempt to ensure the deceased are remembered as individuals will resonate with the ones who mourn them.

De Sayrah and Perera hope the memorial motivates journalists – and others too – to look more closely at  the data the Government is releasing on Covid-related deaths, follow up on some of the discrepancies noted in our publicly available database, and push for more transparent, systematic, and thoughtful recording of these deaths.

‘Life is too short, go ahead and do what you have to do’: Magic Box Mixup

February 18, 2021 byNews Admin No Comments
Magic Box Mixup (MBM) needs no introduction. After their smashing success at TNL Onstage back in 2006, where they won two awards, the band has now become a household name. Over the years, MBM has made

Where politics fails, art can be a channel for change