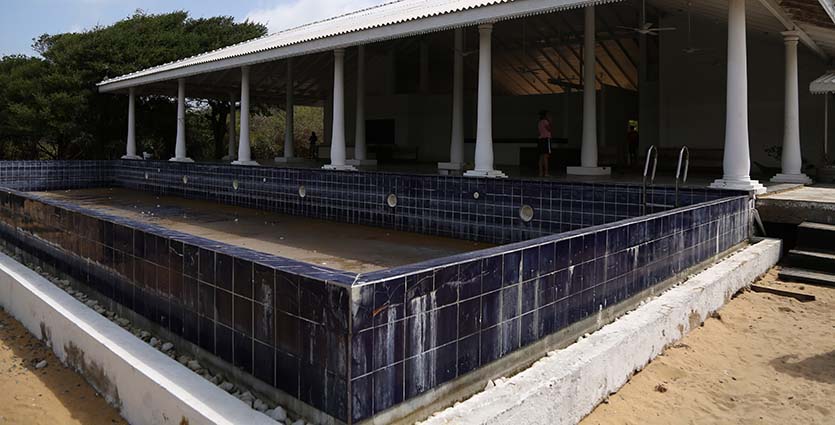 Tourism is a major source of income for Sri Lanka and following the end of the war, successive governments invested heavily to boost tourism in the country.

However, the Government has been accused of failing to protect or improve some tourism-related projects purely because they were launched by the former regime.

One such project is located in Kalpitiya. A hotel located in what was earlier identified as the largest tourism development project – the Kalpitiya Tourism Promotion Zone – was abandoned since 2017 as the owner faced financial difficulties due to the alleged lack of co-operation on the part of local financial institutions to support entrepreneurs. 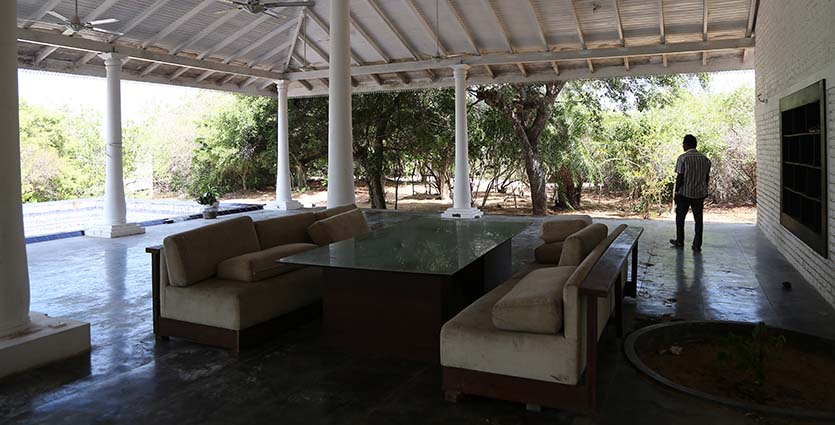 Dutch Bay Resort Owner Niel D’ Silva told The Sunday Morning that the hotel was the first of its kind to commence operations in Kalpitiya, laying its foundation stone in 2009 and had become the number one resort within the Kalpitiya Tourism Master Plan that operated in the year 2013.

“This is a project we’ve been planning to do within the Kalpitiya Master Plan by attracting yoga and meditation lovers to Sri Lanka,” he said.

However, even though D’Silva and his Middle Eastern shareholders had high hopes for the project, the 2015 Government change severely affected the operations as the current administration allegedly assumed the project was owned by former President Mahinda Rajapaksa.

“I was affected when the Government changed in 2015. They thought this was Mahinda Rajapaksa’s hotel, which is not true. I obtained a loan of Rs. 248 million to build the first phase of this hotel, and the bank which I obtained the loan from agreed to provide funding for the second and third phases as well. But with the changes in the Government, the Chairman and the General Manager of the said state bank also changed. The newly-elected officials then refused to provide the funds,” D’Silva stressed.

“I have been working for the past two years to continue the project as a spiritual vacation club. But the said state bank did not support me. I can’t obtain another loan because of the non-performing loan,” he lamented.

D’Silva, an award-winning entrepreneur, is still struggling to rebuild his lost businesses but didn’t give up hope. With the support of his shareholders, he had bought another plot of land in Nuwara Eliya, and is also planning to build two hotel schools to train local youngsters who are unable to speak or write English.

Dutch Bay Resorts Kalpitiya received the award of “Investment in People” by Enterprise Asia (www.enterpriseasia.org) at the Asia Responsible Entrepreneurship Awards 2014 (AREA 2014) South Asia, held at JW Marriot Hotel New Delhi Aerocity in 2014. The award was presented in recognition of the resort’s outstanding and exemplary achievements in social and responsible entrepreneurship.

“I have given a proposal to another state bank to launch the two projects and settle the loan in the other bank with the hope of continuing our journey to bring $ 150 million within two years. My profit model is to generate $ 150 million,” D’Silva explained.

Explaining the situation he faced over the past four years due to financial difficulties, he said: “The hotel was doing well, and it was so due to our personal investment and commitment. We’ve brought in through our personal accounts millions and millions to survive. Money has been coming into Sri Lanka since 2008, which was when I moved here.” 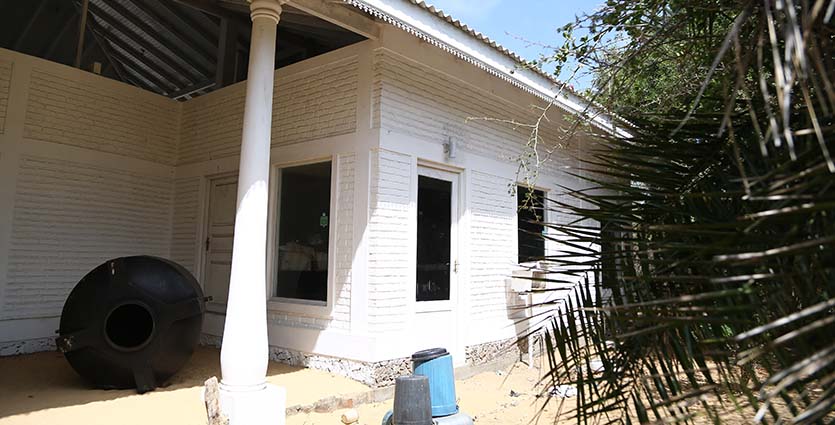 With the bitter experienced he had with the local banking sector, D’Silva said unless the mindset of the banking officials changed immediately, the country would not be able to rise from the economic crisis.

“The inability of our bankers to understand that this country’s account has to be built in collaboration with the private sector, rather than ripping off the private sector with high interest rates and taking their assets, is a big problem,” he stressed.

“I have put in several millions sourced by myself and shareholders of the project, but the bankers don’t care. They barged in and said they are going for an auction and our operations must close down – they did that in 2017. Now, I’ve been trying to restructure these lands. I’ve been getting investors to come in, but every time these investors go to the government-owned bank, they were asked: ‘Why are you going to Mr. Neil? Come to us. It’s our land’. I’ve already got approval to do a nearly $ 100 million yoga meditation centre, but my challenge is nobody else but the bankers,” he stressed.

He stressed that the Government needed to be aware of the behaviour of the personnel at government banks, adding that individuals with adequate knowledge needed to be appointed.

However, explaining the story behind the abandoned million rupee luxury resort, Sri lanka Tourism Development Authority (SLTDA) Director General Upali Ratnayake told The Sunday Morning that the said resort development project which was launched prior to 2012 was delayed due to many reasons.

As such, the development that was expected by the investors had not taken place, he said.

The Government has a responsibility to develop infrastructure, he said, adding that since the mega development project was delayed, other developments also got delayed.

According to Ratnayake, the island resort development project was a 12-island development plan, whereas D’Silva owned private land and had put up a hotel allegedly without any communication with the relevant authority – a matter separate to the development plan. However, he completed his project expecting the infrastructure of the area – particularly transportation – and promotions of the resort to be done by the Government.

“What D’Silva is saying is true. When you have a master plan, you expect development to take place. But there were two sides to this situation when the Government acquired the land. Some gentlemen filed a case against the SLTDA, and so even the investors who took the land from the SLTDA did not want to develop and risk their capital. In addition, we also told the other investors that it was not a confident environment for them to invest huge amounts of capital. Likewise, things dragged and it took almost six years for us to clear the court case,” he added.

“Then the Government changed, and the development slowed down. In the meantime, D’Silva explained to us that he was facing financial difficulties because the number of occupants was not sufficient and transportation was the main problem. Thereafter, he was looking for a partner,” the SLTDA Director General said. 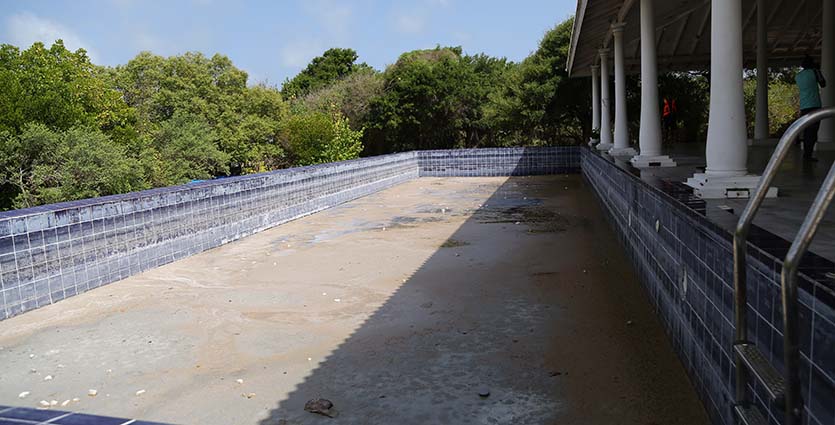 According to Ratnayake, the hotel owner held several meetings at the Prime Minister’s Office where he informed the Government that he found an investor and was going to form a partnership, which was his own initiative. The PM’s Office had also called the respective state bank to the meeting as the Government wanted to solve the problem.

“The bank should also understand that acquiring property by auctioning would not work, especially when the investor needed to be assured. Sometimes, it is the respective bank manager’s thinking and not the bank’s policy that will affect the outcome of this scenario,” Ratnayake said, adding that tourism was a lucrative sector which needs financial policy support and also some sort of financial allocation for the investments not sufficiently supported by financial policy in the Government, where the Central Bank was also partially responsible.

The Director General also noted that D’Silva’s resort should have been supported with a marketing programme. “But there again, the Government can’t market a single hotel. There must be a sufficient product,” he stressed.

“Now everything is cleared and we are going to go ahead with the development. We have overcome most of the obstacles. However, we yet have another major barrier – even though the islands were owned by SLTDA, most of the investors were coming for water bungalows,” Ratnayake said.

“Water bungalows have to be built in the water, and permission to build these can only be obtained from the President. Also, whatever requests sent to the President’s Office never come back. We are also struggling to push two more projects through,” he added.

October 20, 2019 byThe Sunday Morning No Comments
Sri Lanka has sought details from Malaysia on LTTE suspects arrested during multiple raids recently amid fears the banned terrorist outfit is attempting to reorganise and regroup.