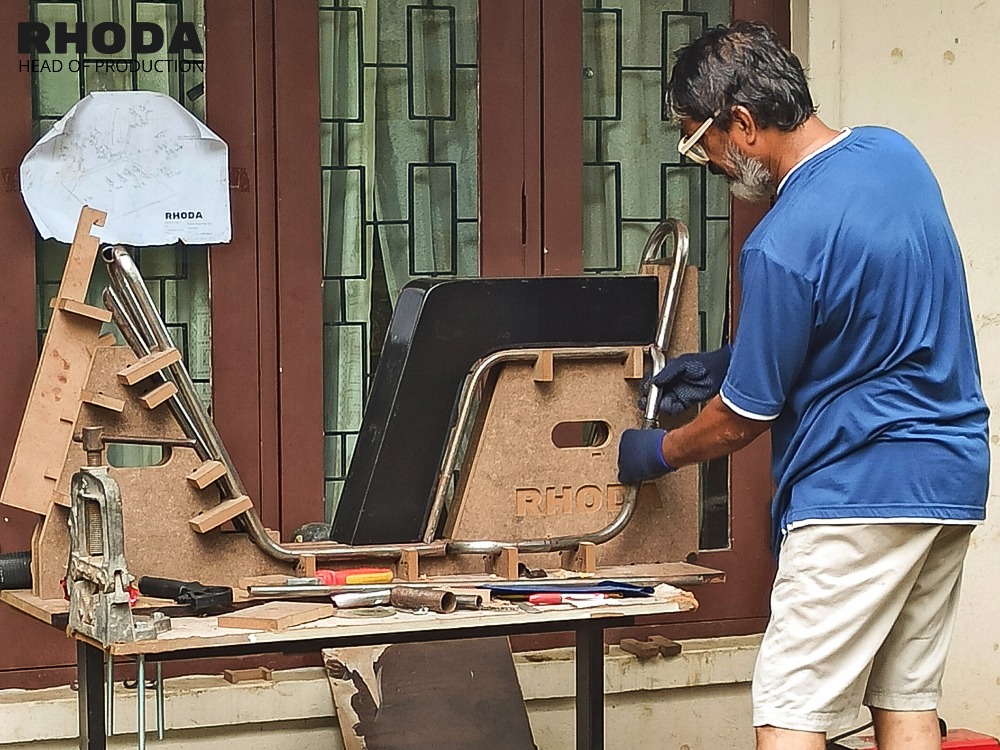 A new kind of wheel going round and round: Eyas Fazul of Rhoda

About a hundred years ago, the way we travelled was revolutionised by Henry Ford’s Model T car, the first assembly line-produced car that could be sold to the masses effectively. Fast forward to the present day, and cars are everywhere, but they do come with their own limitations; carbon emissions, affordability, and economy of use chief among them.

Alternative, and more importantly, sustainable transport is something that we need to think about more and more, and Sri Lanka has its own unique answer to this: The Rhoda smartbike. 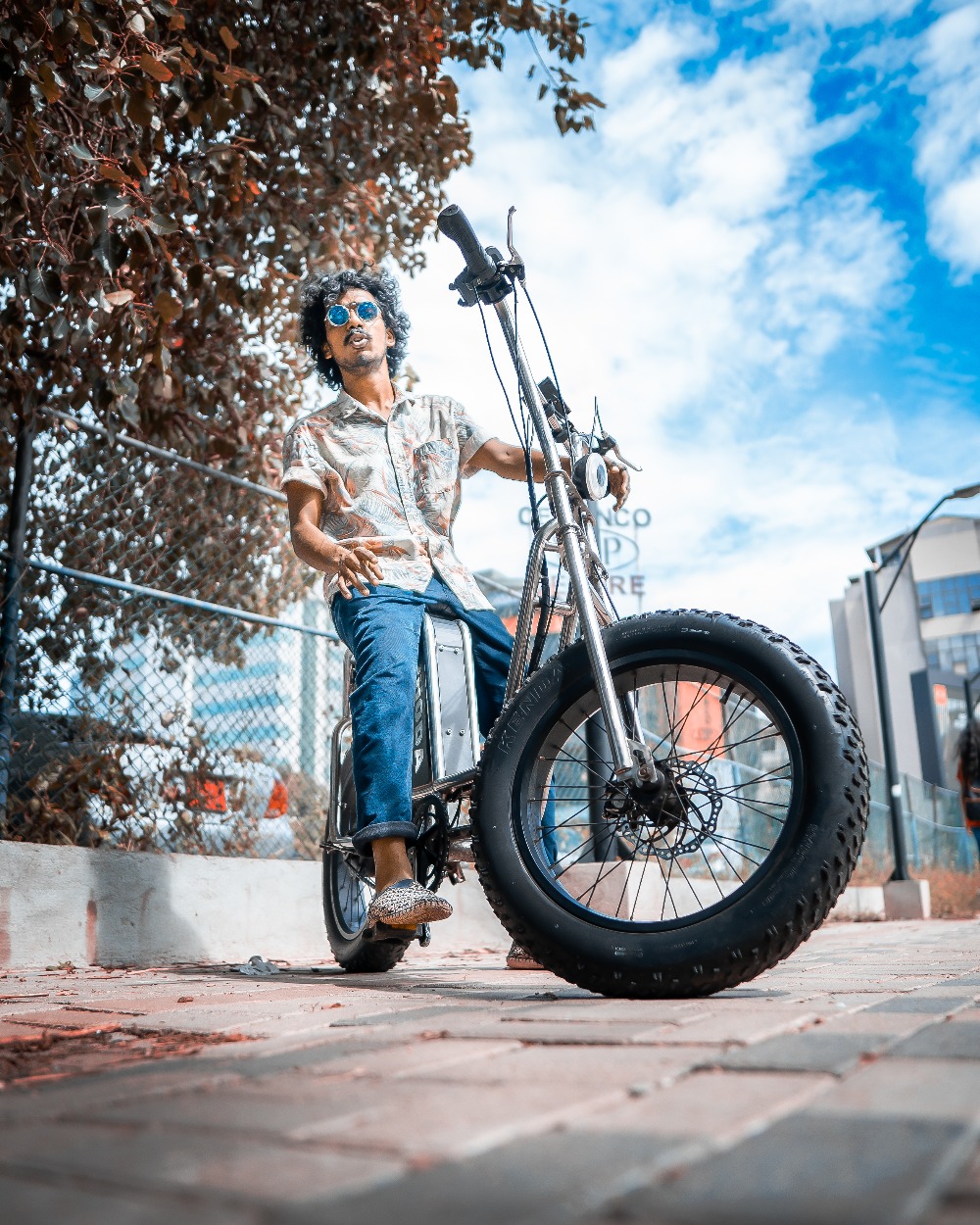 “It’s important to ride the bicycle first and give people a good experience of the Rhoda, because if they’re not happy with it, it defeats the purpose of a product like this”  Rhoda Founder and CEO Eyas Fazul

More than a traditional bicycle, the Rhoda is linked to your smartphone and uses a motor and battery to make pedalling and commuting easier in a format that is not only significantly cheaper than taxis or three-wheelers (a full charge of the Rhoda costs only Rs. 15, from which you can travel up to 60 km), but is also environmentally sustainable, with a short trip in the Rhoda causing less carbon emissions than walking to the same destination. Convenient, sustainable, and economical, the Rhoda reimagines how we see transportation and mobility in Sri Lankan cities.

Internationally too, the Rhoda is breaking ground as the only customised solution for a smartbike, where the display of the bicycle is linked to a smartphone app and the owner’s smartphone becomes a security measure, acting as the key to activation (there is a manual override for emergencies and if your phone is dead, the Rhoda also allows you to charge your phone). It does this while coming in 60% cheaper than its closest counterparts in the marketplace.

Launched in September 2020, the core team behind Rhoda is small, led by Founder and Chief Executive Officer (CEO) Eyas Fazul, who is an engineer; his father, Fazul Mowjood, an industrial professional with more than 40 years’ experience who functions as Head of Production; and his business partner, product designer Lee Bazalgette works as Rhoda’s Head of Design.

Brunch chatted with Rhoda Founder and CEO Eyas Fazul on both Rhoda’s inventive approach to crowdfunding a start-up through limited edition merch and non-fungible-tokens (NFTs) as well as how Rhoda has made its way through the pandemic.

Rhoda and the pandemic

Fazul shared that Rhoda is no stranger to the pandemic, having been founded during the first lockdown last year, and launched in September 2020 just before Sri Lanka’s second wave of Covid-19 hit in early October. “Rhoda is a true Covid baby. From the start we used to work remotely because we were in different countries,” Fazul said, adding: “Even our company registrations took place online. The Registrar of Companies allowed for everything to be sent in and our bank accounts were also opened online.”

Rhoda’s first lockdown took place right after the first countrywide lockdown last year, with Fazul sharing that he and his father built the first Rhoda bike in his garage. Covid-19 has undoubtedly had an impact on the whole process. Restrictions and regulations have caused unexpected delays. “We were actually supposed to be delivering by now, according to our original timeline,” Fazul said, adding: “But Covid-19 has made getting approvals difficult and we have not been able to import because of the new restrictions, which has caused a huge delay. We did get our approval sorted through, just before the third wave hit.”

While Rhoda works with local suppliers where possible, certain items in the Rhoda product like batteries and motors need to be imported, which is why the import restrictions hit Rhoda hard, although with the support of the Ministry of Industries, Sri Lanka Customs, and several other players, this has been resolved, with the imported parts needed now on its way. This hasn’t deterred the team behind Rhoda though, who have spent their time in lockdown(s) refining their designs, taking the Rhoda product through lots of iterations to create the most efficient bike possible.

Rhoda also has a 2,000 sq. ft. factory set up and ready to go to begin producing the first round of pre-ordered Rhoda bikes, but due to the pandemic, they’ve shut the doors temporarily in order to keep people safe, with Fazul and his father instead working privately together to create pre-production models for Rhoda to use to promote the brand. “My dad came down from Saudi two months ago,” Fazul shared, adding: “And we have been working collaboratively in our garage again, building pre-production models for us to use at our demo days. We’re both mechanical hands-on people, my dad and I, it’s in our nature, so we’ve set up a small thing here for now.”

Rhoda’s demo days are a unique way of getting the Rhoda product out there to potential customers, with the public invited to register for a test ride ahead of one of Rhoda’s demo days and then being able to see, touch, and ride the Rhoda themselves before deciding if they would like to place a pre-order, an experience, Fazul shared, that is very important because “it’s important to ride the bicycle first and give people a good experience of the Rhoda, because if they’re not happy with it, it defeats the purpose of a product like this”.

Rhoda next plans to hold demo days across Sri Lanka, choosing five key locations where they can show off the Rhoda and let as many people as possible experience it. Fazul shared that they have received over 500 registrations for test drives so far, with over 100 pre-orders having been made by people who have already been able to test out the Rhoda. “Typically, when pre-order customers make their first payment and confirm their orders, a month after that, they will start getting bicycles,” Fazul said, adding that because of the pandemic, Sri Lanka’s second wave, import restrictions, and now the third wave, this is not something they have been able to stick to as a timeline, but that producing the bikes that have been pre-ordered will take first priority once operations at Rhoda can resume. 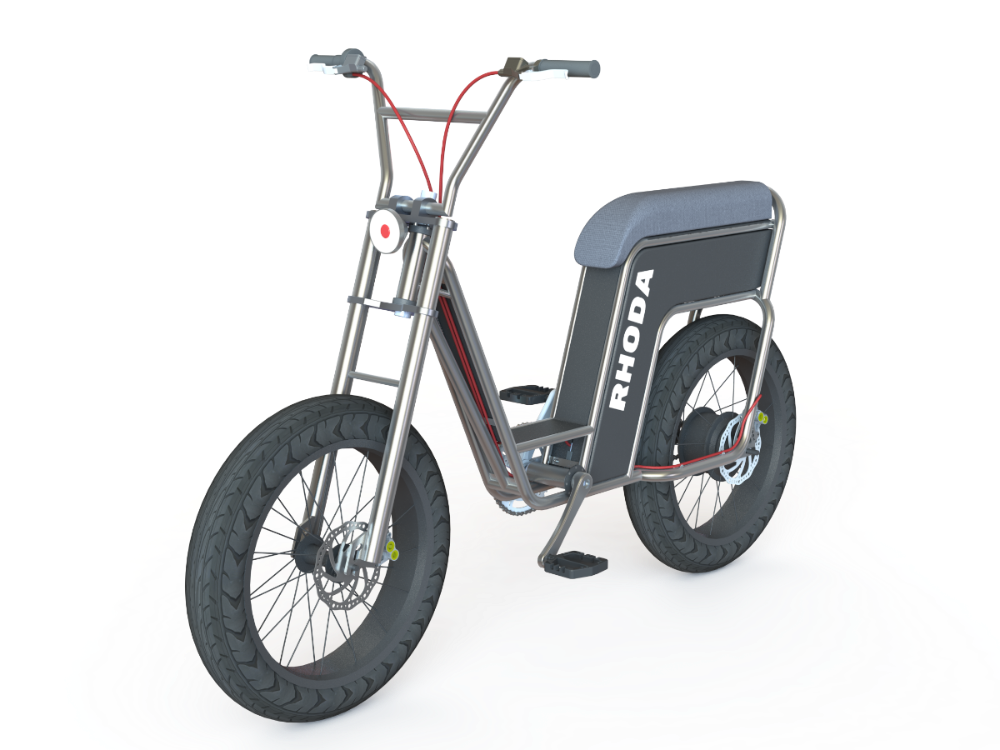 Rhoda’s latest addition to its portfolio is a line of limited edition Rhoda merchandise that has been created with the aim of giving its customers the chance to invest in Rhoda in a small way. This range of merchandise includes a range of t-shirts, masks, and wallets in a bid to crowdsource funding for its next stage of operations. In addition to the merch itself, the first 100 buyers will also receive a tradeable NFT token that will give them lifetime membership to Rhoda’s Royalty Programme. Perks of the Royalty Programme include lifetime discounts on Rhoda products and services and VIP privileges at Rhoda events.

Speaking on crowdsourcing through their NFT merchandise, Fazul shared that Rhoda was intentionally kept a private business with just him, his father, and Rhoda Head of Design Lee Bazalgette involved. As someone with experience in start-ups, Fazul felt that it was important for Rhoda to start this way because going with simply an idea to an investor doesn’t always work, and it can often end up undermining the end value of the product. While there has been interest from potential investors, the Rhoda team has decided not to take on investors until their end product and demography is strong.

However, running a business costs money, and the delays caused by the pandemic have done nothing to help expenses. “The NFT merchandise is a way of getting more revenue at this stage,” Fazul said, adding: “People can support us through this merchandise and help us get through this time till we get to the point of being able to take on pre-orders.” Going above and beyond to make items of value, Fazul shared that the Rhoda t-shirts are made of upcycled cotton, and the leather used in the Rhoda masks and wallets is ethically sourced genuine leather.

Providing added incentive and value to its customer is what drove Rhoda’s Royalty Programme, which is managed through NFTs – these are essentially digital tokens that can be used as proof of being part of Rhoda’s Royalty Programme. NFTs have many applications across the digital world, but Rhoda decided to use NFTs for their Royalty Programme as opposed to any other kind of token-based system, because these NFTs are tradeable and can be traced at any time through the blockchain (a digital ledger), including if and when it changes hands.

Members of Rhoda’s Royalty Programme receive a lifetime discount of 15% off Rhoda’s services, merchandise, and accessories as well as VIP privileges at Rhoda events. The tradability of this token means that it can be easily traded between customers without Rhoda’s involvement, giving customers flexibility and freedom with their investment. As Rhoda continues to grow and expand, these NFTs to Rhoda’s Royalty Programme are expected to grow exponentially in value because of the exclusive privileges they offer.

The Rhoda of the future

“Where we see ourselves is basically people wanting to be a part of this community,” Fazul shared, adding: “This is a way not to just help us crowdsource funds, but make Rhoda a Sri Lankan community-driven project of people who are very eager to promote electric sustainable mobility in Sri Lanka. The merchandise gives them something they can show from being part of that community, something they can wear and physically showcase to other people.”

Fazul also said the response to the merchandise has been positive, with people buying and being excited to join in supporting Rhoda, with the mindset of helping and joining a sustainable movement. “Part of Rhoda’s appeal is that it is a bike you can just hop on and go,” Fazul said, adding: “You don’t need a licence or registration and you can make small trips very quickly. People are not happy with how they’re currently travelling. Rhoda is trying to provide a solution to the mobility angle, and once we have that angle sorted, there’s so much economic development that this would create in turn. Transactions are what makes a good, and Rhoda is a way for small mom-and-pop businesses who don’t see a lot of foot traffic to have more people visit conveniently and make purchases, that in turn drive the economy. That is our vision for Rhoda.”

August 16, 2021 byNews Admin No Comments
Social media has become an integral part of our professional and social lives. Even before the pandemic, the internet and social media were redefining how we lived our lives. Covid-19 has just strengt

A possible light at the end of a long tunnel

January 4, 2022 byNews Admin No Comments
2021 is now officially in the past as we embark on our first week of back-to-work drama and getting back to normal after the holiday season. 2021 was an interesting year, to say the least, especially