A series remembered for Jayawickrama heroics

After a dominating performance by the spinners, Sri Lanka won their first series of 2021 with 209 run victory against Bangladesh in the second Test. 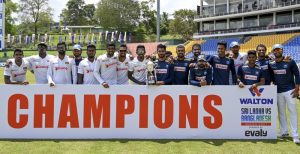 The victorious Sri Lanka team with the series trophy yesterday (3)

Sri Lanka, yesterday (3) against Bangladesh in Pallekele, recorded their first Test series win after January 2020 which they recorded in Harare. Since last December, when Sri Lanka began international cricket after the outbreak of the pandemic, they played three series; one against South Africa (away and lost), England (at home and lost), and the West Indies (away and drawn).

* He also became the first bowler to take a 10-wicket haul on debut since 2008 when Australia’s Jason Krejza made the feat last.

* He is also the first bowler since Narendra Hirwani in 1988 to pick up two five-wicket hauls in his debut match. 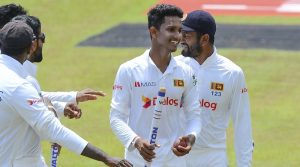 The Sri Lanka vs. Bangladesh series will be remembered for a long time due to the historic effort by the 22-year-old left-arm spinner from Kaluatara, Praveen Jayawickrama

The day began with Bangladesh resuming on 177/5, with Liton Das and Mehidy Hasan in the middle. Bangladesh’s hopes of a chase suffered an early blow when Jayawickrama trapped Liton lbw in his second over of the day.

With 254 runs required to win, Mehidy Hasan continued his efforts to chase down the target but didn’t receive adequate support from the other end.

Ramesh Mendis, who had to live under the shadow of Jayawickrama in both innings of the Test, bowled exceptionally well for a one who played only in his second Test. He added to Bangladesh’s woes when he claimed the wicket of Taskin Ahmed.

Jayawickrama dealt the final blows, bagging the wickets of Mehidy Hasan and Abu Jayed in the same over, pushing his wicket tally to 11.

Sri Lanka won the series 1-0. The first match was a high-scoring draw.

Shoriful Islam not out 0

Player of the Match: PraveenJayawickrama

Player of the Series: Dimuth Karunaratne

August 29, 2018 byMalik No Comments
Conditions at the US Open were labelled "dangerous" as five men had to retire from their first-round matches on Tuesday because of heat-related issues.