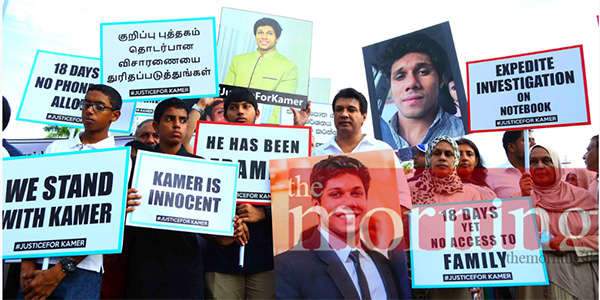 September 19, 2018 by Jennifer Anandanayagam No Comments

Kamer Nizamdeen, a 25-year-old Sri Lankan PhD student of the University of New South Wales was arrested on 30 August for owning a document which was allegedly connected with the preparation for, the engagement of a person in, or assistance of a terrorist act.

Whilst having to deny that the handwriting in the notebook belonged to him, his friends and family organised a Silent Gathering in support of Kamer in appealing for an expeditious, full and fair hearing.

The gathering amassed at the Independence Square yesterday (18 September).

Kamer’s maternal uncle Dr. Kaleel Cassim made the following statement to the media.

“We have utmost confidence in the judicial process of Australia. Kamer has been framed and we have faith that Kamer will be proved innocent. At the moment, the matter is in the hands of the investigators and we urge the investigators to apprehend the person who actually wrote the statements as the actual culprit is at large and is a danger to life and property in Australia. We, as his family, are very alarmed in the manner in which Kamer’s arrest took place hastily, based on flimsy evidence which was a notebook.

It has been eighteen long days since this arrest. Family members have still been denied access to him and Kamer has not been able to access telephone calls which he is legally entitled to do and we are deeply concerned. This lack of communication between Kamer, and his parents and close family is causing mental agony, stress and hardship for the family. It is tearing our family apart.”

Everyone who had gathered at the premises that evening retained the unanimous hope of procuring an expedient and fair hearing despite the evidential travesty.

“I’m not a relative, I’m not a friend, but I came to support him because I think there should be justice, and a proper investigation has to take place to prove his innocence, or his guilt,” said Zarina who had come in support of this worthy cause.

One supporter told us that this matter indirectly impacts the country and hence the higher authorities are requested to consider the fact that Sri Lankans at large are impacted by this travesty and that we should stand together in solidarity to request and appeal to the Australian authorities to release Kamer, if not found guilty.

Will justice be served to Kamer? We remain hopeful.

Us On Earth: From farm to table

May 1, 2019 bythemorninglk No Comments
A couple behind “Us On Earth”, a flourishing farm that feeds beyond the founding family and friends, is focused on growing their own food without using toxic fertilisers and focusing on eating healthy

What’s in a name – How did Sri Lanka’s roads and cities get their names?

December 2, 2019 bythemorninglk No Comments
Do you know the origins of Sri Lanka's street and city names? 94 year old Frederick Medis does, and he took us on a journey when we met up with him; quite the interesting one.