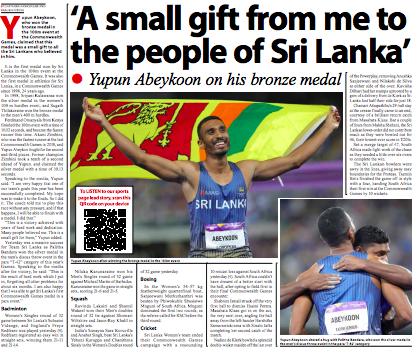 ‘A small gift from me to the people of Sri Lanka’

By Chathura Ranasinghe and Ranjika Perera

Yupun Abeykoon, who won the bronze medal in the 100m event at the Commonwealth Games, claimed that this medal was a small gift to all the Sri Lankans who believed in him.

Ferdinand Omanyala from Kenya finished the 100m event with a time of 10.02 seconds, and became the fastest runner this time. Akani Zimbini, who was the fastest runner at the last Commonwealth Games in 2018, and Yupun Abeykon fought for the second and third places. Former champion Zimbini took a tenth of a second ahead of Yupun. and claimed the silver medal with a time of 10.13 seconds.

Speaking to the media, Yupun said: “I am very happy that one of our team’s goals this year has been successfully completed. My hope was to make it to the finals. So I did it. The coach told me to play this race without any pressure, and if that happens, I will be able to finish with a medal. I did that.”

“This is a victory achieved with years of hard work and dedication. Many people believed me. This is a small gift for them,” Yupun added.

Yesterday was a massive success for Team Sri Lanka as Palitha Bandara won the silver medal in the men’s discus throw event in the para “T-42” category of this year’s Games. Speaking to the media after the victory, he said: “This is the result of hard work which I put in, forgetting all other problems for about six months. I am also happy that I was able to get Sri Lanka’s first Commonwealth Games medal in a para event.”

Women’s Singles round of 32 game between Sri Lanka’s Suhasini Vidange, and England’s Freya Redfearn was played yesterday (4). Redfearn registered an easy win in straight sets, winning them 21-11 and 21-14.

Ravindu Laksiri and Shamil Wakeel won their Men’s doubles round of 32 tie against Shomari Wiltshire and Jason-Ray Khalil in straight sets.

In the Women’s 54-57 kg featherweight quarterfinal bout, Sanjeewani Muthuthanthri was beaten by Phiwokuhle Sbusisiwe Mnguni of South Africa. Mnguni dominated the first two rounds, as the referee called for RSC before the third round.

Shabnim Ismail struck off the very first ball to dismiss Hasini Perera. Masabata Klaas got in on the act, the very next over, angling the ball away from the left-hander Harshitha Samarawickrama with Sinalo Jafta completing her second catch of the match.

Nadine de Klerk bowled a splendid double-wicket maiden off the last over of the Powerplay, removing Anushka Sanjeewani and Nilakshi de Silva at either side of the over. Kavisha Dilhari had her stumps uprooted by a gem of a delivery from de Klerk as Sri Lanka lost half their side for just 18.

Chamari Athapaththu’s 29-ball stay at the crease finally came to an end, courtesy of a brilliant return catch from Masabata Klaas. Bar a couple of fours from Malsha Shehani, the Sri Lankan lower-order did not contribute much as they were bowled out for 46, their lowest-ever score in T20Is.

Set a merge target of 47, South Africa made light work of the chase as they needed a little over six overs to complete the win.

The Sri Lankan bowlers were awry in the lines, giving away easy boundaries for the Proteas. Tazmin Brits finished the game off in style with a four, handing South Africa their first win at the Commonwealth Games by 10 wickets.

You are not men, Ramiz Raja tells New Zealanders

‘A small gift from me to the people of Sri Lanka’

August 4, 2022 by Ruwani Fonseka No Comments