October 17, 2021 by Jennifer Anandanayagam No Comments

When you’re a content creator in the digital age, along with the opportunities that come your way to learn, create, and grow in your chosen passion, comes also the often unpleasant experience of dealing with online ridicule. For 28-year-old YouTuber Lucie Borne, originally from England but currently residing in the south of Sri Lanka (near the city of Galle), this online ridicule was of a more unique nature. The target of the criticism was her choice of romantic partner. 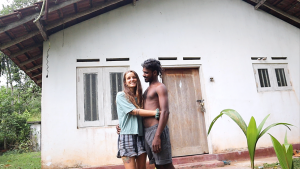 The very first video from Lucie’s channel “Where’s Lucie?” that I watched was titled “Welcome To Our Sri Lankan Home”, where Lucie and her partner Lahiru take you on a tour of their new home. Even though the place, at the time, required quite a bit of renovation to become liveable, it was hard to miss the unbridled excitement in the pair as they welcomed viewers to join the next chapter in their adventure together.

“We really lucked out with our home,” shared Lucie, speaking to Brunch. “It may not look like it from the videos, but we are really happy with it, despite its flaws. It is an old house with a huge piece of land that is covered in cinnamon. We have some big plans for the future, and hope to soon create a comfortable home.”

Lahiru, being Sri Lankan, dark-skinned, and also of a different background than Lucie, was the target of cruel comments which at first, according to Lucie, affected him. “It is in human nature to judge, and to judge without really knowing,” she shared.

“Personally, I am focused on my own life and not on how other people are living or what they are doing. Everyone is different, and I hope that that can be more recognised in Sri Lanka soon,” she continued. 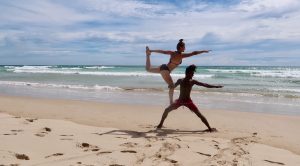 Her YouTube channel “Where is Lucie?” was born in May 2018 from her desire to show people the “truth” about a place – the hardships people and animals face. In addition to content creation, Lucie is also a devoted animal welfare advocate. She works at Animal SOS Sri Lanka, an animal sanctuary in the South that houses and works with around 2,000 dogs, most of whom are sick, disabled, and vulnerable. Lucie’s love for man’s best friend is transparent in her videos, as she and Lahiru spend time with and care for the rescues at the shelter and their own happy brood of doggos, taking them on frequent enjoyable trips to the beach.

“Many (of these dogs) were victims of road traffic accidents, and came to us disabled or in a critical condition,” shared Lucie. Having seen some horrific cases first-hand, and working with them on their road to recovery, Lucie finds it incredibly inspiring to be a part of it all. “The fight that they have to pull through. They truly are a miracle and an inspiration.”

Lucie also wanted to inspire others to travel more ethically and lead a more sustainable lifestyle through her channel, and this is evident in her videos as well, where she shares her own experience of home gardening, repurposing of furniture and other household items, and a minimum-waste lifestyle.

As a kid growing up in the countryside, outside a town in the southwest of England, Lucie enjoyed playing outdoors; she also dreamed of travelling. “The thing I excelled most in was dance,” she said, adding that she had a huge passion for contemporary dance. “I loved to choreograph and tell a story through the art form.” 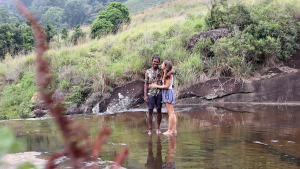 Although she started studying dance at a private dance school, she soon dropped out because the experience was mentally challenging for her. “The dance industry is a tough one.” Eventually, she worked full-time in a bar and restaurant, using her free time to research destinations. “I was so driven to save up as much money as I could so I could start exploring the world. When I’d come back from travelling, I would go back into the hospitality industry to save up more funds to travel again.”

Her visit to Sri Lanka took place in March 2020, just before the Covid-19 pandemic really hit the country. After having gone through a major turning point in her life and needing an escape, Lucie made the decision to travel to Sri Lanka. “Sri Lanka has always been at the top of my bucket list, so I thought ‘why not’ and booked a flight there and then.” Although she intended to only stay here for a month, things worked out differently. Just a few weeks into her stay on the island, Lucie decided to call Sri Lanka her home.

“I was helping out at the animal sanctuary. I loved it there so much and could see myself being more involved with the rescue, care, and rehabilitation of the animals.” While the UK Government advised British citizens to return home because of the pandemic, Lucie decided otherwise.

It was at Animal SOS that Lucie first met Lahiru. “He was working with the disabled dogs, and he just caught my eye.” Lahiru not being able to speak any English and Lucie not knowing any Sinhalese didn’t stop the two of them from spending time with each other. “I heard through translations that he liked me, and I obviously thought he was really attractive and we just started meeting up outside of the sanctuary, at the beach, playing cards and learning, little by little, each other’s language with the help of Google Translate.” Lahiru, according to Lucie, was very shy and also going through a tough time in his own life. 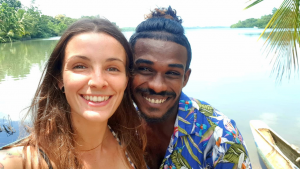 Beach boys in Sri Lanka have their own unsavoury reputation. Known most times for harassing tourists and swindling money from them, it was not long before similar sentiments were attributed to Lucie’s own romantic partner.

“People are very familiar with what goes on with that (beach boys) and applied it to Lahiru and my situation. I was never aware of that kind of thing happening, and even to this day, I’ve never heard of any stories locally. The only information I have seen is an article involving a foreign lady and a younger Sri Lankan guy, which I believe is a popular story worldwide, but other than that, I’ve not heard of anything else.” Lucie thinks that there are genuine, kind “beach boys” out there. “If they are to be categorised as ‘beach boys’ for their looks or work location, then it’s a shame that people’s opinion is negative about them because of others’ actions.”

Having experienced a fair share of negativity, both online and in their personal lives, Lucie thinks that a lot of this stems from jealousy. “At the start, it really affected Lahiru. People were so quick to judge, when having only seen him for 10 seconds in a video. We now just either ignore the petty comments because it’s not worth the energy to respond, or we just laugh it off or make it a joke.”

I asked Lucie what she thought were some common misconceptions out there about the nature of their relationship, to which she said that now, the majority of their viewers accept them. “We’ve been in a relationship for a while now, so it’s become ‘normal’ to people. In the beginning, I think people thought that it wouldn’t last between Lahiru and me because we are from completely different walks of life, with regard to ‘class’, education, culture, and family.”

Talking about some of the discrimination that arose because of Lahiru’s skin colour, she said that there was the odd comment here or there like ‘“who is that guy, is he your servant?” or “monkey found his banana” or “love is blind, black”, etc. “We try to ignore these comments and push past them, but after connecting with other interracial couples and hearing their stories (many people wrote to us after we released our ‘Sri Lankan Love Story’ video), it seemed very common for people in an interracial relationship to receive negative and hateful comments.” 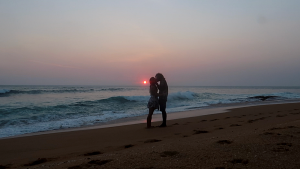 Describing her relationship with Lahiru as pure, fun, and strong, Lucie said that it is “just so natural and true” between them. “We are constantly laughing together. Individually we are strong, but together we are the strongest and unbreakable.”

A YouTuber in a foreign land during a pandemic

“It’s not easy!” confirmed Lucie, adding that working full-time at the sanctuary also added to the challenge. “In previous lockdowns, I have really struggled to find inspiration on what to film, but since buying our house, the possibilities are endless. The pandemic has obviously hit the tourism sector pretty hard, and the backpacker scene is nonexistent, and of course, travel restrictions have made it a lot more difficult to travel around. I’ve not been too affected by it, however, as I’ve been working so much and not had much time to explore different parts of the country.”

Continuing with their house renovations to create a living space that is homely and can be a base for them as a couple is something they see in their future. They also hope to travel Sri Lanka, exploring lesser known places and local destinations showing the “true, unique Sri Lanka”.

“After that, it would be wonderful to travel overseas! Lahiru has never been on a plane, so it would be amazing to travel some of the world together,” enthused Lucie. Not being able to see her parents has been hard on Lucie and she hopes they can come and visit them now that the country is open for foreign travel.

“Love to me is full-on. Love is power – it’s a deep energy that is continuous. Without love, there would be no life. Love is happiness. Love is everything,” shared Lucie. About Lahiru, she loves so many things; she said it’s hard to pick just one thing. “I love his heart. He has so much passion and love to give, especially for the animals.”

Just like any relationship, Lucie and Lahiru face their own share of challenges, the difference in each other’s cultures being one. “The way of life is so different in England, and vice versa. Something that would be completely normal in the UK could be not accepted, or is frowned upon, in Sri Lanka. For Lahiru and I, the challenge we face in our relationship would be my past. I have been in a previous relationship, and for many of the local people, that’s not really heard of.”

Does she see herself leaving the island one day? To travel, yes. “But I hope to keep Sri Lanka as my home base. I love it here, and can see my future being here.”

So much! The weather, the fruits, the beautiful ocean and beaches! The wildlife, the food, the simplistic way of life.

Crime (Sri Lankans love to fight!). You wouldn’t see this as a tourist but I know about it being with a local.

From art to screen

February 5, 2021 byNews Admin No Comments
Concept art plays a major role in the overall look of a film’s world and the characters that inhabit it. Not unlike the process of storyboarding, concept design also happens during the preproduction..