A tale of five friends

October 22, 2021 by Venessa Anthony No Comments 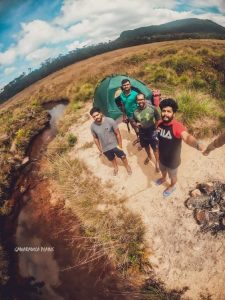 Five friends who bonded over their mutual love for travel during their Advanced Levels (A/L) have now visited almost the entirety of Sri Lanka. During their last few school years, Isuru Sanchila, Rajitha Udara, Ishantha Madawa, Ishan Sandaruwan, and Sandun Tharaka had the shared desire to explore forests and jungles. In conversation with Isuru Sanchila, he explained that back then, they didn’t pick trails that were too difficult, rather smaller hiking paths that weren’t too far away. It was after their schooling years that they wanted to see larger forests and ranges like Knuckles.

We asked Isuru what the dynamic between the five friends is like, and if they ever have disagreements when on their adventures: “We just get along. We’re all pretty laid-back and it doesn’t take too much to entertain us or make us happy.” He also noted that in his opinion, having a good sense of humour about things is super important when travelling with someone else. Let’s face it, things get weird and frustrating when travelling and you have to have a sense of humour and lots of patience to pull off a long-term trip.

Usually, when travelling, one feels happy and excited, but right now, with the pandemic, it brings about feelings of stress as well. Isuru told us that they haven’t been able to travel since last year because of the unpredictability of the pandemic. 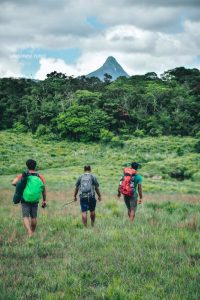 We asked Isuru where they generally stay when they travel, to which he told us that since they have a liking towards nature, they generally find spots to camp at. Before they go somewhere, they first look for whether the area has a camping site. He explained that it is not so difficult to find such a site; a quick search on google will show you all the available areas near the place. Isuru also added that having someone to share incredible travel moments with is awesome, and having someone to laugh at all the weird things that happen on the road is pretty great too.

Since they make sure to do their research before they travel, they have not faced many challenges while travelling. “We pick easy paths and don’t stray away from the roads. Occasionally, we will get a little lost in the night, but it has never been a cause for concern,” he said. However, one of the very few challenges the five face is the pollution left over by others: “Many of today’s campsites are polluted and now require permission to enter because of the irresponsibility of citizens. He urged anyone who goes travelling to clean up whenever they come across garbage littering the area, and to make sure they leave no trace of trash behind when they leave. 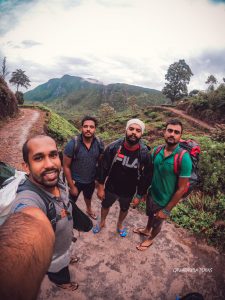 From all the places they’ve travelled, Isuru told us that his two favourites was a camping site at Sripada, and another area close to sriprada called Gouravilla thena. Right after inter-provincial restrictions are lifted, the five of them plan to visit two more places before the end of this year: “We do have to find a day that is convenient for all five of us, since we’re all working and will have to take leave from work.”

After being cooped up for so long, you probably can’t wait to feed that travel bug. But as you make plans to hit the sky or the road, you’ll want to factor in how the spread of Covid-19 could affect your itinerary, especially now that the Delta variant is surging across the country. Isuru noted that traveling during a pandemic requires a more detailed and cautious approach than before, but it can be done while minimising risks to you.

He explained that they want to visit two waterfalls in the vicinity of Knuckles that aren’t very well known, but those who do know of them are aware that it is one of Sri Lanka’s hidden gems. They also want to visit a waterfall in the Galle District. All of them hope that the situation will go back to normal again so they can embark on their adventures once more.

January 3, 2021 byNethmi Liyanapathirana No Comments
For an island paradise, discussions on the seas and marine habitats in Sri Lanka are surprisingly few and far between. Yes, we’re renowned for our whale-watching, and Sri Lankan blue whales..

The Snowball Effect to premiere in Dodanduwa

November 30, 2018 byJennifer Anandanayagam No Comments
The Snowball Effect is a remarkable international production that brings together theatre, music and visual art to explore the making of communities and borders. Produced by UZ Arts and funded by Crea