A time to dial back, a time to rethink

April 6, 2020 by Jithendri Gomes No Comments

How are we consuming? What can change?

As the country has come to a halt with almost no activity, except for the sale of essential items, there has been a significant impact on the environment around us. People are learning to survive on essentials with access to limited resources and our usual consumption levels have dropped drastically. This as a result has given us the rare opportunity to dial back and rethink about our existing lifestyles. 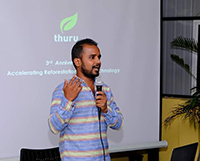 Rainforest Protectors of Sri Lanka Chief Coordinator and Spokesperson Jayantha Wijesingha, who is also an ardent environmentalist, shared his thoughts on the prevailing condition and the impact it has had on the environment thus far.

“The current situation due to Covid-19 has given us an opportunity to look at our consumption patterns,” Wijesingha said, adding that our consumption has been very excessive, unnecessary, and consumerism-driven prior to the pandemic.

“For example, in our use of fossil fuels, electricity, water, and natural resources like minerals, sand, clay, metals, and trees, we have been consuming at an exponential rate. Every year, the growth rate of consumption has been so high that our planet has not been able to bear it,” he pointed out.

A blessing to the environment

Referring to how the shutdown of Board of Investment (BOI) zones and massive industrial plants had resulted in hundreds of thousands of litres of groundwater not being consumed on the daily, Wijesingha said: “There are some factories that use up to a million litres of water every day. With their processes now coming to a halt, the environment has the opportunity to recover, even though there isn’t much rain. The groundwater table now has the ability to surcharge or recharge itself naturally.”

Wijesingha went on to explain that air pollution rates around the world have reduced significantly due to the reduction of transportation and power generation. He stated that it was reported that air pollution kills one million people in China – contrast that to the 4,000 approximate deaths reported as a result of Covid-19 alone. Air pollution is most disastrous to China as a country.

With the recent lockdown in India, the air pollution rates there too are decreasing. “This will have a positive impact on the air quality of Sri Lanka as well. There have been records of deaths in Sri Lanka as a result of air pollution,” he informed.

Water pollution is another area that has seen a significant reduction. The example he stated was that of the Kelani River Basin that has more than 100 large and medium-scale companies that release their waste into the river, either directly or indirectly, through various streams or tributaries. All these factories have completely stopped their economic and manufacturing activities, resulting in a massive reduction in the waste that is usually released into the water. Most hotels are also closed and that reduces kitchen and toilet waste being released into the water as well.

In terms of land, the biggest issue is land conversation as forests are converted to accommodate agricultural, industrial, and/or other economic developments. However, with the prevailing situation, all of these harmful activities have been paused. Soil pollution, Wijesingha explained, is usually a result of oil, chemical, and agrochemical pollution. With agricultural activities still allowed in the country, agrochemical pollution will not stop, but all other factors contributing to soil pollution have been reduced to a great degree.

“The key components of the environment are recovering. A lot of illegal activities like deforestation and mining of sand, clay, and metal have reduced. The rivers will recover of the sand that has been mined off them. Overall, the Earth will take longer to recover, but at least this will give it some additional time. If the current situation goes on for another month or two as predicted, it will give the environment some breathing space to recover,” he added on a positive note.

According to Wijesingha, what the situation has revealed to us is that we must relook at our consumption and learn lessons from it. “Our consumption methods have to be relooked at. More people are putting more effort into starting or maintaining home gardens, which is a positive result. This will also stop them from consuming harmful produce and give time to bring into perspective the high consumerist lifestyle they lead with unnecessary wants and needs that have been fulfilled over the years by overlooking the environment.”

He also spoke of the impact this situation has had on wildlife, with animals being able to freely roam in their habitats. “Elephants, leopards, deer, wild boars, etc. are all free to move around. This too teaches an environmental lesson of how much our fast-paced lifestyle is affecting the environment and animals – the negative impact of the rate of growth we were chasing after.

“Even with developed economies, it is soon proving that a more sustainable approach would have been more ideal, starting from our home gardens. Careful and conscious consumption, I believe, is the biggest lesson to be learnt here,” he shared.

He further emphasised that when the current situation ends and the environment is recovered to a certain extent, we must not lose what was gained over the last few months. “We need to ensure that we don’t go back to the normal way of life. There can’t be any environmental issue that is not linked with economic or political aspects.

“My fear is that, as evident in history, after an economic recession, most governments focus entirely on rebuilding it. This may result in the doubling of and more aggravated activity, which will in turn harm the environment significantly – even more than if life had continued as usual. Overall consumption after a recession is usually very high, and this is what a country like us who are so dependent on imports and exports need to be cautious of. Otherwise, all that was recovered will be lost.”

Newcomer on Marine Drive – The Ocean by O

February 10, 2019 bythemorninglk No Comments
The Ocean opened its doors to its newest venture - The Ocean by O, a rooftop pub.

June 29, 2021 byMihi Perera No Comments
The Military and the Criminal Investigations Department have conducted investigations with regard to the presence of camouflage-clad foreign personnel at the Chinese Joint Venture to dredge and clean