‘A Tricky Test’ begins in Galle

* First cycle’s champs: New Zealand beat India in June 2021 in the final to win the title

Sri Lanka have 0 points after 0 matches

West Indies have 12 points from one win after two matches 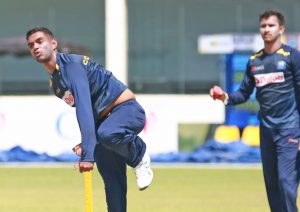 The first cricket Test between Sri Lanka and West Indies that starts in Galle today (24) will be a tricky one for both teams, mainly due to the inclement weather and heavy overcast conditions that is predicted to interfere the game.

How the prevailing weather conditions will affect the traditional “spin friendly” nature of the Galle track, particularly during the last couple of days of the match, will be an interesting prospect to watch as five overcast days are forecasted, with the last three of them being expected to be with thunderstorms.

The history of the Galle pitch indicates that batting first will be the ideal option but the present weather might nullify the ‘first-bat and bowl-second’ ploy prompting the two skippers to opt for bowling first after winning the toss.

Anyway both sides come into the two-match series — which marks the start of the two-year cycle of the World Test Championship for Sri Lanka — with minimal practice due to last week’s adverse weather which even washed off an entire four-day warm-up match in Colombo.

From the visitors’ end, they will most likely give Test debut to their 26-year-old left-handed Trinidadian top-order bat Jeremy Solozano.

July 1, 2021 byRevatha No Comments
The major sports happenings on the day

‘A tricky Test’ begins in Galle

November 20, 2021 by Ruwani Fonseka No Comments