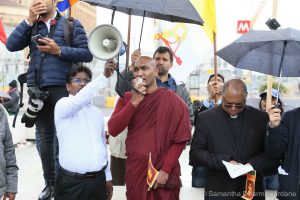 Religious services had been discontinued due to concerns regarding security within religious institutions. However, many turn to their respective religions to find solace to survive through these dark times.

Whether the decision to halt traditional practices such as observing “sil” at the temple, conducting Sunday mass at church, Hindu “poojas” at the kovil, or Friday “jumma” prayers at the mosque play into achieving the objectives of the terrorists in mongering fear within religious institutions is a question which remains unanswered.

Following the Easter Sunday attacks by a local extremist group, many religious institutions discontinued their religious prayers and proceedings.

Whilst claiming responsibility for the attacks, the extremist group also pledged allegiance to the Islamic State of Iraq and Syria (ISIS), directly adopting its interpretation of Islamic law which markets a religious utopia.

“The attacks were the result of vengeance for the mosque shooting which occurred in Christchurch, New Zealand on 15 March,” confirmed ISIS Leader Abu Bakr Al-Baghdadi through a video published on social media. His whereabouts still remain a mystery.

Quite obviously, the local extremist group focused on a specific community in the country when they directed their attacks at three of the most sacred and visited churches in the island.

The St. Anthony’s shrine located in Kochchikade is specifically a place of spiritual peace for individuals of all religions.

Following the attacks, rippling fear caused every citizen to experience paranoia, where the only possible solace they could find to move forward seemed to be in recommencing religious and cultural practices and reverting to their daily routine.

Elaborating on the issue, several eminent religious leaders stated that the way to defeat extremist ideologies was to in fact carry on with our daily routines as opposed to discontinuing cultural practices, as this action was taken as a result of increased fear.

Renowned Islamist scholar and executive committee member and Youth Affairs Secretary of the All Ceylon Jamiyyathul Ulama Sheikh Arkam Nooramith stated that discontinuing religious practices was not a solution to the current issue.

“With the advice of the tri-forces and the guarantee given by the Government, religious institutions in the country must resume their day-to-day activities. This is the only way to defeat terrorism. If we discontinue our traditions and practices as a country, we give in to what they desire,” he stated.

Nooramith also said that the country must move forward and resort to our traditions and customs, highlighting the importance of providing religious consolation for those greatly affected by the Easter Sunday attacks.

“We have started fasting for Ramadan, just like any other year. However, we will not celebrate it in a grand scale out of respect for the departed and security concerns. Nevertheless, we will continue to pray and believe in our own religion while remaining cautious of our surroundings,” he said.

In the meantime, the Mahanayaka Therosof the four Buddhist chapters; Ven. Thibbatuwave Sri Siddhartha Sumangala Thero of the Malwatta Chapter, Ven. Warakagoda Gunarathna Thero of the Asgiriya Chapter, Ven. Kotigoda Dammawasi Thero of the Amarapura Nikaya, and Ven. Napana Premasiri Thero of Ramanna Nikaya stated, in a joint statement, that This year’s Vesak celebrations were to concentrate more on spiritual development as opposed to celebration in an extravagant matter.

“Our country is in a state of chaos. Whatever security we had was taken away from us. Religion remains to guide us and is one of the few things that can provide solace through these grievous times,” he stated.

Calling attention to the importance of moving forward in order to defeat the victim, Dr. Sobhitha Thero stated that it was important that temples provide “sil” and that Buddhists celebrate Vesak at home.

“There is a plan to affix lanterns at Christian churches this year. In order to show unity in our country, we must make sure to have no religious barriers in a culture that dates back thousands of years,” he said.

In addition, Dr. Sobhitha Thero further mentioned that living and ruling by fear was not the way forward.

Speaking to The Sunday Morning in this regard, he expressed his deep disappointment in the Government for being unable to provide a feasible solution for the country’s crisis as of yet.

Rev. Babu Sharma said: “We were told to close down our kovils, not admit devotees inside the kovil premises, and were told to conduct our daily poojas without the members of our congregation,” he stated.

Highlighting further, he said: “It is the duty of the Government to ensure the security of its civilians and eradicate the fear that has been instilled in them,” Rev. Sharma said.

“Further, it should be noted that Sri Lanka is not a country divided by race and religion. Our country endured a 30-year civil war. It’s been nearly a decade since we regained peace, and we are deeply saddened by what our country had to endure,” he said.

Shedding more light on the matter, Spokesman for His Eminence, the Archbishop of Colombo Cardinal Malcolm Ranjith Rev., Fr. Edmund Thilekarathna said that the church had encouraged members to conduct prayers in their own homes.

“The Cardinal had received information from intelligence services and therefore, for the safety of the members of the parish and the citizens, he cancelled Sunday mass for the time being,” he stated.

He also mentioned that the church would hopefully able to resume conducting Sunday mass next week.

“All security measures were adopted by the parish priests to ensure the safety of the members of their congregations. All members will be searched before entering,” he said.

“However, several small churches are conducting Sunday mass with very small numbers in participation,” he added.

May 24, 2020 bySarah Hannan No Comments
The Karadiyana Waste Management Project seems to have turned into a case of a mismanaged landfill while new residents are occupying the area that was deemed risky for people to live by the authorities

March 7, 2021 byNews Admin No Comments
Concerns have been raised over the Ceylon Electricity Board's (CEB) ability to provide uninterrupted power supply to the nation in the coming months, as the country’s electricity generation is current