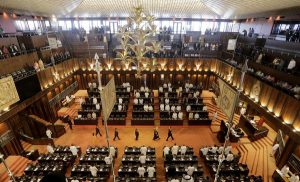 A Vote on Account allocating around Rs. 1 trillion is to be presented in Parliament tomorrow (21), The Morning learnt.

Following the convening of the Ninth Parliament yesterday (19), Trade Minister Dr. Bandula Gunawardane clarified that the Vote on Account would be presented on Friday (tomorrow).

The expenses expected to be covered by the Vote on Account are in relation to construction projects, repayment of foreign loans, and new road and power projects, it is learnt.

However, Industries Minister Wimal Weerawansa said the fully fledged budget proposal would be presented in November; the Vote on Account was to be presented to allocate funds till the Budget is prepared, he said.

Once it is presented to the House, the Vote on Account will be taken up for debate and a vote prior to implementation.

August 21, 2021 byNews Admin No Comments
The Government, led by President Gotabaya Rajapaksa and Prime Minister Mahinda Rajapaksa, spent the last week consumed by a catch-22 over deciding whether the country should plunge into another lockdo

January 15, 2022 byNews Admin No Comments
At long last, the national exams for Grade 5, GCE O/L, and GCE A/L are to be held as scheduled, which will bring much relief to students facing the exams.