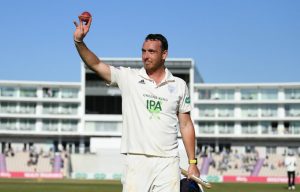 Abbott registered astonishing numbers of 17/86 across to the two innings to pick up the best match figures in first-class cricket since Jim Laker’s famous 19/90 in the 1956 Manchester Old Trafford Test.

After picking up 9/40 in the first innings, itself the 22nd best innings analysis recorded in the 21st century, Abbott ran through the Somerset batting line-up to take 8/46 in the second innings to help his side to a 136 run win. It’s the only second occurrence this century of a bowler taking 17 wickets in a match after John Davison’s haul for Canada against USA back in 2004.

To put into context the historical nature of Abbott’s performance, it is only the third time since 1950 that 17 or more wickets have been taken in a single match by a single bowler.

Speaking to the BBC about his performance, Abbott, who last represented South Africa in January 2017, admitted that he had not yet realised the enormity of his achievement. “It hasn’t quite sunk in. It is pretty incredible,” said Abbott.

Abbott’s display across the match had major ramifications for Somerset’s County Championship aspirations. Entering the match with an eight point cushion over rivals Essex, their Abbott-induced defeat leaves them 12 points behind Essex with one round of fixtures to go.

May 23, 2021 byRevatha No Comments
ODI Super League points in mid of bot teams