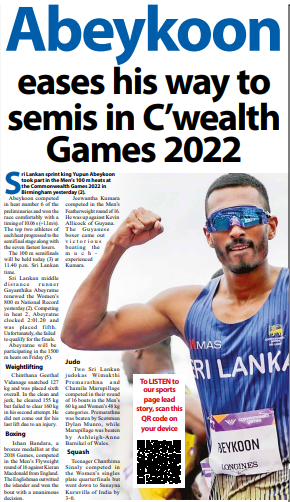 Abeykoon eases his way to semis in Commonwealth Games 2022

Abeykoon competed in heat number 6 of the preliminaries and won the race comfortably with a timing of 10.06 s (+1.1m/s). The top two athletes of each heat progressed to the semifinal stage along with the seven fastest losers.

Abeyratne will be participating in the 1500 m heats on Friday (5).

Chinthana Geethal Vidanage snatched 127 kg and was placed sixth overall. In the clean and jerk, he cleared 155 kg but failed to clear 160 kg in his second attempt. He did not come out for his last lift due to an injury.

Ishan Bandara, a bronze medallist at the 2018 Games, competed in the Men’s Flyweight round of 16 against Kieran Macdonald from England. The Englishman outwitted the islander and won the bout with a unanimous decision.

Jeewantha Kumara competed in the Men’s Featherweight round of 16. He was up against Kevin Allicock of Guyana. The Guyanese boxer came out victorious beating the much-experienced Kumara.

Teenager Chanthima Sinaly competed in the Women’s singles plate quarterfinals but went down to Sunayna Kuruvilla of India by 3-0.