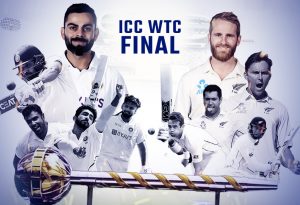 A WTC Final was a bright move, no doubt. But could its Final have been organised in a better way, at a better time, better venue? Could it have been at least a three-match series, rather than a one-off Final match?

* This is a horrible advertisement for Test cricket – Ravin Batra

* ICC  is not able to give five days completely to know the best test team in the world. What is the point in a two year WTC cycle if it is not possible to schedule proper five days for the WTC final – Manivannan

* Thank you for a wonderful (ruined) event in terms of WTC Final. An event of WTC and a venue named Southampton will be remembered inside the mind of every Cricket fan forever… (with an utter disgrace). – Rajesh Dev

* It’s pelting down in Southampton! Day four promises to be rather unpromising for cricket. Fingers crossed, that all these years of meteorological research has been futile and a farce. – Cricbuzz 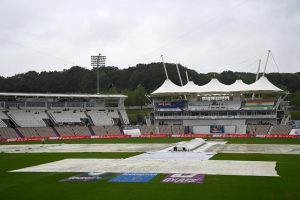 The farcical scenes in England for the World Test Championship (WTC) final between India and New Zealand sunk to new lows on Monday (21) when the entire fourth day’s play was washed out without a ball being bowled.

Sam Goodwin of Yahoo Sports wrote yesterday (22): Rain washed out a whole day’s play for the second time in the Test match, with the showpiece event now all-but destined for an anti-climatic draw.

Following is Goodwin’s full write-up which derives our attention on the manner in which the “pinnacle of Test cricket” has been organised by the game’s governing body, the International Cricket Council (ICC). A WTC Final was a bright move, no doubt. But could the  Final have been organised in a better way, at a better time, better venue? Could it have been at least a three-match series, rather than a one-off Final?

Only 141.1 overs have been bowled in the match so far as the inclement weather in Southampton continued to ruin the inaugural edition of Test cricket’s pinnacle event.

New Zealand, who will resume on 2-101 if the rain ever stops, will be particularly disappointed having taken the upper hand after their all-seam attack bowled India out for a below-par 217.

Captain Kane Williamson, batting on 12, and Ross Taylor, who is yet to score, would have expected to erase the 116-run deficit and push for a handy first-innings lead.

Little chance of a result

Rain had also washed out the entire opening day on Friday and interrupted play over the weekend, with bad light also forcing an early stumps on day three.

A reserve day is allocated to make up for lost time, however there is little chance a result will be reached even with that option.

Trophy and prize money to be shared

India and New Zealand topped the qualifying table, with Australia narrowly missing out on the final in third spot.

The trophy and prize-money will be shared in the result of a draw.

Cricket fans around the world have been left seething over the ICC’s decision to play the match in England, given its unreliable weather at this time of year.

Thousands of fans have been flooding social media with comments deriding the fact that the showpiece event has been ruined. 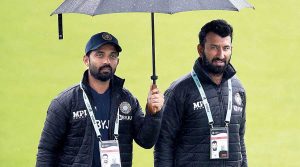 India Captain Virat Kohli had already questioned the decision by the ICC to play the final as a one-off Test match.

“If you’re talking about Test cricket and deciding who is the best team in the world on one game over a period of five days, that is not the reality of the truth,” he said on Thursday.

The importance of WTC Final

“It is not going to reflect anything for people who really understand the game and who know exactly what has gone on over the last four or five years and how the teams have fared.

“For me, this is another Test match that has to be played.”

Kohli did concede the new structure represented a step forward for Test cricket at a time when many fear for its future.

“For me it has been a very positive step in the right direction. You know that every series you are playing and competing for something,” he added.

Kyle Jamieson had starred for New Zealand on day three, taking 5-31 as the Kiwis skittled India.

This is precursor to December Test tour in Pakistan – Rumesh

September 30, 2019 byRevatha No Comments
Sri Lanka is playing their second ODI against Pakistan in Karachi today.