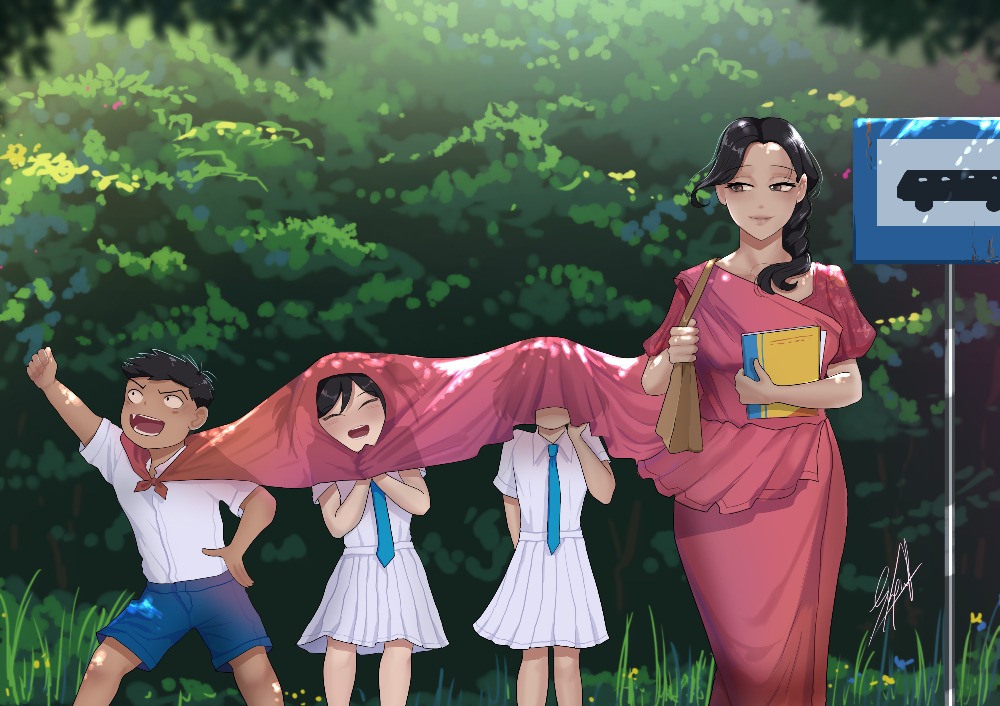 February 17, 2021 by Dimithri Wijesinghe No Comments 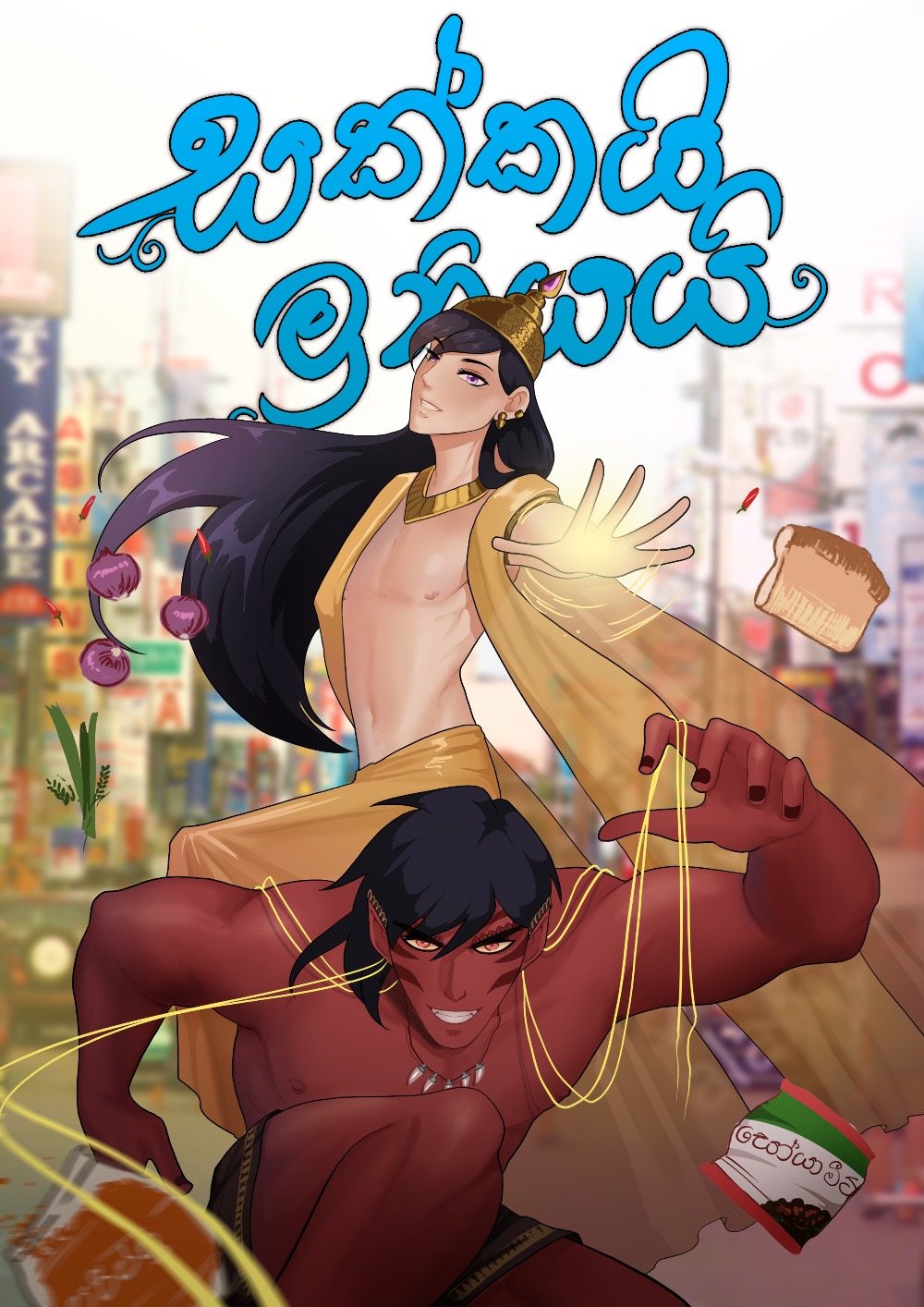 Born and raised in Sri Lanka, Achinthya Amarakoon is a Canadian resident artist creating art, satirical comic strips, and other works with Lankan influences. Since 2018, she has been creating her first long-running Sinhalese manga Sakkai Muniyai, which is awaiting its third and final season soon this year.

Professionally a UX designer and an occasional frontend developer at an aquaculture innovation company in Canada, Achinthya shared with The Morning Brunch that she is a “semi-professional artist” working on a freelance basis who still prefers to keep art as a hobby.

Settling down in Canada with her husband Rajitha, whom she says has been a big influence in her life and the one who urged her to start a proper comic and art page “without uploading them all over the internet”, Achinthya shared that her love for art has been with her since she was a toddler.

“At school, art was basically what I was known for and people loved having me in their groups during ‘artistic’ group activities,” she said, adding that her parents were always supportive and very encouraging.

Achinthya’s comics primarily feature “male x male” or “BL” storylines; typically, the stories show same-sex couples. Having coined herself as a “fujotist” (a derivative of the Japanese term Fujoshi, used to describe women who are fans of same-sex romance stories), she shared what drew her to this particular genre.

“I am interested in same-sex love stories more than your regular old love story. From an artist’s and a storyteller’s perspective, same-sex love has this somewhat tragic and dramatic element to it. It makes me feel like we take our heterosexual relationships for granted,” she said.

Being introduced to digital art at a young age, Achinthya said she enrolled at the OpenArc Computer School, expressing her gratitude to one particular instructor, Ms. Lavandi Rasara Fonseka, whom she credits as having inspired her to pursue digital art.

Accumulating the skill set necessary is but one step. About moving on from ambient artworks which most digital artists attempt to do, Achinthya shared how she stepped outside the box in getting into drawing comics. “I actually draw both. I draw a lot of fantasy portraits during my spare time and also in my freelance career,” she said.

However, personally, she feels that comics are a very effective medium to express her ideas and tell stories when she cannot find the right words. “Comics allowed me to exercise my storytelling and art skills in a single context. Besides, it’s something new – something not a lot of people do (in Sri Lanka), which in itself is a reason why I started comics.”

Achinthya explained that comic series are adapting to the digital age and they no longer follow the horizontal layout you’re familiar with in newspapers; comics are now drawn vertically to fit mobile devices. It’s easy to take a screenshot of a pivotal moment on a comic and share it around to create engagement. As a result, she said that we’re at the perfect time to embrace comics once again.

Pursuing the art of creating comics, Achinthya said that things weren’t so smooth in the beginning. Starting off by publishing stories on online platforms like Tapas.io and ComicFury, she said her work was well received but she soon realised that the series she undertook back then were a bit too ambitious for an amateur like herself, especially when she tried to release one on a more “commercial” platform and it received negative criticism. 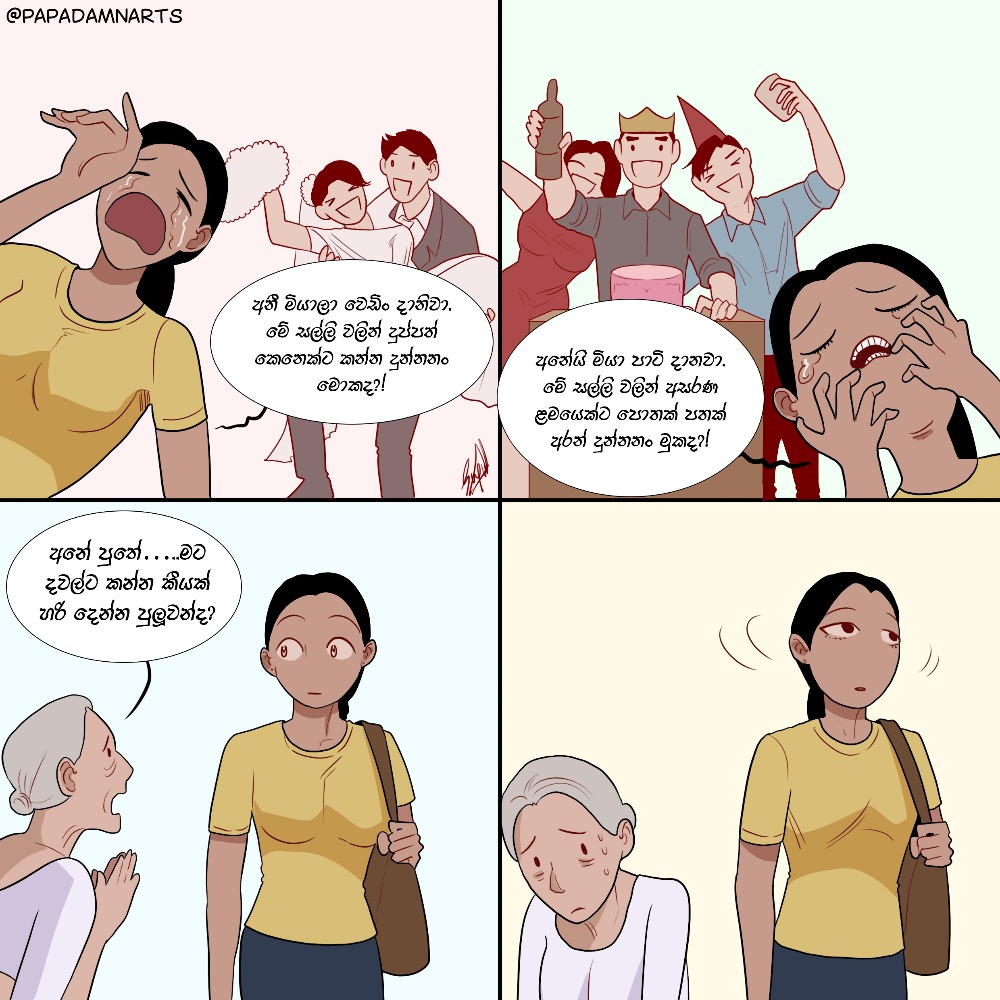 Even though she stopped drawing for the international audience for a while, she said her love for comics never died and so along came the birth of Sakkai Muniyai, a fantasy story set in modern-day Sri Lanka about a demon and a god inspired by Sri Lankan folklore.

Achinthya started posting the story on her Facebook page called “Papadamn”, where she debuted her long-running Sinhala language comic which ultimately ended up spanning two years and also became her first published comic book. “It is undoubtedly one of my greatest accomplishments thus far,” said Achinthya.

She said that Sakkai Muniyai gave her a lot more confidence and training to improve herself, and after doing two seasons of it, she decided to face her fears once more and evaluate whether her skills have improved at all, and so came along her most recent BL comic, This Fluffy Love.

Considering that Sakkai Muniyai Season 1 is now available in print, we wondered whether there is much of an audience for comics, particularly BL-themed ones, in Sri Lanka, to which Achinthya responded saying that while it is generally panned in Sri Lanka, there are BL fangirls (especially with the rise of popularity of KDramas) as well as other members of the LGBTIQ+ community who are extremely thankful to feel represented. However, as is to be expected, on the other side, there are people with homophobic opinions who have called her work “disgusting”. Nonetheless, she said that most people have warmed up to the content and have become fans.

Speaking about pursuing a rather niche subject matter, Achinthya said: “I do know that I would get more audiences if I pursued more ‘mainstream’ genres. However, passion and self-satisfaction is the core motivator for my work, and I continue to stick to genres that I feel happy drawing.”

Achinthya shared that for her, Sakkai Muniyai is more than just a comic. “The boys helped me through some of the most depressing times of my life. I collected many precious fans who were supportive of me and the stories I was telling. They also inspired other artists,” she said, adding that these tempestuous times, however, resulted in her creating another project of hers titled “Papadamn Learn”, a page where she shares tips, tricks, and techniques in drawing comics.

She said that one of the biggest challenges aspiring comic artists face in Sri Lanka is the lack of an industry, and therefore the lack of resources to pull off big, long-running projects like a comic. She hopes to use her lessons to teach them how to pull off a comic series on zero budget and with limited time.

If you’re interested in Achinthya’s work, she has some work down the pipeline you can look forward to: This Fluffy Love, a single-season story, and the third and final season of Sakkai Muniyai, the first season of which will soon be available on print, having partnered with Red Dot Geek as the publisher (visit www.reddotgeek.com or visit their store to purchase the book).

Achinthya’s work can be found online on

Blending agriculture and tech for a new future: Jeevan Gnanam on his newest venture ‘SpectrifyAI’

February 28, 2021 byNews Admin No Comments
To say agriculture is one of Sri Lanka’s lifeblood industries is an understatement. We were all famously told in school that back in the (ancient) day, Sri Lanka used to be called the “Granary of the