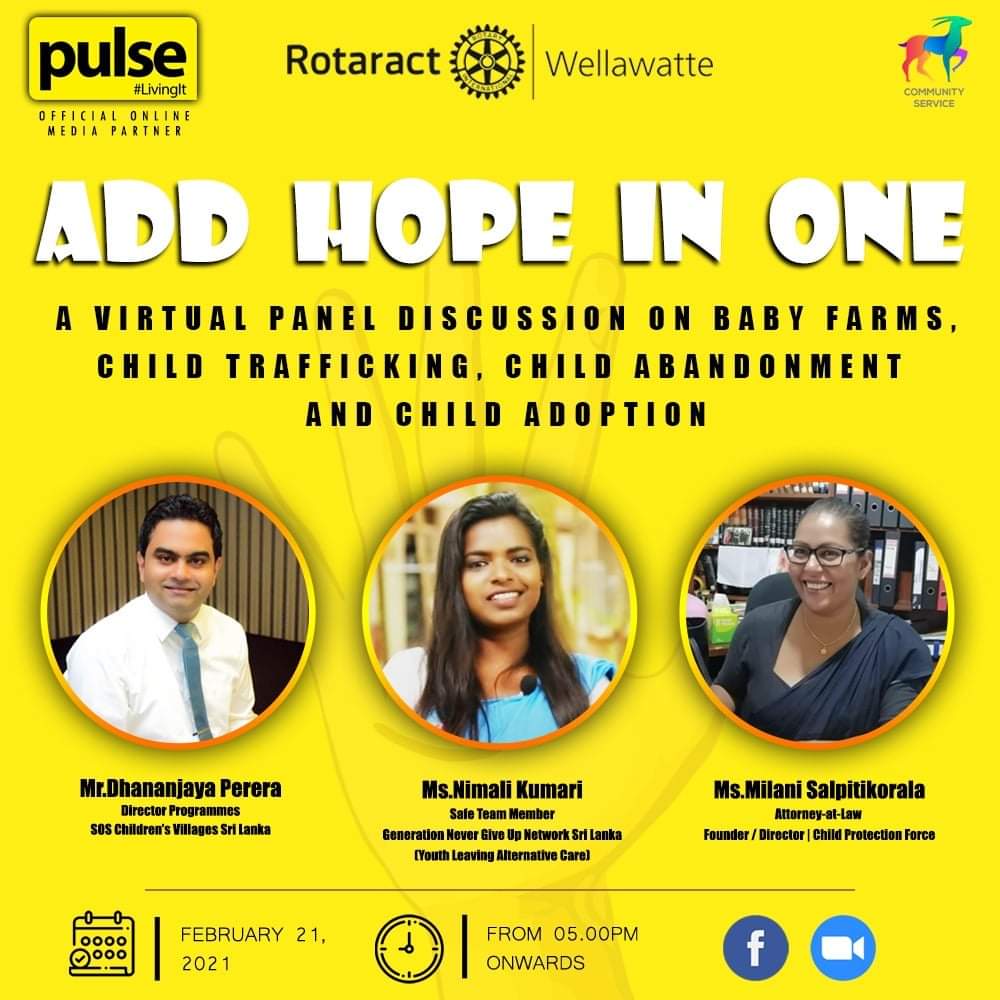 Add Hope in One: A discussion on adoption in SL

February 22, 2021 by Venessa Anthony No Comments

Add Hope In One is an initiative by the Rotaract Club of Wellawatte on the norms and regulations pertaining to child adoption in Sri Lanka. The main aim behind this initiative is to educate the general public on the child adoption process by providing a deeper understanding on the criteria of eligibility, institutions to approach to adopt a child, and the legal process involved. Moreover, in some instances, the adoptive parents face denial from society when adopting a child mainly due to their fertility status.

Speaking to Rotaract Club of Wellawatte President 2020/2021 Evelyn John, she said: “The project is also carried out with the aim of breaking the stigma related to child adoption.”

This project was initially established in November in honour of Adoption Awareness Month. As the first step, they conducted the “Smiley-face campaign” on World Adoption Awareness Day on 9 November 2020, where Rotaractors not only from the Wellawatte Club but also other Rotaract clubs, posted selfies with a smiley face drawn on their palms in order to raise awareness and get people talking about adoption.

“Rotaractors actively engaged in this campaign. It would not be wrong to say that our objective was achieved, and our newsfeed was overflowing with the ‘smiley-face’ posts,” added John.

Shelter is one of the most important needs in every human life. For many of us, this is home – a place where we receive love, protection, care, and security, provided by one/two individuals called parents. From the time a child is born, they heavily depend on their parents and family for protection, to fulfil their needs, and to obtain guidance through the many years to come. Parents are a child’s first teacher and the best teacher, as the child looks up to them as their role models in how to handle the world around them. Parents highly influence children in promoting positive growth and development.

John explained that the word “home” could hold a different meaning to some people; it could even be an institution where children are sent to for many reasons including poverty, natural disasters, neglect/abandonment, abuse, disease, or any similar issues. “All the children here want the same thing – the stability of a home. This is where adoption can play a vital role.”

The club organised a virtual panel discussion on 22 November 2020 with a set of experts to help bridge this knowledge gap, in hope that it would help bring people one step closer to adopting a child. District Rotaract Representative (DRR) for 2020/2021 Kavindra Kasun Sigera stated: “Adoption is looked at in a very negative perspective due to social stigma. As a result, there is a lot of uncertainty amongst the public as to why we should adopt a child and how they can adopt a child. There are so many unanswered questions around the subject.”

In the second stage of this project, the Rotaract Club of Wellawatte hosted a webinar with guest speakers including SOS Children’s Villages Director – Programmes Dananjaya Perera, Generation Never Give Up Sri Lanka Safe Team Member Nimali Kumari, and Attorney-at-Law and Child Protection Force Founder/Director Milani Salpitkorala, who are all well versed in areas of adoption.

The discussion covered a number of areas concerning the subject addressing the legal, emotional, and psychological aspects of adoption. They also talked through the concerns on the adoption process, eligibility criteria, and how adoption could result in a significant drop in child labour and end violence against children. Furthermore, the discussion entailed details of child abandonment and child trafficking in Sri Lanka. They detailed what one may do in a situation where we come across an abandoned child, and what actions we can take to protect them.

John noted that the commonly asked question is if unmarried people adopt a child, and whether people that already have a biological child can adopt. “The answer is always yes. It is possible if you go through the legal procedure, although the process is a little time consuming.”

The second phase of the event was held via Zoom yesterday (21). The webinar can be watched on their Facebook page: @RotaractClubOfWellawatte. They also encourage people that have more questions to drop them a message on their page, so that more children can find a place to call home.

October 1, 2021 byNews Admin No Comments
Sahan Perera, best known as Drone Sahan on Instagram, is an incredibly well-known travel photographer who has created a dynamic space to showcase his stunning photography skills online.

‘The love I’ve been feeling from Sri Lanka is phenomenal’: Nimmi Harasgama

May 31, 2021 byNews Admin No Comments
Sri Lankans making positive noise on the global stage is always something to be celebrated, and one happy global milestone is that of Sri Lankan actress Nimmi Harasgama who was just nominated under th