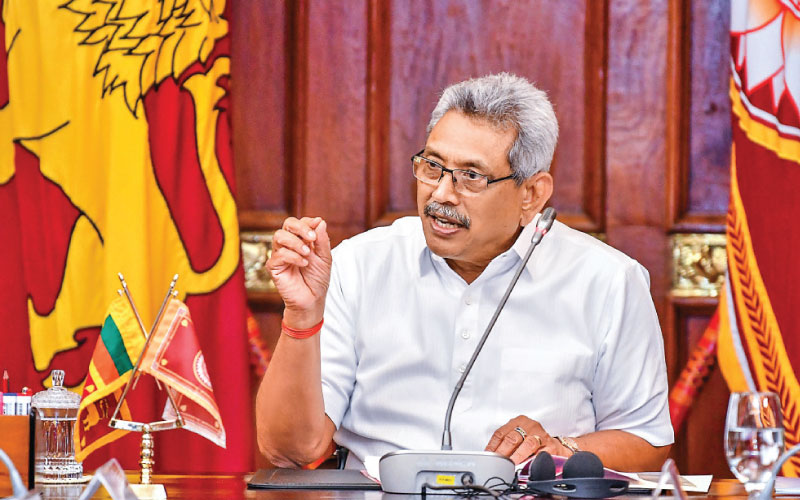 Address to the nation: President pledges to strengthen national economy

President Gotabaya Rajapaksa yesterday pledged to develop the agriculture, industrial, and service sectors to strengthen the national economy and minimise obstacles that deter the promotion of foreign direct investment (FDI).

Addressing the country at the celebrations to mark its 73rd Independence Day, President Rajapaksa acknowledged that Sri Lanka has endured religious and ethnic conflicts, racist and terrorist activities, undue external influences, constitutional crises, and many other obstacles and the challenges of establishing national security, achieving true reconciliation amongst various communities of our nation, and building a strong economy that can deliver sustainable economic development and eliminate poverty still lie ahead of us.

He added that the Government has taken action to encourage industrial and service sectors through the provision of tax incentives, and by reducing interest rates to enhance economic development.

“I have always maintained that in order to strengthen farmers economically, we must encourage them to become agricultural entrepreneurs,” he said.

It is our aim to further develop and strengthen the domestic agriculture sector so that it becomes a significant foreign exchange earner.

“We have paid attention to provide entrepreneurs engaged in small and medium enterprises, as well as those who are self-employed, with avenues in minimising delays in various approvals they require, in helping them to access financing at single-digit interest rates, and in obtaining required training,” he said.

“The policy of not selling national economic hubs to foreigners remains unchanged. I trust that the public will critically assess the misinformation and misinterpretations being propagated by those with ulterior political motives to deter foreign investors from investing in Sri Lanka,” Rajapaksha said.

The President emphasised that fulfilling our economic ambitions in the modern world, would require that we foster a society familiar with technology.

In accordance with the policies contained in the “Vistas of Prosperity and Splendour” vision statement, the Government will encourage innovation through the use of technology in both the public and the private sectors.

President Rajapaksha emphasised on the policies and legal framework required to improve the technology sector, as well as to simplify the functioning of the state sector and markets through the use of IT as a tool for broader digital governance.

“Action has already been taken to create five technology parks with all facilities in five identified districts to encourage entrepreneurs and startups in the technology sector.”

LCB Finance to be listed at CSE

February 12, 2021 byNews Admin No Comments
Lanka Credit and Business Finance Ltd., (LCB Finance) announced that it will  be listing its shares on the Colombo Stock Exchange (CSE).

July 25, 2021 byNews Admin No Comments
While the pandemic wreaked havoc across many sectors and industries, to some sectors the pandemic was, in fact, a blessing in disguise; the telecommunications, electronics, online delivery, and life i