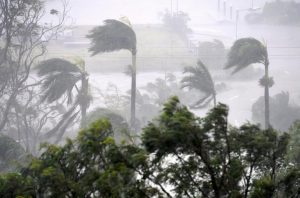 The weather forecast report for the next two days by the Department of Meteorology indicates the occurrence of showers or thunderstorms at times in the Western, Sabaragamuwa, Central, and North Western Provinces and Galle and Matara Districts.

Fairly heavy rainfalls exceeding 75 mm are likely at some places in the Sabaragamuwa and Central Provinces and Galle and Matara Districts.

A few showers are predicted to occur in the Northern Province and the Anuradhapura District. Showers or thunderstorms may occur at a few places in the Uva Province as well as Ampara and Batticaloa Districts in the afternoon or night.

Strong gusty winds of about 50-60 kmph can be expected across the island, particularly in the Northern, North Central, and North Western Provinces; Trincomalee and Hambantota Districts; and the western slopes of the Central Hills.

Wind speed can increase up to 60-70 kmph at times in the deep and shallow sea areas extending from Galle to Pottuvil via Matara and Hambantota. These sea areas can be rough or very rough at times.

Fishermen are informed that it will be dangerous to venture into these sea areas until 13 October 2020.

Wind speed can increase up to 50-60 kmph at times in the sea areas off the coasts extending from Negombo to Mullativu via Puttalam, Mannar, and Kankesanturai. These sea areas will be rough at times.

Gusty winds of up to 50-55 kmph can be expected in the other sea areas around the island and will be fairly rough at times.

Fishing and naval communities are requested to be vigilant in this regard.

Freedom does not end with victory: PM

February 4, 2022 byRuwani Fonseka No Comments
Prime Minister Mahinda Rajapaksa, in his message for the 74th Independence Day of Sri Lanka, remarked that freedom does not end with victory.

“It is something that should be won day by day, and it is

To IMF or not to IMF?

December 18, 2021 byNews Admin No Comments
Economic experts have called for the immediate activation of the proposed economic assistance package from India, insisting that an International Monetary Fund (IMF) bailout is the only viable next st