* On the hindsight, former President and Speaker of the Parliament here, Mohamed Nasheed, who had travelled abroad to treat injuries he sustained in an assassination attempt in May, is set to return to Maldives today

* The Maldivian security authorities ordered that the non Maldivians should bring their passport and work permit to enter the stadium for the remaining matches, due to a ticket issuing problem that sparked protests on Sunday (10)

* Nepal is the other finalist, with a record as same as Maldives

* India, Bangladesh, and Sri Lanka are thrown out of the final this time

* Anyway, Nepal is to meet Bangladesh tomorrow (13) at 4 p.m. before Maldives take on India at 9 p.m. here at the National Football Stadium in Male. 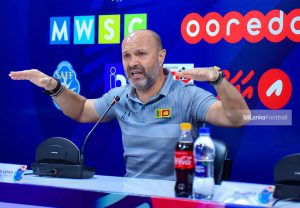 After the Sri Lanka-Maldives clash on Sunday (10) where the hosts won 1-0, Sri Lanka Head Coach Amir Alagic expressed his disappointment at the referees’ decisions throughout the tournament.

“Refereeing at every 50-50 ball was given in favour of Maldives. I think the AFC (Asian Football Confederation) should also think seriously to bring the best possible referees,” Alagic said.

“They are lacking skill in this region. We are not stupid. So we need much better referees for the next SAFF games because you know it is more than obvious that in every game, they had some mistakes. That is not normal,” he added.

Over 7000 children to participate in kids athletics championship

February 26, 2019 byEaswaran No Comments
Over 7000 children are to participate in the All-Island Schools Kids Athletics Championship next month.

May 29, 2021 byRevatha No Comments
Suarez vows to stay at Atletico