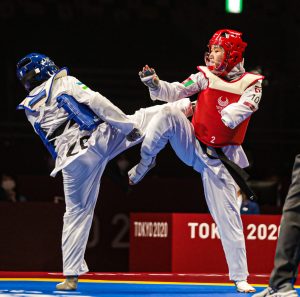 The 23-year-old competed in the ‘K44’ taekwondo category. The category is for athletes with unilateral arm amputation (or equivalent loss of function), or loss of toes which impact the ability to lift the heel properly. Khudadadi falls to the former situation of the two.

She had previously told CBS News when it was unclear if she would be able to get to Tokyo that, “we are all under the control of the Taliban and this is a big nightmare for me and my family.”

Then in the afternoon, Khudadai lost in the Repechage Round held for the losing players, allowing them a chance to proceed further, against Ukraine’s Marchuk Victoriia 48-34, 5-10, 8-10, 35-14. 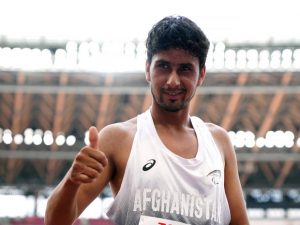 Afghan Paralympians Hossain Rasouli and Zakia Khudadadi feared they would miss the Tokyo Paralympics when the Taliban takeover of Afghanistan initially prevented them from flying to Tokyo.

But after a harrowing few weeks filled with uncertainty and doubt, Rasouli finally got his chance to compete in the Games on Tuesday (31 August) after escaping his homeland last week, reported CBS News.

Rasouli, whose left hand was amputated as a result of a mine explosion, was still able to represent Afghanistan at the Paralympics despite missing the event he had qualified for.

The 26-year-old trained primarily to be a sprinter for the 100-metre dash, but he instead competed in the T47 long jump, where he finished in last place.

International Paralympic Committee (IPC) spokesperson Craig Spence said that Rasouli had been “super excited” to compete and called it a “special occasion” for him.

A show of solidarity

The last few weeks have been a whirlwind for Rasouli and Khudadadi. Earlier this month, the IPC said that Afghanistan’s National Paralympic Committee would not participate in the Tokyo Paralympics because they couldn’t grab a flight out of the country. The Paralympics even displayed the Afghan flag in “a show of solidarity” during the opening ceremony despite the team not having a representative present.

However, following desperate pleas from Khudadadi, both she and Rasouli were evacuated from Kabul and arrived in Tokyo on Saturday (28 August).

They had been sequestered in the Paralympic Village for privacy and safety reasons until Tuesday, when Rasouli competed.

On Monday, IPC President Andrew Parson told reporters that welcoming the two Afghan athletes was his personal “best moment” of the Games. He promised that the IPC would “provide everything in our capacity” to ensure “the safest” and “calmest” environment for them.

A day earlier, Spence said the players’ well-being is their priority and would not grant media access to the athletes.

“Human life is the most important thing here… This is about these athletes fulfilling their dream of being able to attend the Paralympic Games,” Spence said.

Football News From the World

July 15, 2021 byRevatha No Comments
He wants to know the fate of his cricketing future