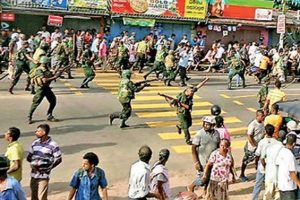 The Attorney General has filed indictments against the suspects of the Rathupaswala shooting case before the Trial at Bar bench in Gampaha today, the Coordinating Officer of Attorney General Nishara Jayaratne said.

On a request by the Attorney General(AG), Chief Justice(CJ) Jayantha Jayasuriya on the 28 August appointed three trial at bar benches for the hearing of the 3 high profile cases including the Rathupaswala shooting case.

January 17, 2021 byRusiru Keppetipola No Comments
Massive financial losses in the Mahapola Online Lottery Scheme amounting to millions of rupees have been revealed in a recent special audit report by the Auditor General’s Department on the management