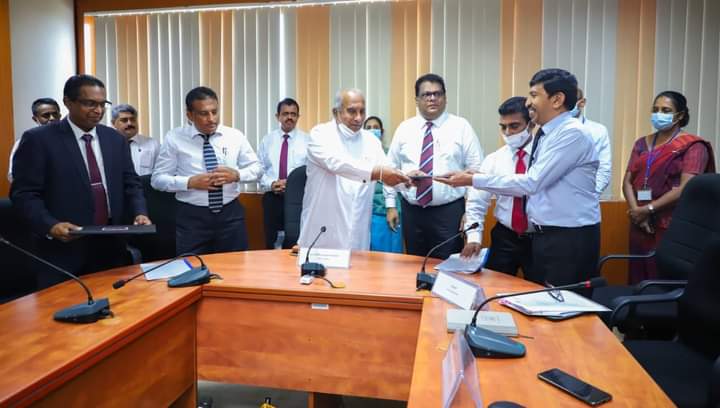 The Ministry of Transport and the Central Bank of Sri Lanka recently signed a four-party agreement to introduce the Sri Lanka Transit Card (SLTC).

The SLTC initiative, which had been on the drawing board for many years, will finally come to light, in line with the President’s manifesto, which proposed a single transport e-ticket system to be introduced in Sri Lanka.

The proposal to implement the SLTC, submitted by LankaClear, with approval from the Central Bank and support from the Ministry of Transport, received Cabinet approval in February 2021.

SLTC will be issued by all authorised financial institutions under the National Card Scheme (NCS) facilitated by LankaClear. SLTC will be the first-ever two-in-one card to be introduced in Sri Lanka that comes with a unique stored-value component, in addition to debit/credit features, built into a single chip card.

This unique feature of maintaining a single card to be used across ATMs, POS machines and all transport platforms, provides a citizen with the convenience of using a single card to carry out multiple modes of transactions. The implementation of a single standalone card is also expected to create significant savings for the Government, as opposed to printing and distributing separate cards for each transport service.

In the pilot phase, the SLTC will be accepted by public and private buses in select routes identified by the Ministry of Transport, and will subsequently be extended to other routes and to Sri Lanka Railways.

The SLTB and NTC are in the process of implementing the required technology back-end to facilitate this card in public and private buses. LankaClear has come forward to operate the network to facilitate the transactions that are carried out for public transport using SLTC, under the guidance of the Central Bank, free of charge.

The four-party agreement for the implementation of SLTC was signed between the Sri Lanka Transport Board (SLTB), National Transport Commission (NTC), People’s Bank, and LankaClear (Pvt) Ltd. at the Ministry of Transport on 22 April 2021, under the patronage of Transport Minister Gamini Lokuge, and State Minister of Vehicle Regulation, Bus Transport Services and Train Compartments, and Motor Car Industry Dilum Amunugama, as well as secretaries and officials from both ministries. SLTB Chairman Kingsly Ranawaka, NTC Chairman Sashi Welgama, LankaClear GM/CEO Channa de Silva, and People’s Bank Senior DGM K.B. Rajapakse signed the agreement on behalf of their respective organisations.

July 1, 2021 byNews Admin No Comments
Releasing a report on the insurance industry, First Capital Research noted that among Asian countries, Sri Lanka is expected to record industry growth of 20% in 2021, as Sri Lanka’s insurance market i