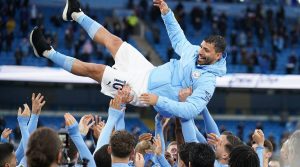 Manchester City, Bayern Munich, and Inter Milan were already celebrating their championship prior to final week. But the Ligue 1 title and the LaLiga title races went right down to the wire and it was Lille and Atletico Madrid who joined the rest of the three clubs last Sunday (23).

It was the best possible farewell for Manchester City striker Sergio Aguero. The Citizens were already crowned champions two weeks before, but they turned up with their A Game against Everton to finish off a season of pure dominance. In the first half, Kevin De Bruyne and Gabriel Jesus scored goals for City. Second half was yet another dominant display from the champions. Rising star Phil Foden added yet another goal to the tally and then arrived Aguero for one last time at the Etihad. He came and he conquered yet again with two stunning goals for the fans to remember. With his second goal and his 184th goal for City, he also became the highest-ever goal scorer for a single club in the Premier League, going past Wayne Rooney who scored 183 goals for Manchester United.

United ended at second best for only the second time since Sir Alex Fergusan left the Old Trafford. In their final game, they beat the Wolves by 2-1 and for the first time completed the whole League without an away defeat for the first time in the club’s history.

The first two spots were secured a few weeks back, but the fight was for the third and fourth spots in league. Leicester who stayed in top four for the longest time this season, slipped out yet again as they suffered a 4-2 loss at the hands of Tottenham Hotspur. Liverpool managed to creep in to 3rd place after they beat Chrystal Palace by two goals to none. Chelsea on the other hand was defeated by Aston Vila, but their superior “GD” (goal difference) kept them inside the top four.

Leicester finished at 5th place while West Ham United made it to 6th and secured European Football for the first time in this Century. Arsenal also finished off the season with a win, but it wasn’t enough to secure European football next season. For the first time in 25 years, Arsenal will be out of Europe.

On Saturday (22), Atletico Madrid secured the LaLiga title in the final week after a tight race with their city rivals Real Madrid. On Sunday (23), it was Lille who managed to hold off defending champions PSG in the last week to lift the title after 10 years. Their previous title came in 2011, when Eden Hazard was playing for them. However, the title was decided by just one point, PSG needed Lille to lose their match in the last week but it didn’t happen. Lille who faced Angers on Sunday, scored two first-half goals from Jonathan David and Burak Yilmaz to take the early lead. Angers searched for a comeback but they found only a goal in injury time through Angelo Fulgini.

PSG also managed to win their last game against Reims by four goals to none. But it wasn’t enough to give them the title this year. The remaining two spots in the top four were taken by Monaco and Lyon.

* Serie A: Juventus make it to top four

As Inter Milan were crowned champions of Italy, Juventus scrapped their way into the top four on Sunday. Along with Serie A champions Inter, AC Milan and Atlanta were already safe in the top four before the final week. The fight for the remaining spot was between Juventus and Napoli. Juventus had to win and they did it easily against Bologna. Goals from Federico Chiesa, Alvaro Morata (2), and Adrien Rabiot earned Juve a 4-1 win.

Napoli, who were in fourth place, came into the final week with a point lead on Juve. They simply had to win the final game against Verona but they bottled it. Amir Rrahmani put Napoli ahead in the 60th minute but Verona found the equaliser in the 69th minute through Davide Faraoni. As Juventus won their game, Napoli slipped to fifth place.

Square Cuts by Sudat Pasqual: Lack of a selection ideology

April 19, 2021 byRevatha No Comments
It is causing irreparable damage to cricket in SL, not Mahela Jayawardene