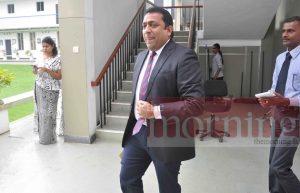 Kariyawasam is alleged to have used state funds to print his image and a statement from him in textbooks issued to Government Schools.

Director (Supplies) of the Ministry of Education I.M.K.B. Illangasinghe recently testified before the PCoI over the textbook issue and he later filed a complaint alleging that Kariyawasam had issued an order for transfer to the Education Services Establishment Division.

This was later confirmed by Secretary to the Education Ministry Nihal Ranasinghe, who also testifying before the commission.

Candlelight vigil in memory of Yvonne

August 26, 2019 byEaswaran No Comments
The UN Special Rapporteur on Freedom of Religion or Belief, Ahmed Shaheed, who was in Sri Lanka on an official from 15 August 2019.