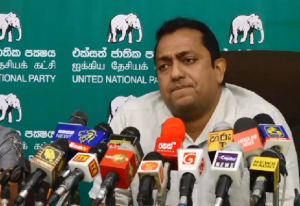 United National Party (UNP) General Secretary Akila Viraj Kariyawasam has reportedly offered to resign from his post in a bid to solve the ongoing issues within the UNP.

Kariyawasam has informed UNP leader Ranil Wickremesinghe about his willingness to step down.

However, he has not submitted his resignation as yet.

Meanwhile, Wickremesinghe has said that he will attempt to resolve issues with UNP Deputy Leader Sajith Premadasa in order to prevent a split in the UNP and to ensure the UNP contests the upcoming election as a united front.

Museums to reopen tomorrow: Entrance limited to 15 at a time

June 30, 2020 byTSM Web Desk No Comments
The museums functioning under the National Museum Department are to reopen tomorrow (1 July) under the health guidelines issued by the Director General of Health Services (DGHS).