‘Alcohol breath does not mean alcohol in blood’

January 14, 2021 by Rusiru Keppetipola No Comments 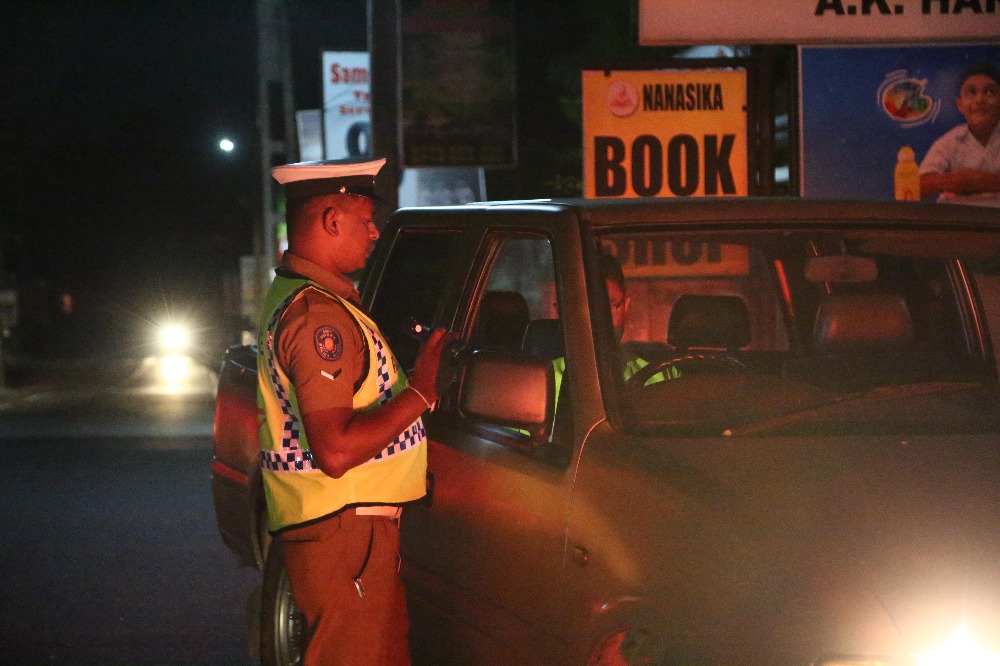 A police officer checks a motorist for drunk driving

Making the legal presumption that alcohol is present in the blood based solely upon the smell of liquor, as it is done in Sri Lanka, is erroneous from the perspective of both science and evidence, a group of local researchers explained.

Liquor is defined under the Offences Committed under the Influence of Liquor (Special Provisions) Act No. 41 of 1979 as amended, to include widely consumed alcoholic beverages such as spirits, wine, toddy, and beer, and all liquids consisting of or containing alcohol.

In Sri Lanka, the smell of liquor is a legally accepted indicator of drunkenness. Section 11 of the aforementioned Act holds that: “A person shall be presumed to be under the influence of liquor, if at or about the time of the commission of the act, he is smelling of liquor, or if he conducts himself in such a manner that it may be reasonable to infer that he has consumed liquor, unless evidence to the contrary has been adduced.”

Accordingly, it is presumed that for the purpose of this Act, a person is considered to be under the influence of alcohol (ethyl), if he was smelling of liquor at or about the time of the commission of the said act. Offences under this Act pertaining to consumption include causing annoyance or damage to public property whilst under the influence of liquor.

Based on this indicator (smell of liquor), the Police seek scientific evidence from medical experts on whether a certain person was smelling of liquor, which would then lead to subsequent prosecution under this law. Section 11(2) of the Act states that: “The report of a government medical officer to the effect that a person is under the influence of liquor or the report of an approved operator to the effect that the concentration of alcohol in a person’s blood is equal to or exceeds the prescribed limit shall be deemed to be sufficient evidence of the facts therein contained, unless evidence to the contrary has been adduced”.

For this purpose, in the Medico-Legal Examination Form (MLEF) utilised for the purpose, there is a box stating “breath smelling of alcohol” to be ticked, where a medical expert needs to indicate the status. An endorsement to the presence of the smell of alcohol on the breath by the medical expert in the MLEF could lead to a conviction under this Act.

However, the researchers questioned as to whether the breath really does smell of ethyl alcohol.

Ethyl alcohol, they note, is almost odourless and that its smell is considered to be due to the presence of volatile substances called congeners which are produced simultaneously during the fermentation process of ethyl alcohol. They further note that sometimes, aromatic congeners (such as acetone, acetaldehyde, esters, tannins, and aldehydes) are wittingly added to some alcoholic beverages of inferior quality in order to produce an odour so as to convince consumers that a particular beverage is of good quality. Also, the situation is further complicated by the fact that congeners are produced naturally within the body. Therefore, they observe, the odour of alcohol frequently detected on people after the consumption of alcoholic beverages is not due to alcohol but owing to by-products of the alcohol manufacturing process or congeners.

Regarding the presence of the smell of alcohol on the consumer, they point out that the smell of an alcoholic beverage can persist in body tissues and on the breath for several hours even after all the alcohol has been metabolised or eliminated from the body. The researchers cited an instance where though the odour of alcohol was detected at autopsy, the blood-alcohol levels had returned negative.

Moreover, it is also possible, they added, that a person who has consumed another beverage containing the aforementioned congeners will also smell of alcohol. According to them, the reason for this is that there are different metabolic pathways in the body pertaining to, on the one hand, the degradation of ethyl alcohol, and on the other, the degradation of the rest of the congeners. Therefore, it should be noted that congeners can enter the human body even without the consumption of alcohol, they explained whilst reiterating also that congeners are naturally produced within the body.

In terms of congeners and where they are found, the researchers noted thus: “Acetone is produced naturally in the human body during ketoacidosis (which is described as a metabolic state caused by the uncontrolled production of ketone [a functional group in organic chemistry which has a particular structure containing substituents which have carbons] bodies which are water soluble molecules having the ketone group produced by the liver from fatty acids due to various conditions and situations, that in turn causes metabolic acidosis, the latter an electrolyte [substance that produces an electrically conducting solution when dissolved in a polar solvent like water] disorder involving an imbalance in the body’s acid base, and one which requires medical attention), and gives the characteristic smell of alcohol on the breath.

“Acetaldehyde is found in alcohol-free beverages, jams, bread, vegetables, fruits, and milk. Esters are present in commonly consumed fruits and vegetables, such as apples, apricots, mandarins, mangoes, papayas, red and chilli peppers, potatoes, or squash. Tannins have been found in a variety of plants utilised as food and feed such as sorghum, millets, barley, legumes, dry beans, pomegranates, cranberries, blueberries, hazelnuts, walnuts, pecans, peanuts, and chickpea. Aldehydes are formed endogenously due to chemical processes while dietary aldehydes and drugs that are aldehydes or reactive aldehyde metabolites can introduce aldehydes into the body without the consumption of alcohol.”

Pertaining to these, the researchers observed that these congener substances are also present as excipients (substances formulated alongside the active ingredient of a medication and included for the purpose of long-term stabilisation, bulking up solid formulations that contain potent active ingredients in small amounts, or to confer a therapeutic enhancement on the active ingredient in the final dosage form, such as facilitating drug absorption, reducing viscosity, or enhancing solubility), in some herbal medicines and pharmaceutical drugs.

Many esters including aromatic ones, they add, are used as medicines to treat, for example, rheumatic arthritis and to stimulate the central nervous system. Furthermore, the researchers elaborated on the fact that the pharmaceutical industry has discovered that certain undesirable properties of drugs, such as bad taste (found in certain bitter-tasting antibiotic drugs) or the swelling of the skin at the spot of an injection, can be avoided by converting the original drug into an ester, and thereby making the flavour less harsh in the case of the former.

Therefore, the researchers called on convictions made under this Act based upon the smell of liquor to be halted with immediate effect and for the said legislation to be amended accordingly whilst simultaneously changing the MLEF used for the purpose.

November 1, 2021 byAazam Ameen No Comments
A suspected underworld gang member who had attempted to rob a house in the Mulleriyawa area has reportedly been beaten to death by residents in the area.

August 2, 2021 byAazam Ameen No Comments
Deputy Director-General of Health Services Dr. Hemantha Herath stated today (02) that is important for Sri Lanka to prepare for the administration of a possible third dose of anti Covid-19 vaccines.