All Blacks make ring of changes 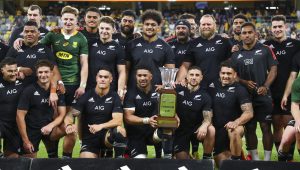 Ian Foster has made some interesting changes for the final Test of the Rugby Championship 2021 at the Cbus Super Stadium in Gold Coast, Australia on Saturday (2 October).

Richie Mo’unga will make his New Zealand return from the bench as Foster named the team to face the South Africa.

The starting forward pack of All Blacks remains unchanged from last week’s thrilling win over the Springboks. However, Luke Jacobson returns to the No. 8 after missing out on last week’s centenary game for illness.

Asafo Aumua makes it to the bench as reserve hooker and George Bower replaces Karl Tu’inukuafe.

In the back line, Brad Weber will start at half-back with Thomas Tekanapu Rawakata ‘TJ’ Perenara on the bench while Anton Lienert-Brown returns from injury to the 13-jersey, with Rieko Ioane moving to the left wing and Sevu Reece beingnamed on the right.

Wingers George Bridge and Will Jordan, who both struggled under the Springboks’ high kicks last weekend, didn’t make the match-day 23. 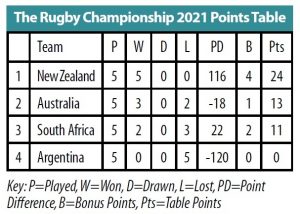 Springboks have had a disappointing tour down under, suffering two defeats to Australia and then losing out to All Blacks last week.

Coach Jacques Nienaber made only two forced changes to the starting 15 for this final game of the Rugby Championship.

Starting prop Ox Nche replaces Frans Malherbe who suffered a neck injury, while loose forward Jasper Wiese is on the bench for Marco van Staden who will miss out due to a shoulder niggle.

Speaking to the media, Nienaber said, “We made a big step up in terms of our performance last week and having reviewed the match, there is no doubt we delivered a performance worthy of a victory. Last week we stuck to our DNA and style of play, and with a little more luck, we could have come away with the result, so we need to ensure that we are better at it this week.”

Wallabies get ready to finish it on a high

Australia have enjoyed three back-to-back wins over South Africa and Argentina as Coach Dave Rennie named his team to face the latter in the final round of the Rugby Championship on Saturday (2).

Two notable inclusions in the Wallabies’ squad were back-rower Sean McMahon and prop Greg Holmes, who ate making their international returns on Saturday.

McMahon will make his return via the bench, which will be his first appearance in the gold jersey since November 2017 against Scotland.

The 38-year-old Holmes is set to become the oldest player to play for the Wallabies since World War II.

Along with this, Darcy Swain and Pete Samu have been named in the starting 15. Swain will partner Izack Rodda as experienced Matt Philip goes back to the bench.

Samu comes into blindside flanker, alongside Michael Hooper and Rob Valetini in the back row.

There is one change to the back-line as Jordan Petaia has replaces Marika Koroibete who is heading home to Melbourne after last week’s 27-8 win.

The Canberra-based Brumbies’ hooker Lachlan Lonergan comes onto the bench alongside Holmes and McMahon. He is joined by his Brumbies’ team-mate Tom Wright and Waratahs scrum-half Jake Gordon.

A bitter end to disappointing Rugby Championship for Argentina as six players were left stranded in New South Wales, Australia after a breach of Covid-19 protocols there.

The group were stopped at the border on Wednesday evening when they tried to return to Queensland and had to spend the evening at a hotel.

The six players have since been ruled ineligible for selection, but the Wallabies’ Rugby Championship Test against Argentina at Cbus Super Stadium tomorrow will go ahead.