Allegations of bribery and corruption | 28 persons in custody 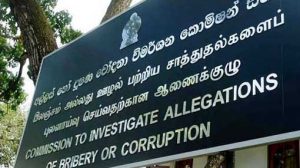 There has been a total of 28 arrests pertaining to bribery or corruption in recent months, The Morning learnt.

“We have carried out 23 raids since January this year and arrested 28 people,” Commission to Investigate Allegations of Bribery or Corruption (CIABOC) Director – Investigations SSP Padmini Weerasuriya told The Morning.

She said that Mannar public officials had been arrested on Wednesday (19) for accepting a bribe of Rs. 60,000.

“On Tuesday (18) we carried out three more raids.”

Weerasuriya said that among those arrested were a principal, eight police officers, a Transport Board official, a Department of Immigration official, a divisional secretary, Provincial Secretary Assistant Director – Planning, a grama sevaka, a Central Cultural Fund official, a Health Ministry official, a Motor Traffic Department official, and six civilians.

“Giving, receiving, or even facilitating a bribe is illegal,” she asserted.

November 2, 2021 byNews Admin No Comments
The report containing the recommendations of the Cabinet Subcommittee appointed to formulate a plan to recover the Ceylon Petroleum Corporation (CPC) from its present loss-making situation is due to b

The 2020 Advanced Level Examination was held from October 12,