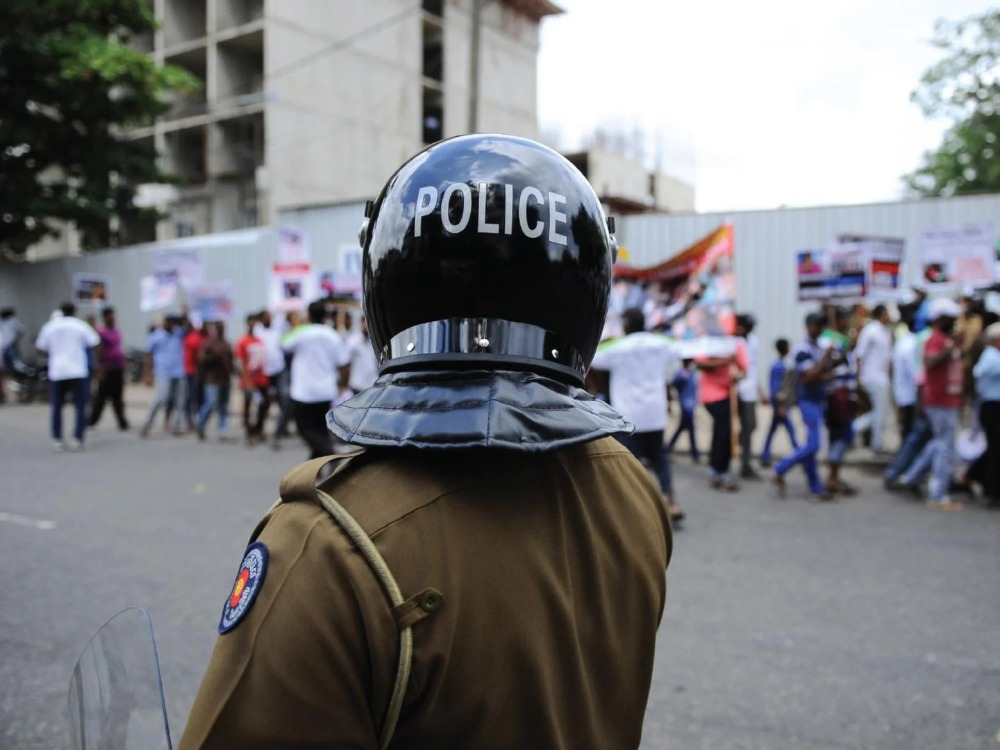 Alleged cases of police brutality have come to light with three incidents being reported within a two-week period.

According to reports, the Police have been accused in connection with three recent deaths.

Talk of police brutality resurfaced following the death of a 47-year-old on 21 May in the Midigama area in Weligama, Matara. According to the CCTV footage, the individual was assaulted by a helper while two police officers were watching the incident. Following the assault, a bus runs over the unconscious individual.

In another incident, a 22-year-old youth in East Iruthayapuram, Batticaloa had been arrested by persons who allegedly claimed to be intelligence officers and had died on 3 June while in detention.

In a third incident, on 6 June, a 48-year-old man had been arrested for violating quarantine laws and the Police claimed that the individual had jumped from the moving police vehicle in Panadura North. However, the wife of the deceased has denied the claims made by the Police and alleged that her husband was beaten by the police officers who captured him, resulting in his death.

The series of incidents related to alleged police brutality has raised fears that there is a growing lack of accountability over police abuse in Sri Lanka.

Speaking to The Sunday Morning, Bar Association of Sri Lanka (BASL) Ex-Co member Attorney-at-Law Upul Kumarapperuma said that according to his view, the issues at the Police Department have not been addressed adequately and there is an urgent need to depoliticise the whole force.

He said: “The main issue is when a local politician or whoever covers or protects the police officers and they have no fear of doing anything. First of all, we have to depoliticise the whole organisation, and there should be an independent body to govern the police force.”

Kumarapperuma further explained that the formulation of an independent body to govern the force would avert unnecessary interferences.

“That is why the 19th Amendment to the Constitution came into effect, but now, things have been changed. The Executive has absolute power and the Police is also part of the Executive. If the subordinate thinks that the hierarchy will protect them, these incidents can happen and we can’t prevent it.”

In the letter, the CPRP alleged that the Police have a long history of violence, brutality, and custodial deaths that has cost many lives and that it has become a norm.

Speaking to The Sunday Morning, CPRP Chairman Attorney-at-Law Senaka Perera said that according to the law, the Police should be responsible for the safety of all suspects in its custody.

“If there is any harm to a suspect in police custody, the Police or the Government have to take the responsibility for that incident. Because through the fundamental rights that have been preserved in the Constitution, other laws, and the judgements that have been made by the Supreme Court, these basic rights are afforded to all individuals.”

According to the judgment delivered by Justice S. Thurairaja, “Sri Lanka’s legal system provides for investigation, inquiry, trial, and punishment by proper authorities which is the base of democracy and the rule of law”.

As per Article 13(4) of the Constitution, no person shall be punished with death or imprisonment except by order of a competent court. Hence, even a convicted criminal has a right not to be arbitrarily deprived of his life, except under a procedure established by law.

However, Attorney Perera said that by repeating these kinds of abuses and custodial deaths, the Police is violating several articles in the Constitution, the Police Ordinance, and relevant international conventions ratified by Sri Lanka.

He also said that the CPRP has written to two United Nation (UN) Special Rapporteurs regarding recent deaths and torture in police custody and have requested them to take up these concerns with relevant authorities.

Responding to The Sunday Morning’s queries, Perera further said that despite several alleged deaths and assaults that happened in police custody over the years, the responsible authorities had failed to take concrete measures to prevent such incidents.

“The Public Security Ministry has to provide explanations on how the suspects in police custody would repeat the same threat to the armed police over and over again. This is the question we have as citizens in this country,” he said.

‘No change in structure of Police’

Meanwhile, speaking to The Sunday Morning, Public Security Ministry Secretary Major General (Retd.)  Jagath de Alwis said that there was in fact no significant rise in brutalities to warrant a change in the structure of the Police.

“There is no brutality; comparatively, one or two are happening. We are not trying to change the structure of the Police Department. What we are trying to do is to create a more people-centric mechanism and we are trying to deploy several officers in charge of villages.”

De Alwis further said that the President is also aware of the current issues that arise within the local police and he wants the Police to be friendlier with the population.

He said: “Whether it is brutality or any other violence by the Police, the public can complain against them to the Police Commission and we have the power to investigate. We can inform the IGP to take necessary action against the police officers who are found guilty of misconduct.”

Adding the fact that the Police Commission is studying case laws, the former IGP said that there are several case laws where the magistrates have found the fabrication of evidence by the Police.

Initially, once the Commission receives a complaint, it prepares a plan to conduct the investigation and the necessary documents are obtained by the Senior Superintendent of Police (SSP) at the relevant division, Chairman Fernando said.

Apart from the fundamental rights application, the Convention against Torture and Other Cruel, Inhuman, or Degrading Treatment or Punishment Act (No. 22 of 1994) is also used to take legal action against police brutality.

“The perpetrators can be indicted in terms of that Act and there’s a minimum mandatory sentence that is seven years,” Kumarapperuma said.

He said that delictual remedy is also another way of taking legal action against these kinds of matters and in that, the individuals could go to the respective District Court and file action for damages.

“Apart from that, a person can go to the Human Rights Commission (HRC) even against torture, but the recommendation of the HRC has no binding power for fundamental rights petitions. The HRC can merely provide recommendations to the Police Department. So, in that manner, the Police Department can either implement it or simply disregard it,” he added.

The Bar Association of Sri Lanka (BASL) has recently sent a letter to the Inspector General of Police (IGP) concerning alleged violations of lawyers’ rights by the Criminal Investigation Department (CID) and Terrorism Investigation Division (TID).

Responding to The Sunday Morning’s query on the IGP’s response to the above-mentioned letter, Police Media Spokesman DIG Ajith Rohana said that with the existing laws in the country, the CID and TID have been advised to accommodate lawyers obtaining statements from the suspects or detainees.

BASL Secretary Rajeev Amarasuriya said that these officers are violating the rights of the lawyer as well as the rights of the client, thus urging the IGP and the heads of the two investigation units to ensure these rights are honoured.

January 22, 2022 byNews Admin No Comments
With ongoing supply and pricing issues surrounding Liquefied Petroleum Gas (LPG) cylinders, their usage has become somewhat of a conundrum for Sri Lankans, with many resorting to wood, electric cooker

Sunny Side Up: Duminda’s new ride