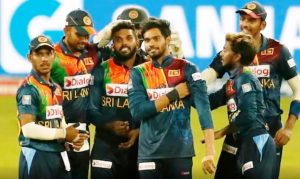 Underperforming deliberately with a view to upsetting the apple cart: The culprits need to be punished, only for the betterment of national cricket

Not match-fixing, but purportedly deliberate underperforming with malicious intent

Sri Lanka national cricket selectors, headed by Pramodya Wickramasinghe, are to meet the Sri Lanka Cricket (SLC) hierarchy today (16) with a view to evaluating the progress of the national team following their defeat against South Africa in the recent limited-over series.

Sri Lanka won the three-match One-Day International (ODI) series 2-1 against South Africa before being trounced by them 3-0 in the subsequent three-match Twenty 20 Internationals (T20Is) on Tuesday (14).

Did Sri Lanka play to their fullest potential? Did every single player of the team give their maximum to a common cause?

We found out yesterday (15) that at least two of the regular Sri Lanka players did not play to their full potential or deliberately underperformed, a highly questionable act which had a direct influence on the final outcome of the South Africa T20I series.

After the Morning Sports revealed the matter through an official tweet last afternoon, there were many inquiries as to what happened and who the culprits were.

It is pertinent to note that the issue has nothing whatsoever to do with either match-fixing or spot-fixing. The parties concerned had been overly worried about the two players’ continuous underperformance and poor commitment, which boils down to sabotage.

Sri Lanka are to leave next month for the T20 World Cup, their next assignment, in UAE and Oman. A 15-player squad and four travelling reserves were announced by the authorities for the World Cup on Friday (10).

An SLC source revealed to the Morning Sports yesterday that the issue of at least two players not playing to their full potential had been a point of discussion at the Sri Lanka team meetings, especially during the South Africa T20I series.

“The (Sri Lanka) coaching staff has given a final warning to those two players (who played the T20I series against South Africa) for not showing their full commitment. They had been accused for the likelihood of deliberately underperforming,” the said SLC source said.

Millions of spectators expect Sri Lanka to win, particularly after a rejuvenated team under Dasun Shanaka beat India in the T20Is and South Africa in the ODIs.

If someone in the very playing eleven is deemed not giving their full commitment to the team, in such a context, is tantamount to misleading a country and undermining the dreams and aspirations of millions of very loyal cricket fans.

Scant respect to the National Cap

The Morning Sports learns that the two of the players concerned are a leading top-order batsman and a prominent a spin-bowling all-rounder in the Sri Lanka national team.

“One of the talking points (in those meetings) had been the way the two players had worn the national cap during matches. They had done so with the least respect to it,” the above source noted.

Scant respect to national duty, poor commitment on the field, and their deliberate underperforming had been highlighted in those discussions following the defeat and the two players are likely to get a reprimand in some form or the other, the source further said.

After you cross the line

“One quite obviously tried to play a very safe game keeping in mind his franchise commitments that were coming up. He didn’t give his maximum in the field probably fearing injury that would have cost him a couple of millions,” he further revealed.

The other player, the top-order batter, has reportedly created a fear psychosis among the newcomers in the national side, for he is not talking well to those new faces as a senior, he noted.

Misunderstandings and factionalism are part and parcel of probably every national team, both at present and in the history, but the usual norm is that when you have ‘crossed the boundary line’, you ‘switch off’ all those differences and play as one family for achieving one single goal – the objective of your country and its sports lovers.

It is also understood, in such a context, that those who had been at the receiving end of the present national selectors’ newly-introduced ‘youth policy’ are still haunting in the wilderness.

There may be hidden, powerful forces that want to see the back of Dasun Shanaka as the Sri Lanka white-ball Captain pretty soon, the source speculated.

Their long arm may be still trying to manipulate the affairs in and out of the playfield. And this possible underperforming might be part of that conspiracy and an effort to sabotage, the above source said.

“Having your agents within the national playing eleven will be handy for those outside forces. Yet they need to understand that it is the national team that is going to suffer at the end of the day,” he added.

The Board needs to act

It is hoped that the SLC hierarchy will seriously look into this most pertinent issue that hinders the progress of the Sri Lanka team and take necessary action to immediately curb it.

“I expect some serious treatment ordered for such cowardly acts. You may be the best player in the world but, at the end of the day, you play for your country and you represent millions of its people. No single person is above the country no matter how good he is,” the source further opined.

“The Board needs to act soon. If Sri Lanka is continuing to lose like this, with players having their hidden agendas, the end result could be that the game’s image will be badly tarnished and the sponsors will be discouraged. The TV rights revenue will go down,” he added.

March 11, 2020 byRevatha No Comments
After three matches, Sri Lanka are in the second place behind India in the ongoing Road Safety World Series 2020, now being held in India