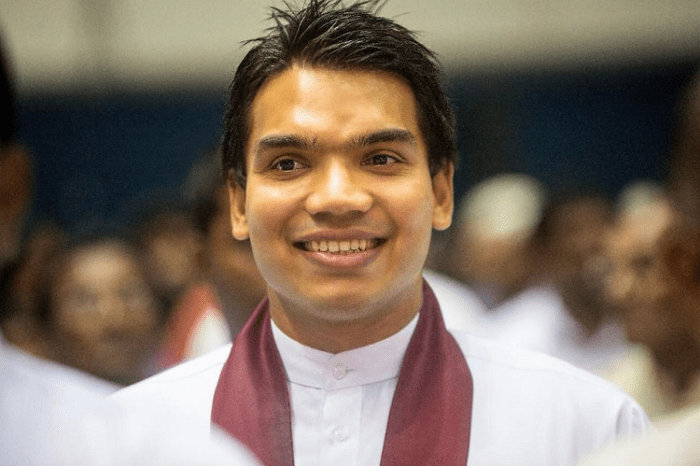 Alliance will field SLPP candidate; no decision on whom: Namal Rajapaksa

United People’s Freedom Alliance (UPFA) MP, loyal to the Sri Lanka Podujana Peramuna (SLPP), Namal Rajapaksa said it was yet to be confirmed if former Defence Secretary Gotabaya Rajapaksa would be the presidential candidate of the party.

Namal Rajapaksa noted that former President, Opposition Leader Mahinda Rajapaksa would announce the SLPP candidate when the time was right.


How is the SLPP gearing up for the presidential election and will the party be fielding its own candidate or supporting the candidate of another party or alliance?

Of course. If you look at former President Mahinda Rajapaksa, he delivered during his tenure of 10 years. None of the presidents in Sri Lanka have been able to do the same. Because of this, we are forming a political alliance around former President Rajapaksa’s policies. We have always believed that what matters are policies and not individuals. So our political agenda is based on policies and the policies that the former President laid out in the Mahinda Chinthanaya in 2005 and strengthened in 2010.
Our policies are based on the interests of the Sri Lankan people and not that of a single political party. So we have a leadership that has delivered what he has promised and we will continue to do so.


What do you think should be the main focal point of the candidate looking to contest and win support at the next election?


There is already speculation that former Defence Secretary Gotabaya Rajapaksa will be the presidential candidate of the SLPP. How do you see his move to contest at the election?

Former President Rajapaksa will decide, along with the party leaders in our alliance, on whom our presidential candidate will be, and at the right time he will make the announcement.


So it is not confirmed that Gotabaya Rajapaksa will be the presidential candidate of the SLPP?

The decision on who the SLPP candidate is will be decided by our party leaders and former President Rajapaksa and not by a parliamentarian. So I will leave it to former President Rajapaksa to make the announcement. It doesn’t matter what the face is, what matters are the policies. If you’re putting a new face with the same old policies, like the UNP, it will be of no use because the last four years have shown that UNP policies are stale.

Minorities want to be heard

September 1, 2019 byThe Sunday Morning No Comments
With the growing heat of the upcoming presidential election, much focus has been on the concerns of the minority communities.