October 9, 2020 by themorningeditor1 liberty No Comments 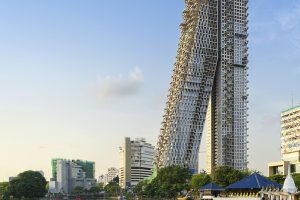 The major shareholders of the Altair project have filed legal action in the District Court of Colombo against PricewaterhouseCoopers Lanka (Pvt.) Ltd. (PwC Sri Lanka), a leading professional body, for its alleged contribution to facilitate a hostile takeover of the Altair project in November 2019 through what the shareholders term a “fabricated and unauthorised” report.

“AA Infraproperties (Pvt.) Ltd., 100% owner of the Altair project together with its parent company South City Projects (Kolkata) Ltd. (plaintiffs) have filed legal action in the District Court of Colombo against PwC Sri Lanka along with Jaideep Halwasiya and Pradeep Moraes, who are alleged to be the main conspirators who perpetrated the hostile takeover,” the major shareholders said in a press statement.

The plaintiff in the District Court of Colombo appealed that the purported report was a “concerted act of conspiracy” of the three co-defendants, to create an environment to facilitate the said “fraudulent and hostile” takeover of Indocean Developers (Pvt.) Ltd. (IDPL), the Altair project company.

They said the Board of Directors of IDPL had never requested nor approved to commence or procced with any such investigative procedure with PwC Sri Lanka in early 2019. PwC has been acting as the internal auditor of IDPL since 2015.

As per the documents submitted with the Court by the plaintiffs’ counsel, the purported report was signed and published on 15 November last year by PwC Sri Lanka, although one of the directors representing the plaintiffs had supposedly raised their objections to the move.

“In fact, on the strength of the purported report, the director concerned along with (the) other director representing the plaintiff were removed from the Board of the Altair company as part of hostile takeover,” the statement read.

The plaintiffs allege that some parts of the report were drafted by Halwasiya and Moraes and not by PwC, which they say could be evident from the material evidence filed in the Court. Furthermore, it has been alleged that PwC has sought information privately and most of the data filed in the report were as per the direction of the conspirator co-defendants, thereby, failing to conduct a fair audit or verification.

It claimed that the directors of PwC Sri Lanka have used the corporate name of PwC in order to avoid personal liability for their fraud. Thus, it contended that all directors of PwC who are all public accountants practicing under the name and style of PwC are liable in person and hence plaintiffs argued that these individuals should incur unlimited personal liability in respect of assignments done under cover of PwC’s corporate name.

In addition, the plaintiffs already filed an oppression and mismanagement action under the Company’s Act, inter alia against Jaideep Halwasiya and Pradeep Moraes to take back the control of the project before the Commercial High Court, Colombo.

Halwasiya, who has 12.5% stake in AA Infraproperties (Pvt.) Ltd., wherein South City Projects have 87.5% in AA Infraproperties, is accused of seizing control of IDPL through issue of preferential shares to a Dubai-based company owned by his son and two of his business associates.

In the process, AA Infraproperties’ shareholding was reduced to approximately 13% from 100%.

In 2018, the Securities and Exchange Board of India (SEBI) barred Price Waterhouse from auditing any listed company in India for two years, saying that the firm was complicit with the main perpetrators of the Satyam fraud and did not comply with auditing standards. SEBI also ordered disgorgement of over $ 1.75 million wrongful gains from the firm and two partners, referred to as “India’s Enron”. This action might perhaps be the first instance when the integrity of a professional accounting body was called into question by way of legal action in Sri Lanka, the statement said.

January 29, 2020 byCharindra No Comments
How can the Government reconcile the presidential circular which directs state entities to reduce unnecessary expenditure while providing 100,000 new jobs in the state sector, asks Advocata Institute.