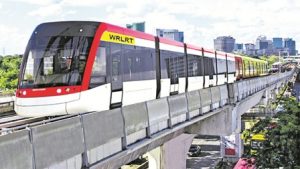 Speaking to The Morning, the Minister said the cabinet proposal to cancel the LRT project was submitted by his Ministry.

The Cabinet of Ministers decided to cancel the LRT Project planned to be implemented in the Western Province taking into consideration the submissions made by the Transport Minister.

The proposed Colombo LRT Project was to be implemented in the western region by utilising funds provided by the Japan International Co-operation Agency (JICA).

In a letter written to Transport Ministry Secretary Monti Ranatunga, which was copied to the Treasury Secretary, Ministry of Urban Development and Housing Secretary, Department of National Planning Director General, Department of External Resources Director General , and Urban Development Ministry Chairman; President’s Secretary Dr. P.B. Jayasundara stated that the President had directed him to request the Transport Ministry Secretary to terminate the project and close the project office with immediate effect, as it was observed that the LRT project was very costly and not the appropriate, cost-effective solution in terms of transport infrastructure for the area.

Furthermore, the letter stated that a suitable transport solution could be worked out in consultation with the Ministry of Urban Development and Housing and the Department of National Planning of the Ministry of Finance.

Another batch of Pfizer vaccines arrive

Dinesh refuses to speak to media on Premajayantha’s dismissal