Aluthgamage reports to the ICC (again) 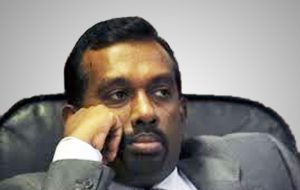 Mahindananda Aluthgamage: I handed over the documents related to my allegation to the ICC on Saturday (4)

Former Sports Minister Mahindananda Aluthgamage told ‘The Morning Sports’ on Monday (6) that he reported his case, regarding the 2011 World Cup final match-fixing allegation, to the International Cricket Council (ICC) on Saturday, 4 July.

“First I made the complaint to the Special Investigation Unit (SIU attached to the Ministry of Sports) earlier. Then I wrote to the ICC. I sent all the documents related to my allegations to the ICC a day before (on Saturday, 4 July),” he said on Monday.

“In 2012 also, I wrote to the ICC on this. I’m going to give my idea on the four issues on my social media pages tomorrow (today). Those are, why there was a delay in making this allegation, why there is no wrongdoing proved by this investigation, whether I went to the ICC with this allegation before or not, and why I say players are not involved in this possible spot-fixing case,” he added.

I made the Act

“I stress that I have never asked anybody to question the players. This investigative body (SIU) which conducted the investigation is one appointed as an independent commission. I’m not happy with the way it conducted the affair. The investigation stopped after recording a statement only of Aravinda de Silva (as an official of the time of the 2011 World Cup),” lamented Aluthgamage.

“I have repeated this allegation 17 times since 2011. I hope to convey my standpoint on the present situation tomorrow (today). I never stopped there. After the 2011 World Cup, I thought there was no law in the country to tackle sports corruption. So, I was the one who initiated this Act (No. 24 of 2019 regarding corruption in sport) and got the cabinet approval for it.”

Sports Ministry Secretary K.D.S. Ruwanchandra told ‘The Morning Sports’ on Monday that the report his Ministry received from the SIU has been forwarded to the Attorney General (AG).

“Now the honourable AG has to advise us on the future course of action of the investigation. He should advise us as to whether the investigation is sufficient or not, whether any further inquiries should be made or not, and so on,”  added Ruwanchandra.

March 15, 2019 byRevatha No Comments
The team was really lucky to survive the gun attack on the Christchurch mosque on Friday.