A diver for over 15 years, Jayawardena’s interests are varied, but his speciality and closest association is with locating and exploring shipwrecks off the coasts of Sri Lanka. Jayawardena is also famous for exploring and mapping the underwater caves in Ella and for his book Ghosts of the Deep which documents in detail the shipwrecks around our island.

Jayawardena explained that shipwrecks are treasures in and of themselves that must be preserved because of their tremendous archaeological value and their role as habitats in marine ecosystems. Shipwrecks develop into prolific breeding grounds for fish and by extension become very productive fishing grounds. This is in addition to the role they play in history and archaeology. Shipwrecks are also an untapped avenue of tourism, and Sri Lanka already sees a number of professional divers visiting solely to explore the shipwrecks off Sri Lanka.

There are threats to shipwrecks, however, and Jayawardena said that activities like dynamite fishing and spearfishing, pollution, illegal salvaging, ghost nets (nets that drift or are abandoned by fishermen that get entangled in shipwrecks), and commercial ship anchoring all pose significant risks to shipwrecks.

Sri Lanka has about 200 to 250 shipwrecks off its coast, spanning from ancient shipwrecks to colonial-era shipwrecks (from the 1700s and 1800s)  to shipwrecks dating both World Wars to modern shipwrecks that were wrecked as recently as 2012.

Jayawardena then described his journey exploring and identifying a wrecked aircraft that he discovered off the coast of Kalkudah. Brought to his attention by a local fisherman in 2014, who had noticed something while fishing there, Jayawardena discovered that what he initially thought was a shipwreck was actually the wreck of an aircraft.

After carefully locating the site through sonar technology, Jayawardena dove in to discover a vast field of debris that had become a hub of marine life. Among the wreckage that was easily identifiable was the wing of the plane, a propeller, and an engine, leading Jayawardena to conclude that the aircraft was a single-engine aeroplane most likely dating to World War II when the British Navy was stationed in the area.

Further investigation of the area revealed that the aircraft was, in fact, a double-engine aeroplane which sent Jayawardena down a path of discovery into Sri Lanka’s World II history to try and figure out which aeroplane it was that had crashed off the coast.

Initially thinking it was a ship based off the British Navy ship, the HMS British Sergeant, which had fought with the Japanese Army off the Sri Lankan coast in the weeks following Pearl Harbour, this was found not to be the case because of the specific construction of the plane.

After closely studying aviation disasters in Sri Lanka over the years, Jayawardena finally hit a breakthrough when a friend noticed that a wheel he had discovered was very similar to the wheels used in a form of a double-engine World War II bomber called a “Catalina”.

This information eventually led Jayawardena to track down the missing plane to the Dutch Royal Air Force that had been based in Sri Lanka for a brief period during World War II when their normal bases in Java were no longer accessible to them because of Japanese occupation.

Seeking the help of the Dutch Ambassador at the Louis Piet, Jayawardena was eventually able to confirm that the mystery aircraft head discovered was, in fact, a Catalina from the Dutch Royal Air Force that had crashed following an engine malfunction in December 1943. 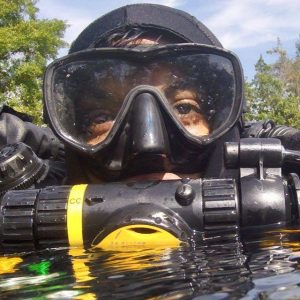 Dharshana in his diving gear

Other notable shipwrecks in Sri Lanka

Notable shipwrecks off Sri Lanka’s coast include the HMS Hermes, the first purpose-built aircraft carrier in the world which sank during World War II. Shipwrecks like the Hermes have great potential value, Jayawardena said, because of their historical value, and the opportunity to see both the marine wildlife within the ship and the things like guns and ammunition that were used in World War II ships (this ammunition is very likely still dangerous though and must be approached with caution).

The HMS Perseus is a World War I-era wreck that also provides a beautiful snapshot into World War I ships as well as how shipwrecks can become a hub of marine biodiversity. There are also shipwrecks like the World War II ship the HMAS Vampire, which is believed to have fallen into a deep trench, out of reach for divers and sonar.

Concluding his conversation, Jayawardena reiterated the potential for shipwrecks to become sources of knowledge and an attraction for tourists and urged for greater protection of shipwrecks going forward.

Cheaper Than Therapy: A night of comedy under the stars!

March 24, 2021 byNews Admin No Comments
Hilton Colombo is back with a revamped high tea menu, including three new varieties. The range includes a set made from locally sourced tea, the traditional British high tea with a Western twist, and