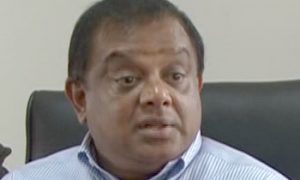 The report which has reportedly revealed that State Minister Sanath Nishantha’s brother Jagath Samantha was responsible for the destruction of the Anavilundawa wetland in Wanathawilluwa has been refuted by the Minister of Wildlife & Forest Conservation C. B. Rathnayake.

“No government officials were involved in or responsible for the destruction of the wetland as revealed in the Parliamentary statement yesterday (9),” stated Rathnayake.

The statements revealed that Jagath Samantha had issued instructions to clear a portion of the Anavilundawa Ramsar Wetlands for prawn farming.

The Government commenced an investigation after receiving reports of an unidentified group having illegally cleared the wetlands for shrimp farming on 25 August, and a conclusive report of the incident is yet to be submitted to the Parliament.

August 2, 2022 byNews Admin No Comments
The Ceylon Petroleum Corporation (CPC) reduced the price of Auto Diesel by Rs. 10 with effect from 10.00 p.m. yesterday (1). Accordingly, the new price of a litre of Auto Diesel will be Rs. 430.

May 12, 2020 byTSM Web Desk No Comments
Out of the 10 Covid-19 cases reported today, 9 have been identified as Navy officers.