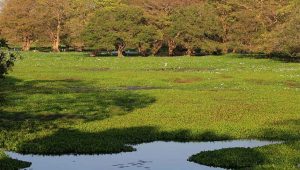 A five-member committee has been appointed by Minister of Wildlife and Forest Conservation C.B. Rathnayake to further study the incident of clearing approximately 0.697 hectares of the Ramsar Convention-recoginsed wetland sanctuary in Anawilundawa, Mundalama.

The committee will be headed by Secretary to the Ministry of Wildlife Forest Conservation M. K. Bandula Harischandra.

Rathnayake gave instructions to take action in this regard and the wildlife officials had reported the matter to the Chilaw Magistrate’s Court.

The backhoe loader used by the suspect has also been taken into custody by the Police.

On Friday (28) evening, a person who was supposedly the backhoe operator was arrested by the Puttalam Police along with the backhoe loader in Mundalama.

Upon questioning the suspect, the Police had been able to collect a lead to the whereabouts of a 35-year-old businessman named Nishantha Fernando.

Both of whom were suspected to be involved in clearing Anawilundawa Wetland Sanctuary were produced before the Chilaw Magistrate’s Court on Saturday (29), after which they were arrested and remanded until 4 September.

Department of Wildlife Conservation (DWC) Director General M.G. Chandana Sooriyabandara said that the Department lodged a complaint with the District Court on 26 August against the wilful destruction of a portion of the sanctuary which took place in the evening of 25 August.

“The initial observations suggest that the area was cleared to set up prawn farms. However, further investigations are now being carried out to trace the perpetrators behind this,” Sorriyabandara told The Morning.

Secretary to the Ministry of Wildlife and Forest Conservation Harischandra on Friday (28) said that a land area of 0.697 hectares had been illegally cleared within Anawilundawa Sanctuary with the use of heavy machinery.

Sooriyabandara noted that charges would be filed under the Fauna and Flora Protection Ordinance and that the incident itself is considered a criminal act against the many species of birds, reptiles, fish etc. that inhabit these wetlands.

The sudden clearance that took place in a section of Anawilundawa Sanctuary earlier this week has placed the present Government in a fix as it is pinned with another alleged incident of environment destruction under the orders of a supposedly influential area politician.

Following the incident, and with environmentalists, media, and even the Parliament itself taking the matter up for debate, the District Court of Chilaw had immediately taken up the complaint that was made by the DWC and issued an order to commence investigations.

“The main responsibility here lies with the North Western Provincial Environmental Authority; the agency can issue an order to stop this destruction in accordance with Article 51 of the North Western Province Environmental Statute, and if they do not comply, the order will serve as a restraining order through the courts. Secondly, the Department of Wildlife Conservation can also act in accordance with Section 7 of the Wildlife Conservation Ordinance,” environmental lawyer Jagath Gunawardana told The Morning.

Gunawardana pointed out that due to the popularity of this area internationally, it will be a major setback for the country’s tourism industry.

“For all these reasons, this destruction must be stopped immediately. Also, open water areas such as prawns and ponds in aquaculture will attract aquatic birds. The consequence of this is the destruction of this valuable ecosystem,” Gunawardana claimed.

State and cabinet ministers too have promptly reacted, with State Minister of Rural and Regional Drinking Water Supply Projects Development Sanath Nishantha taking measures to suspend the issuance of permits and lands for shrimp farming.

Minister of Industries Wimal Weerawansa too opined that no one should misuse the public mandate that appointed a Sri Lanka Podujana Peramuna (SLPP) Government with a two-thirds majority to destroy the environment.

This protection has also ensured the security of a large number of fertile paddy lands and the continued existence of a number of plantations, thereby securing the livelihoods of many locals.

The devastation caused by prawn farming in the area in the past has not yet subsided. Despite their strong opposition to aquaculture in the past, this time they will be helpless in the face of the political power behind it.

This would undermine the region’s recognition of the Ramsar Convention, as well as Sri Lanka’s national commitment to the mangrove restoration programme and to the world.

The DWC, in collaboration with Wayamba University, recently embarked on a programme to rehabilitate the mangrove ecosystem at one end of the sanctuary near the western boundary, which has been largely destroyed. It was done as part of fulfilling the national responsibility as well as national policy and strategy for the mangroves.

June 22, 2021 byMihi Perera No Comments
An investigation is to be conducted on allegations of harassment in media institutions alleged by female journalists on Twitter, the Minister of Media and Information Keheliya Rambukwella said at the