Among the many iconic figures that dominate Sri Lanka’s film industry, veteran actress Kala Keerthi Anoja Weerasinghe secures a significant place. She began her career in acting as a teenager, and has since come to be known as one of the most accomplished and beloved stars of the island. Her many accomplishments include the Silver Peacock Award for Best Actress at the New Delhi International Film Festival in 1987, making her the first local actress to have won such an international award. 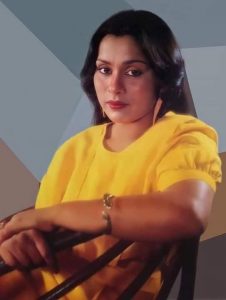 She has also captured the hearts of many with her work broadcasted on television and characters from stage plays. Weerasinghe rose to fame with her contribution to creations such as “Jullietge bhoomikawa” (1998), “Maldeniye Simion” (1986), “Obata divura kiyannam” (1985), “Obata rahasak kiyannam” (1989), and “Siri medura” (1989). She has also worked on numerous international productions, including movies directed by the world-renowned Director Paul Cox.

However, at present, acting and performing have taken a back seat in Anoja’s schedule. Brunch chatted with Weerasinghe about what she’s currently working on, and how current projects impact and drive positive change within society.

The Abhina Academy of Performing Arts

In the mid-1990s, after completing her education at the London Academy of Music and Dramatic Art (LAMDA), Weerasinghe returned to the island, where, alongside a teacher from London, she initiated monthly workshops for those interested in learning performing arts.

With the devastation brought on by the tsunami in 2004, she took her workshops on the road for the first time. Her intention to search for young talent amongst the victims of this disaster and bring them back home to Colombo to be trained was fulfilled. Thus, on this journey from Jaffna to Hambantota, she was surprised by countless gifted individuals. Weerasinghe selected 50 such persons to be trained and rehabilitated following their traumatic encounter. 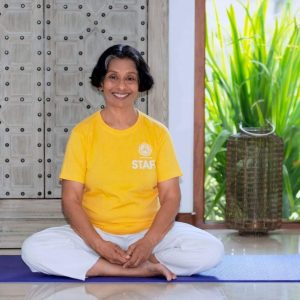 Hence, the Abhina Academy of Performing Arts was officially established in 2005, at the Bellanwila Temple premises. “These premises were not being used when I initially visited the location. Hence, it was unusable and damaged. However, with the blessing of the chief incumbents of the temple at the time, we restored the building with the intention of putting it to good use. And we did,” said Weerasinghe.

The training provided by the academy changed and saved lives. The trainees were taught to perform, sing, and dance, which was viewed by many to be a form of therapy. They were also flown to London and given the opportunity to perform at the Edinburgh International Festival, where their talents were recognised and appreciated.

Following the end of the 30-year-long war in Sri Lanka, Weerasinghe decided to take her workshops back on the road in search of more talented young people. She left no stone unturned on her travels to places that were severely affected by the war. “I took the workshops to unimaginable places. Since I managed to do great work with the victims of the tsunami, I had faith in my ability to make an impact on the children affected by the war. We found our way to numerous camps managed by the Sri Lanka Army that sheltered former LTTE child soldiers. Though it was understandably difficult to obtain permission to enter such premises, we were eventually granted access to carry out our academic work as a part of their rehabilitation process. We found unbelievably talented and beautiful individuals at these camps. We trained them and watched them blossom in the Sri Lankan movie industry and various other fields,” added Weerasinghe.

During the rehabilitation process of these children, they were given nothing but love and hope by the members of the armed forces and trainers from Abhina. Although one would consider it challenging to blend in with these individuals, Weerasinghe fit right in and embraced the task wholeheartedly. Her humble and kind personality, along with a few other tactics, paved the way for success. She added: “My fluency in Tamil was one of the key elements that helped me win their hearts. I began our workshops by singing a Tamil song and the children were thrilled by it.”

The Abhina Academy of Performing Arts has changed the lives of many individuals, including the ones affected by these natural and man-made disasters. Performing is also a method of meditation, as viewed by Weerasinghe. Hence, she considers the therapeutic factor of these workshops to have helped many overcome stressful and traumatic pasts. 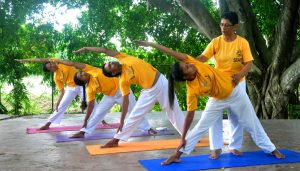 Yoga is a discipline that yields lifelong benefits for the yogi, as it customarily revolves around meditation and muscle movement. Yoga is also considered a subjective science that focuses on the physical, mental, social, and spiritual balance of an individual.

Weerasinghe trained as a Yoga Acharini at the Sivananda Yoga Ashram in India prior to establishing the Abhina Yoga Ashram in 2008. This expanded the activities offered by her institute, as well as the audience she was reaching.

At the Abhina Yoga Ashram, one’s happiness, mindfulness, health, and thinking patterns are given much focus, along with many other aspects. According to Weerasinghe, this lays the foundation to lead a happy life and to tackle any obstacle one may face in their daily life.

“We conducted regular workshops for the Army and also the Navy. Although our workshops were brought to an abrupt halt with the Covid-19 pandemic, I managed to conduct a few sessions for our frontliners during the past few months. The workshops were extremely beneficial given the stress and anxiety they face daily while on duty,” said Weerasinghe.

People from all walks of life have been welcomed at this Yoga Ashram. Celebrities, healthcare workers, students, members of the armed forces, and teachers are some of the beneficiaries of this Ashram. Furthermore, Weerasinghe explained her plans to open the doors of her Ashram to more age groups interested in experiencing the benefits of this discipline. 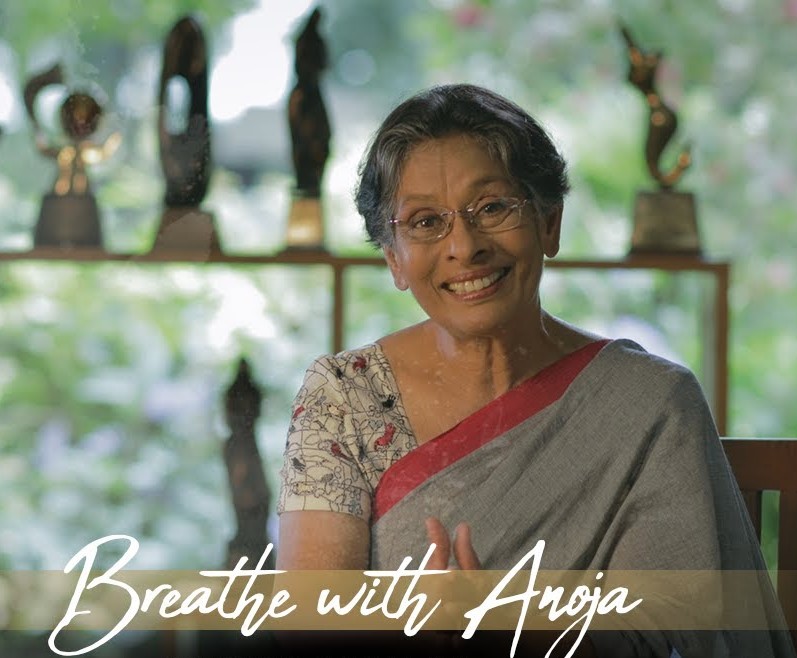 The “Breathe with Anoja” YouTube channel is the latest project undertaken by Weerasinghe. This channel was launched in December 2020 following numerous requests made by supporters of Weerasinghe. Hence, with the restrictions placed by the pandemic, virtual sessions were considered the best alternative.

“My experience and knowledge about technology is very limited. Thus, at first, launching my own YouTube channel was not a feasible idea. I cannot take full glory for the success we have achieved within the last 11 months. Channa Deshapriya, one of the best and most popular cinematographers in the country, alongside many others, are the true heroes behind the scenes,” stated Weerasinghe.

The episodes uploaded on this channel focus on various topics. Things as simple as the correct method of breathing and walking, to posture correction exercises and voice training are taught by Weerasinghe on this channel.

Weerasinghe further stated: “People misuse the internet. But if one was to truly focus on the benefits, including the global platform it has created for potential learners, they would be mesmerised. Therefore, use these online sessions for the betterment of your life. An incalculable amount of people from across the world have contacted me and expressed their gratitude for the work we do. To know that our work has reached a global audience and has had a positive impact on their lives makes me incredibly happy.”

When inquired about the future of the channel, Weerasinghe explained her thoughts of introducing her teachings in English in order to create accessibility for her international listeners and non-speakers of Sinhala.

Creating an affordable and practical learning experience for her students has always been a top priority for Weerasinghe. Moreover, promoting mental health and planting seeds of gratitude amongst the population of Sri Lanka have also been part of Weerasinghe’s focus during her programmes.

Commenting on the love and respect she receives from her students, she said: “One must build a good teacher-student relationship in order to effectively teach any art. That was an easy task for me given that I was already a household name and that people have known me for many years. My students have accepted me as a part of their families.”

Changing one life at a time 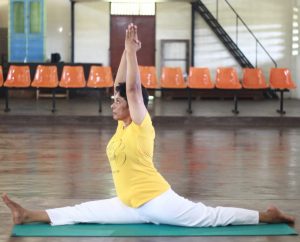 Weerasinghe’s qualifications, alongside the skills and experiences gained through her career in acting and days performing, undoubtedly assisted her to establish such successful programmes. “I came to Colombo from a remote village in Monaragala with nothing but a few clothes in a bag. Today, I have accomplished more than I could have dreamed of. For this I am truly grateful.”

Weerasinghe praises her fans for changing her life with their love for her and her work as an actress. Thus, she considers it to be a duty to return the love by serving the community. Being a believer of “karma yoga” – selfless acts performed for the benefit of others – her biggest motivation is to give back to the people even if it is through volunteering. As she explains: “I do not even expect a ‘thank you’ in return for the work that I do. Nonetheless, it brings me great satisfaction to give back.”

Weerasinghe also expressed her thoughts on the importance of having a positive outlook on life despite the many challenges one may face. “People simply look for reasons to complain about and create arguments. Being born a human itself is a great blessing and we must appreciate life. The more expectations we entertain, the more disappointments we are dealt with. Therefore, change yourself, focus on yourself, and surround yourself with positivity.”

Regardless of the hardships faced, Weerasinghe is determined to take her work to great heights in the future, and encourages everyone to join her on this journey while acquiring benefits for oneself.

More information on upcoming projects and workshops can be obtained by contacting Weerasinghe on 0772292662.

March 15, 2019 byRandev No Comments
YouTube star Lilly Singh, has received word that she will be hosting her very own late night show on NBC.