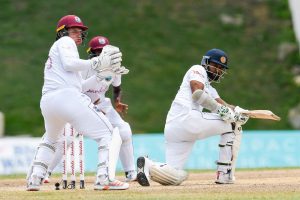 The second and final Test between Sri Lanka and West Indies ended in a draw on Friday (2).

The last two days saw many hours were lost in the match due to rain.

West Indies Captain Kraigg Brathwaite was adjudged the Player of the Match for his 126 and 85 runs in the two innings. Suranga Lakmal was the Player of the Series for his series tally of 11 wickets for an average of 21.45.

Dimuth Karunaratne was seen coming back to his form with 75 in the Lankans’ second innings on Friday while Oshada Fernando made an unbeaten 66.

July 18, 2021 byRevatha No Comments
The Chess Corner by Dulan Edirisinghe

Tickets sold out for second T20I

March 6, 2020 byRevatha No Comments
Tickets for the second and final T20I between Sri Lanka and West Indies at Pallekele are sold out, SLC announced