April 5, 2020 by Charindra No Comments
By Charindra Chandrasena
Sri Lanka’s top apparel exporters are struggling to pay salaries due from this month onwards to their massive workforce owing to a lack of working capital across the industry, according to Joint Apparel Association Forum (JAAF) Chairman A. Sukumaran. 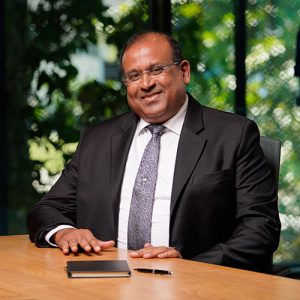 “While most companies have pledged to pay March salaries, a vast majority of the industry will struggle to pay salaries from the end of April onwards,” Sukumaran told The Sunday Morning Business on Friday (3).

He attributed this situation to the demands of customers overseas who have been severely affected by the Covid-19 pandemic.

“Working capital across the industry has been decimated. This disastrous working capital situation is due to a multitude of factors driven by the coronavirus such as the cancellation of orders already produced, forced discounts, delayed payment terms, and cancellation of orders that Sri Lankan entities have assumed liability for through the purchase of necessary raw material,” Sukumaran added.

It is estimated that the apparel sector provides livelihood to around one million employees and contributes over 44% of the national export revenue.

“I think the primary goal of all our participants is to do what is best by our workforce. While measures such as pay cuts are inevitable, I believe most players are considering relative income bands and ensuring any reductions are reasonable and do not adversely impact lives to an unreasonable degree.”

The apparel sector has been severely impacted due to the prevailing pandemic with JAAF foreseeing an immediate contraction of $ 1. 5 billion in Sri Lankan apparel exports during the three-month period ending in June compared to the previous fiscal year.

“The damage does not stop there as we expect further demand contractions that could result in reductions in apparel exports by an additional 30-40% after June. This, mind you, is our best-case scenario,” he noted.

Apparel is one amongst five sectors that has been granted with the Government’s six-month moratorium and 4% working capital loan.

However, JAAF is hoping for further assistance from the Government to mitigate the impact as the problems have been escalated since then.

“When these relief measures were granted, Sri Lanka’s primary issue was a supply chain problem related to raw materials coming in from China. Currently, the problem has evolved to become one of demand contraction. This new problem would require further measures to avert the disastrous outlook for the industry,” he added.

When asked about the impact on the apparel sector operation due to the curfew, Sukumaran noted that the current curfew is prudent in preventing the accelerated spread of the novel Covid-19.

However, he added that the extended curfew might cause more losses than the initially projected losses and it also has the potential to delay production, which in turn could result in those orders in production getting cancelled.

According to him, the impact of the curfew is compounded by the fact that Sri Lanka’s apparel competitors such as Vietnam, Cambodia, and Indonesia are completely operational, therefore even the few orders Sri Lanka could be getting are being diverted due to the uncertainty on when Sri Lanka will begin work again.

“Sri Lanka is being left behind as our competitors continue to ignore the threat at hand and carry on with business as usual. The industry players are exploring all (the) new markets in play, particularly those related to new products currently in demand in Europe and North America. However, any effort is handicapped as a result of being unable to work in the current situation,” he added.

He further noted that currently, as with most of the world, the virus is setting the timeline for recovery and the apparel businesses have formulated many plans to attempt to save the industry. However, they are hindered by an inability to act on them.

Sukumaran also confirmed that raw materials will continue to be imported without any hindrances as the recent restrictions on imports do not apply to raw materials.

Last week, an internal memo of Sri Lanka’s largest apparel exporter Brandix Lanka Ltd. (BLL), which has been seen by The Sunday Morning Business, stated that it is cutting all executive cadre salaries by between 5% and 60% depending on salary levels, while its Board and Chief Executive Officer (CEO) were foregoing their compensation for the next six months.Furthermore, BLL is freezing capital expenditure and differing discretionary expenses while temporary staff are being disconnected and new contractors and consultants have been put on hold.

Other large apparel companies are also understood to be considering cost-cutting measures, although it is as yet unclear whether these would involve salary cuts.

Project due diligence in the public sector

July 12, 2020 byCharindra No Comments
Chartered Accountant Ranel Wijesinha discusses the importance of project due diligence in the public sector through a look back at former Finance Minister Ronnie de Mel’s 1977 address to Parliament.

May 17, 2022 byNews Admin No Comments
Ceylon Petroleum Corporation’s (CPC) public debt has reached Rs. 561.3 billion in 2021 while making an operational loss of Rs. 41.7 billion in the year, Central Bank of Sri Lanka’s annual report for 2